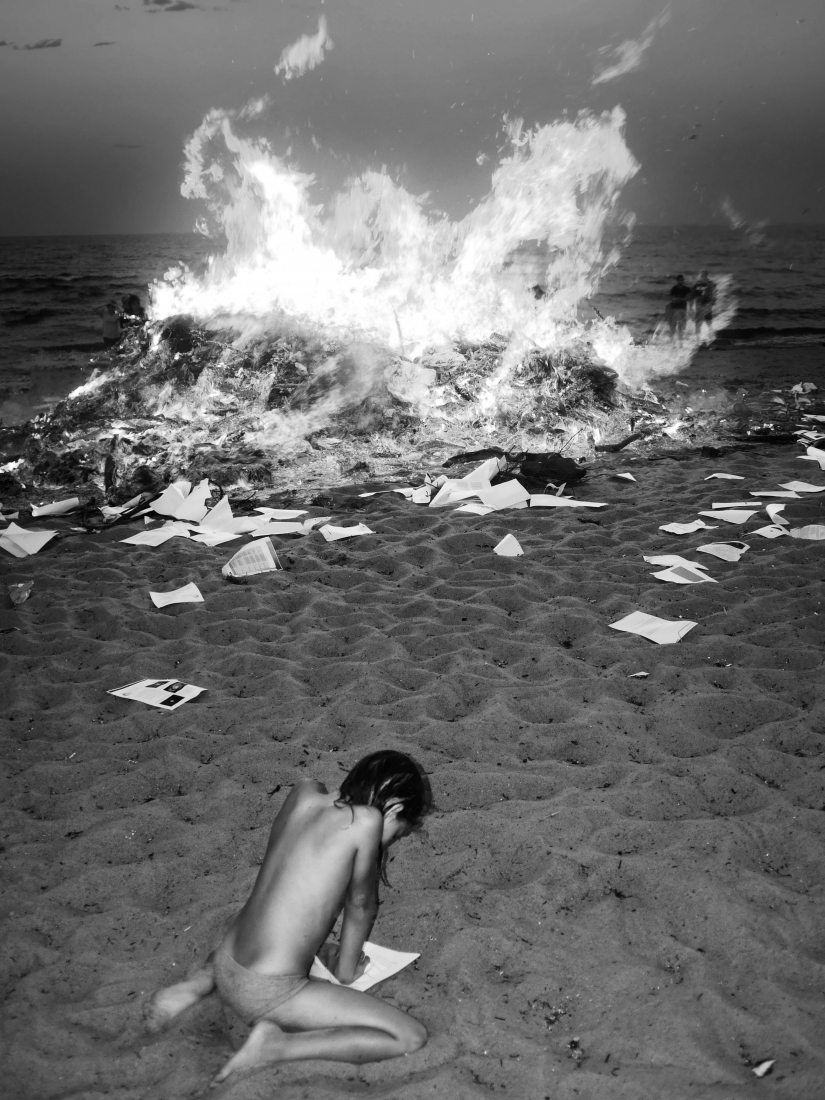 The picture captures a child holding down a sheet of paper to prevent it from flying away with the wind. Meanwhile, hundreds of papers are flying away in the background and countless more are getting burned on the fire.

This is what we see in this picture.

I do not like to tell people what they should get out of the picture, I prefer to leave it open to free interpretation as that leaves it more impactful to a wider audience.
If you forget about the surface of the picture and dig a little deeper into the realm of metaphors then to me the picture gets an extra layer.

I use this image as a visualization of my inner life as a person with ADHD and Autism Spectrum Disorder. With all the papers flying around, the child desperately holding on to one while the rest is burning in the background I find incredibly relatable but in my eyes, it is conveyed in a poetic and beautiful fashion.

The picture is not staged, it is taken during the summer solstice in Denmark. Each summer people gather around the big bonfire that in medieval times was used to burn witches. Nowadays they stick to witches made of papier mâché.

Patrick is a documentary photographer currently living in Copenhagen, Denmark. He graduated from Fatamorgana Danish School of Art and Photography in 2014 and in summer 2019 he finished his BA in Documentary Photography at University of South Wales.

Born in the suburbs of Copenhagen in 1988, Patrick had a hard time relating to others, he felt different and lonely without being able to pinpoint the reason why.
He was not lacking friends or people that loved him, the reason behind was hard to explain.
Repeatedly unable to put thoughts and feelings into words, Patrick eventually found photography and it became the language that could fill out the voids.
Whenever he would see a motif that pricked him, he would grab it. Each time he saw a question that he was also asking, he would seize it. He was collecting pictures to understand himself and perhaps the world around him.
Although there is a lot of desperation for finding strong connections or answers in his pictures they are taken with a lot of love.

In January 2022 Patrick was diagnosed with ADHD and Autism Spectrum Disorder at age 33. It might explain some of the lingering feelings that have been with him all of his life.
The reason why he has been so driven to understand himself better. It is likely it has instilled a great level of responsiveness to his surroundings, and sharp attention to details and patterns.
Patrick's quirky eyes rarely offer a conclusion or answers, however, you might recognize some of the questions or motifs yourself, as a big part of his work is looking at what it means to be human.
SHARE
Support this photographer - share this work on Facebook.
< BACK TO GALLERY