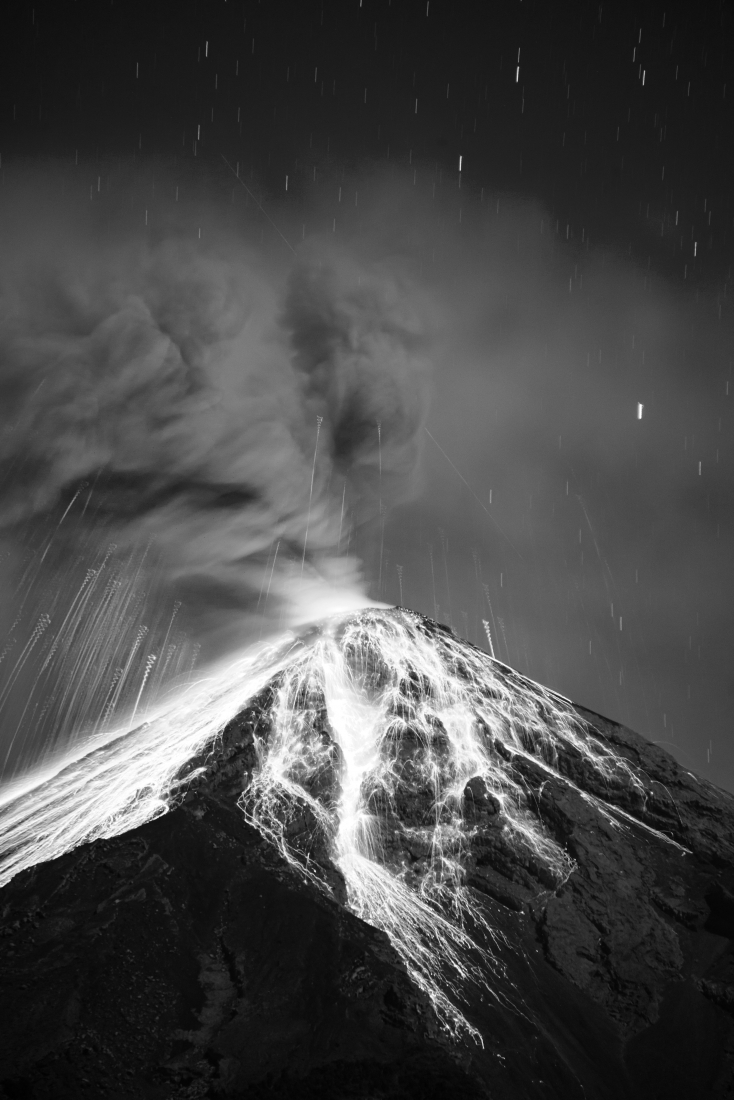 I was looking to make a beautiful image of this volcano making an eruption, but the only possible time to get an image like this is from November to February. So I was waiting for this time all year long, watching the rain and the clouds cover Volcan de Fuego for months. As soon as i saw November was coming I made some arrangements to go visit my secret spot and try to get a beautiful image of this huge eruptions. The first night I went was already in the middle of November, but I didn't have any luck with the clouds. I got a pretty nice picture, but it was not what I wanted so I knew I had to come back, and I did. Four more times until i got this beauty of an image. During the process of getting this image right I discovered it was best to start the 30 second long exposure once the lava was in the air. This way I knew I was not blowing out the highlights and I was still getting this beautiful tracks of the lava rocks falling from the air. Volcan de Fuego is situated next to Antigua Guatemala about 1 hour from Guatemala city. It is still waiting for me to come back and take some more pictures and time-lapses.

Daniel Lopez (30) was born in Guatemala City, Guatemala in 1991. He lived in Guatemala City until his high-school graduation in 2010. After graduation he lived in Antigua Guatemala for one year and then decided to go to film-school in Vancouver at Vancouver Film School. After one year of this intensive Film Production Program he went back to Guatemala and started taking lots of pictures and working in the small and independent film industry of Guatemala. After taking so many pictures he made an expo in Antigua Guatemala and sold more than 20 different copies in 2015. He took a path were he ended up being the director of photography of one of the biggest documentaries made in Guatemala called "Serpiente Emplumada", also in theaters it was the most seen Guatemalan production in 2018. Daniel has worked on more than 4 feature fiction films as part of the camera team always. In 2019 he made a big expo with 8 different artists and sold more than half of the pictures he brought to this expo. And in 2021 he was the director of photography of another big documentary called "La Cuenca De La Serpiente", but this time it was a 3 episode series, which is still in post production. Daniel continued to submit images to international contests and now he feels he is on the right path to start submitting even more pictures to contests and maybe even win something.
SHARE
Support this photographer - share this work on Facebook.
< BACK TO GALLERY