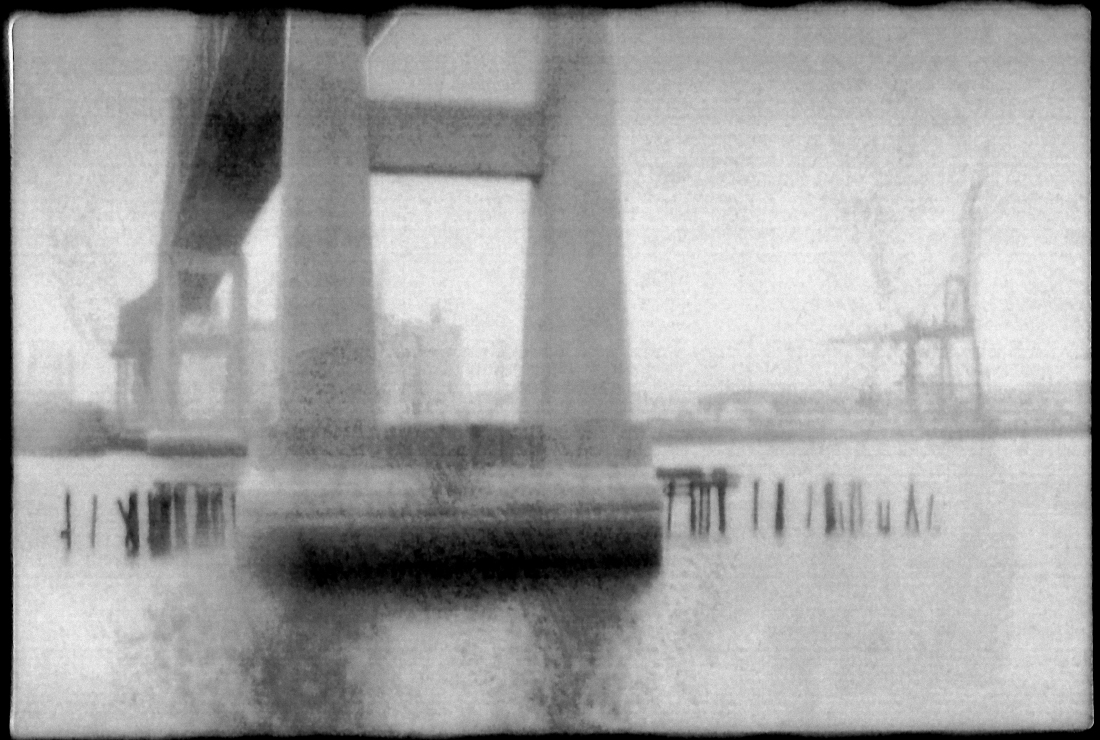 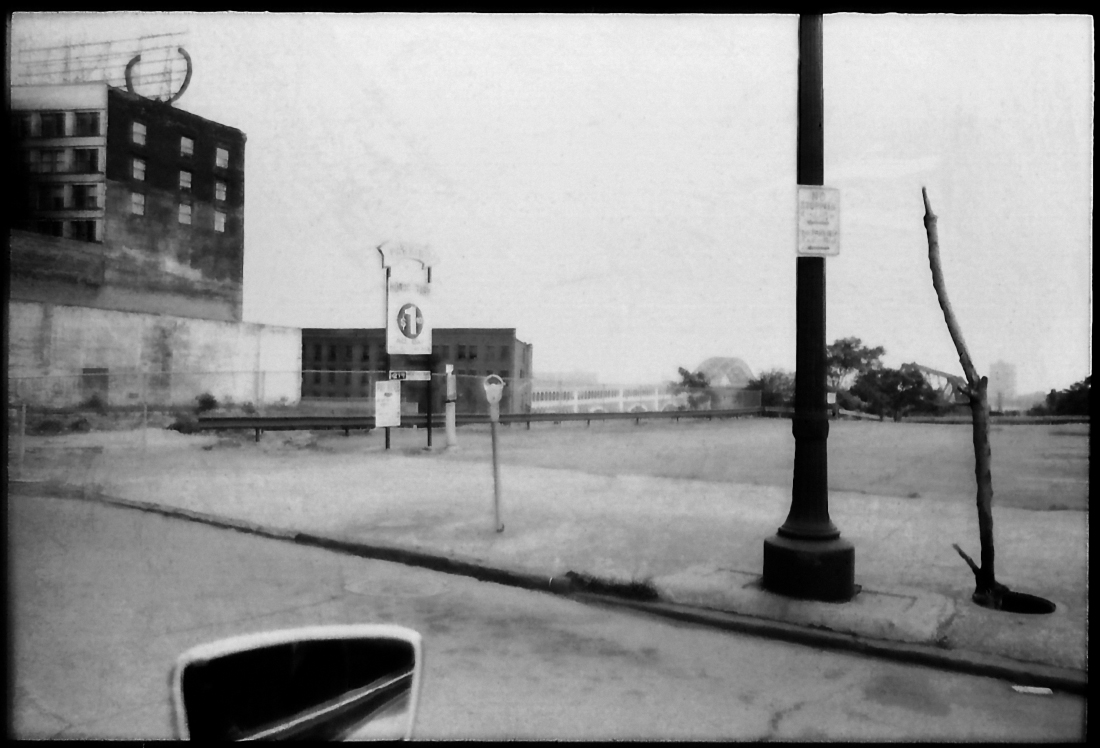 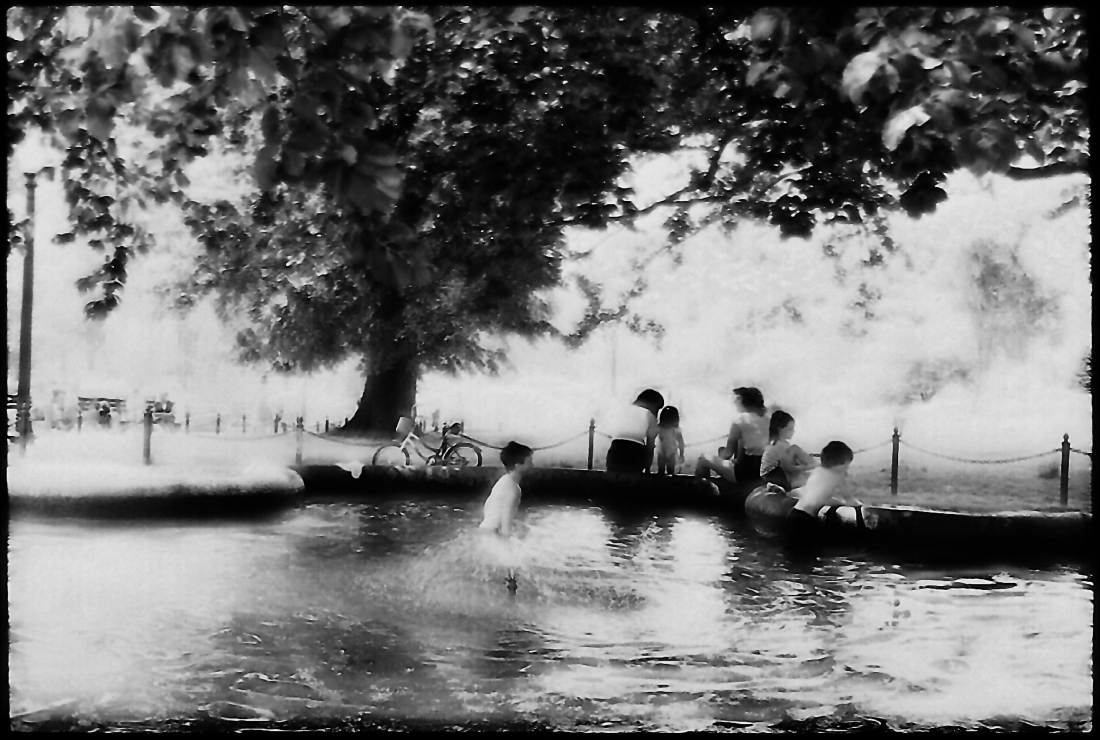 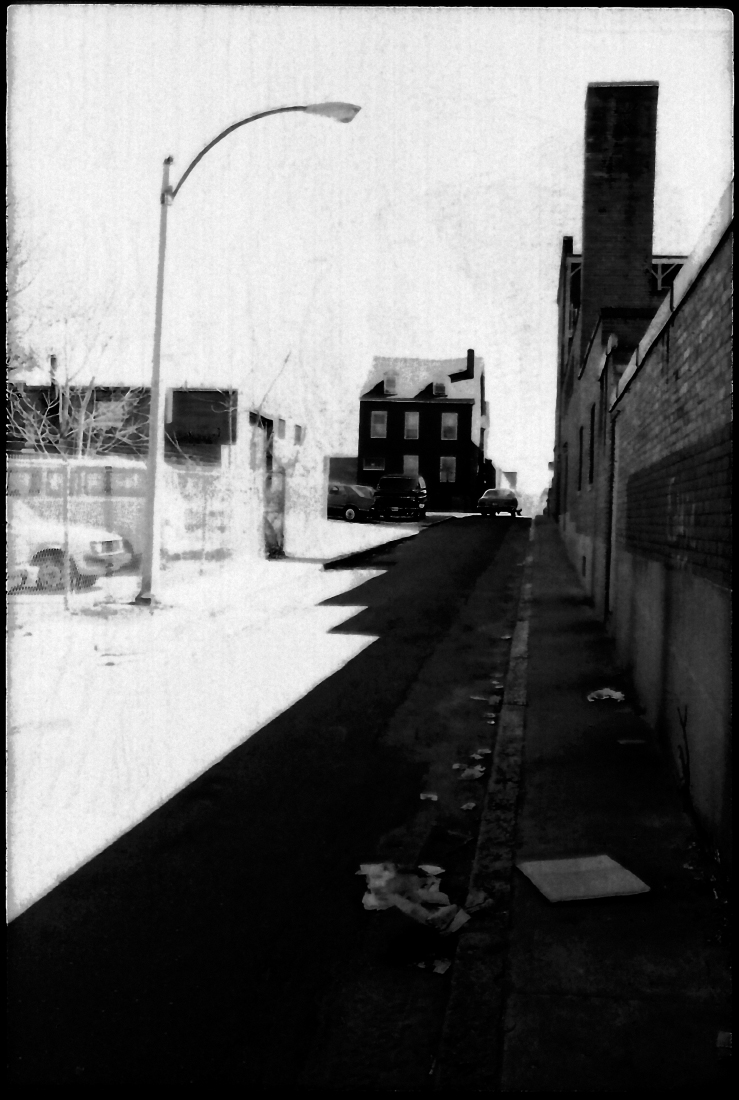 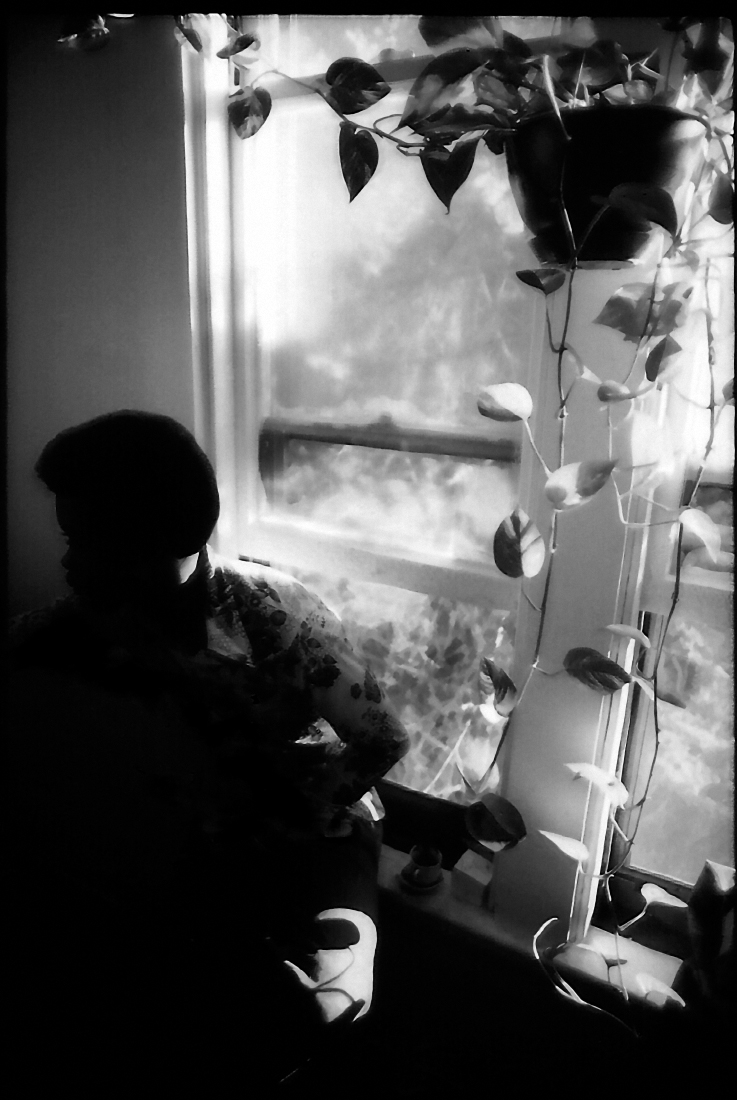 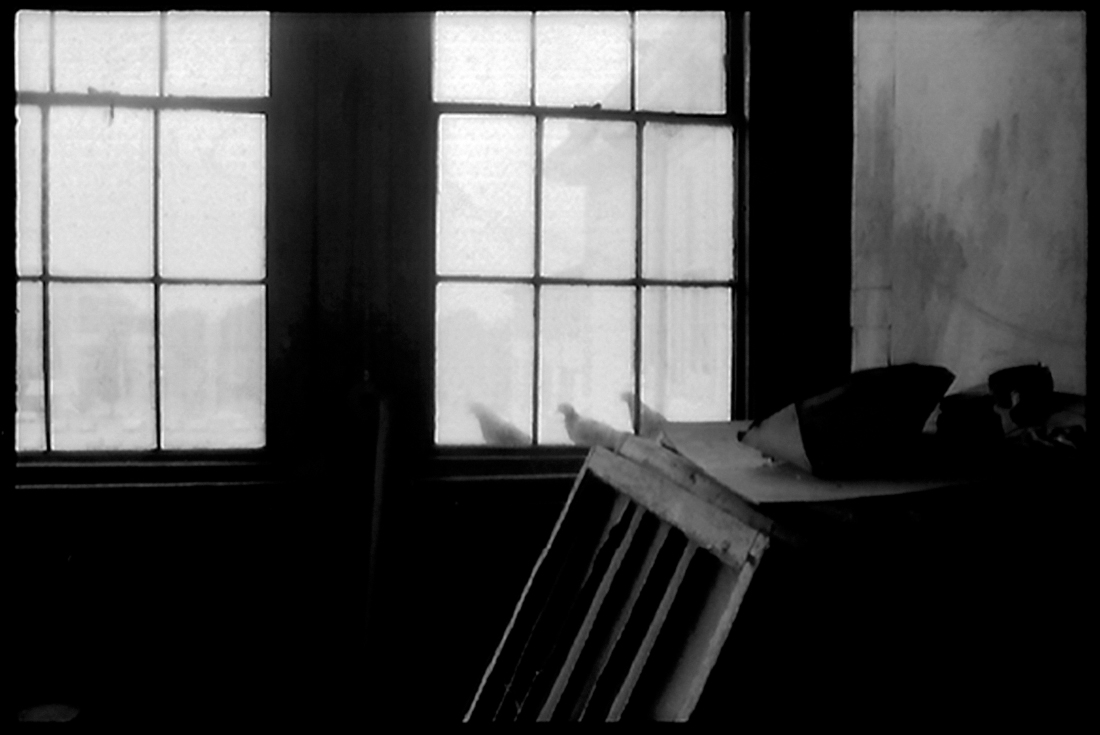 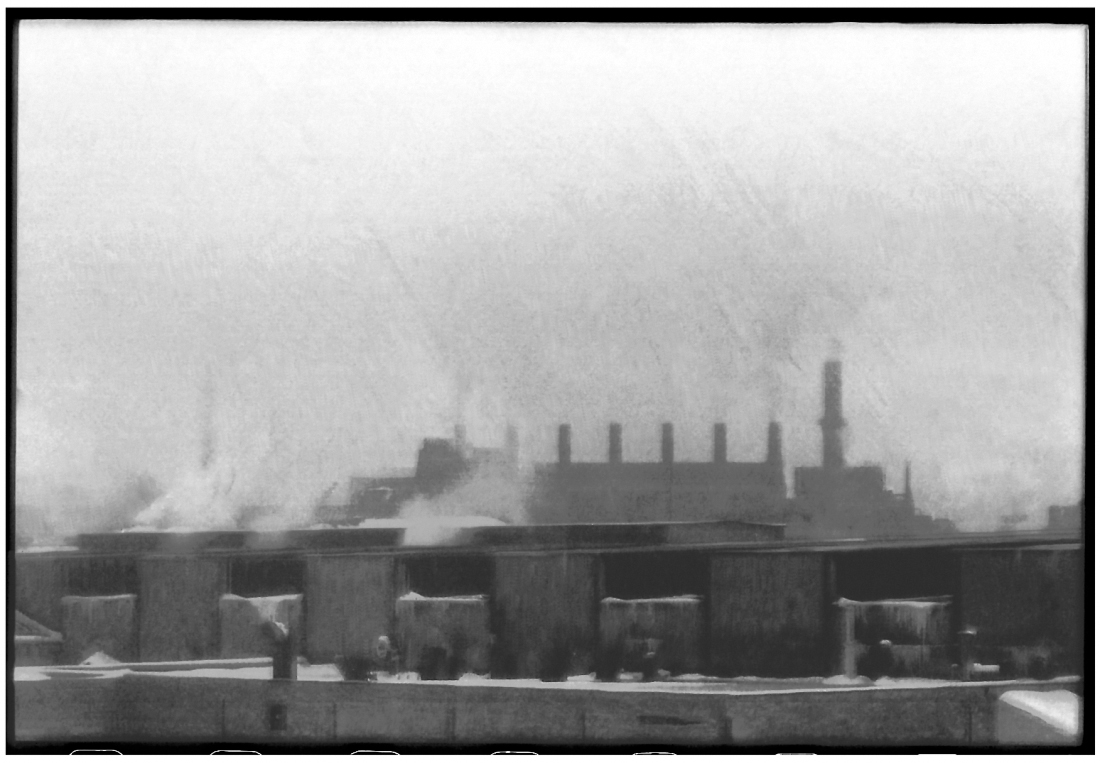 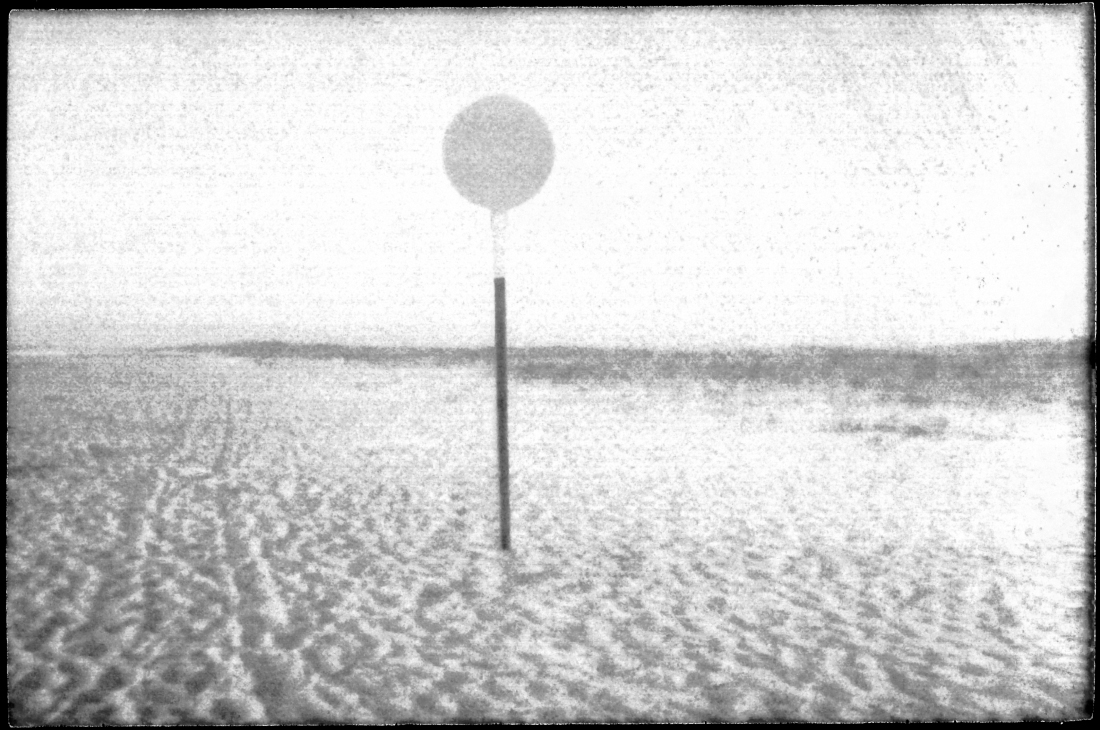 My photography has been predominantly in color, and the B&W negatives over the years accumulated slipshod, often loose and unsleeved in a battered, taped-up cardboard box too small for its contents. Stuffed on a shelf somewhere. Then recently a free extremely cheap scanner provided at least the excuse for a quick digital record. But the bouncing front light of the low resolution scans did occasionally produce an intriguing result. The Crappy Negatives series utilizes this scratched and dirty film with the inappropriate scanner to set the motif for creative resurrection of the old B&W archive. First the sometimes overwhelming incidence of various imperfections is partially removed by hand to find a balance of imagery and effect, the computer allows exceptional control for tone, and specialized enlargement software a sense of sharpness – somewhere. Images are tint printed on Epson Signature Hot Press Fine Art paper. In the end, pushing pixels here can feel a bit like an Impressionist painting Mudhead portraits on a Provincetown beach early in the 20th Century. Paint the light.

Paul Eric’s earliest public work was as an innovator in multimedia with large multiscreen productions including The Concord Conscience for their Bicentennial exhibition, I Am the Afro-American, during Boston’s difficult busing crisis, and the live experimental A Natural History which premiered at the Boston Film/Video Foundation in 1977. For many years he was a creative specialist photographing throughout New England represented internationally by Liaison Agency, his work recognized by Polaroid, Kodak, and Fujifilm, and his printing with an International Cibachrome Grant. Again a pioneer, his expertise was featured in the first edition of Mastering Digital Printing in 2003. His poetry and photography has been published in the Black Earth Institute’s About Place Journal, Wisconsin and Art Ascent Journal, Toronto. Voyageur Press has also published two books of his work in the Mid-Atlantic states. Paul is an invited member of the Lucie Circle, Lucie Foundation, Los Angeles, an elected member of the Connecticut Academy of Fine Arts, and a Guild member at the Silvermine Arts Center in New Canaan, CT. A former gallery director in Provincetown, Cape Cod, he currently maintains a private gallery in Stafford Springs, CT, exhibiting regularly in regional and national museums, most recently including Photoville/Bethel Woods, NY, the Griffin Museum of Photography, MA, the Providence Art Club, RI, and the Center for Photographic Art, Carmel, CA.
SHARE
Support this photographer - share this work on Facebook.
< BACK TO GALLERY