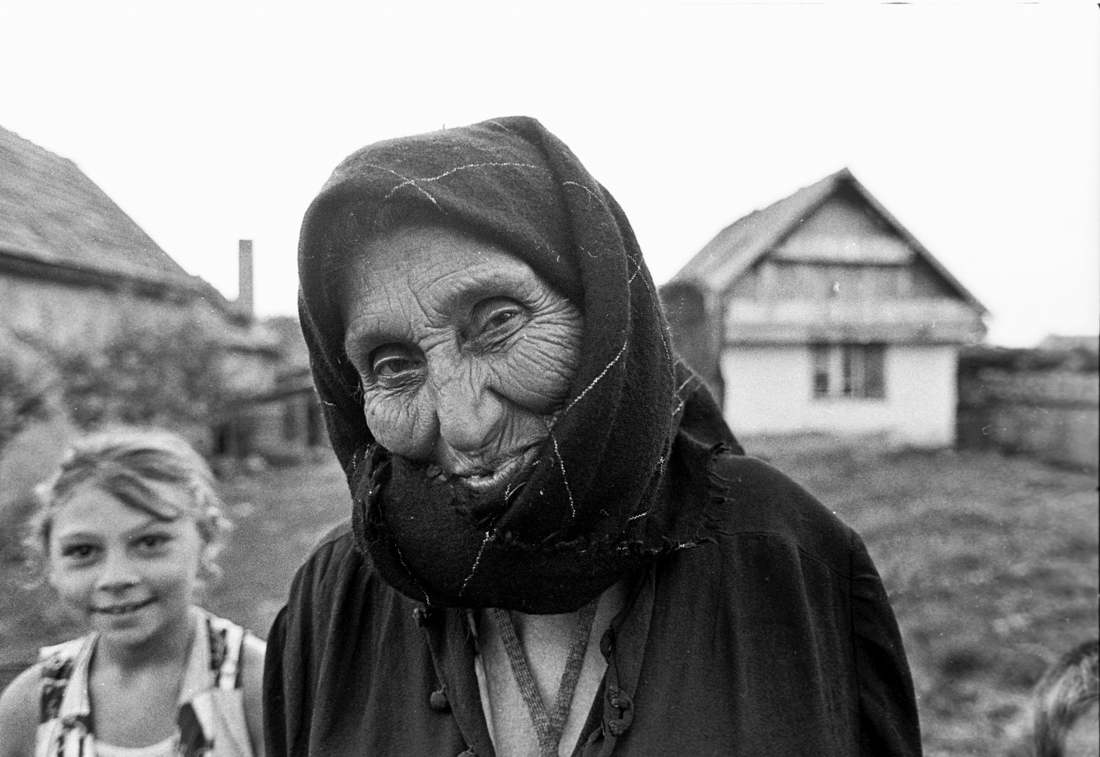 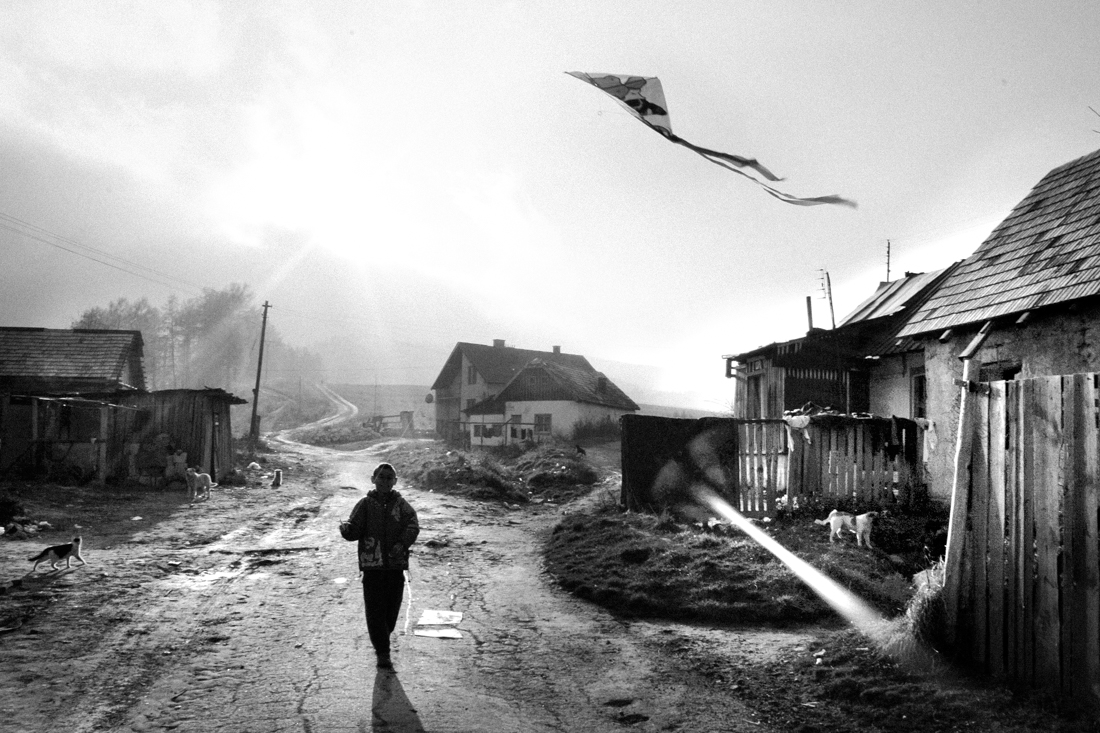 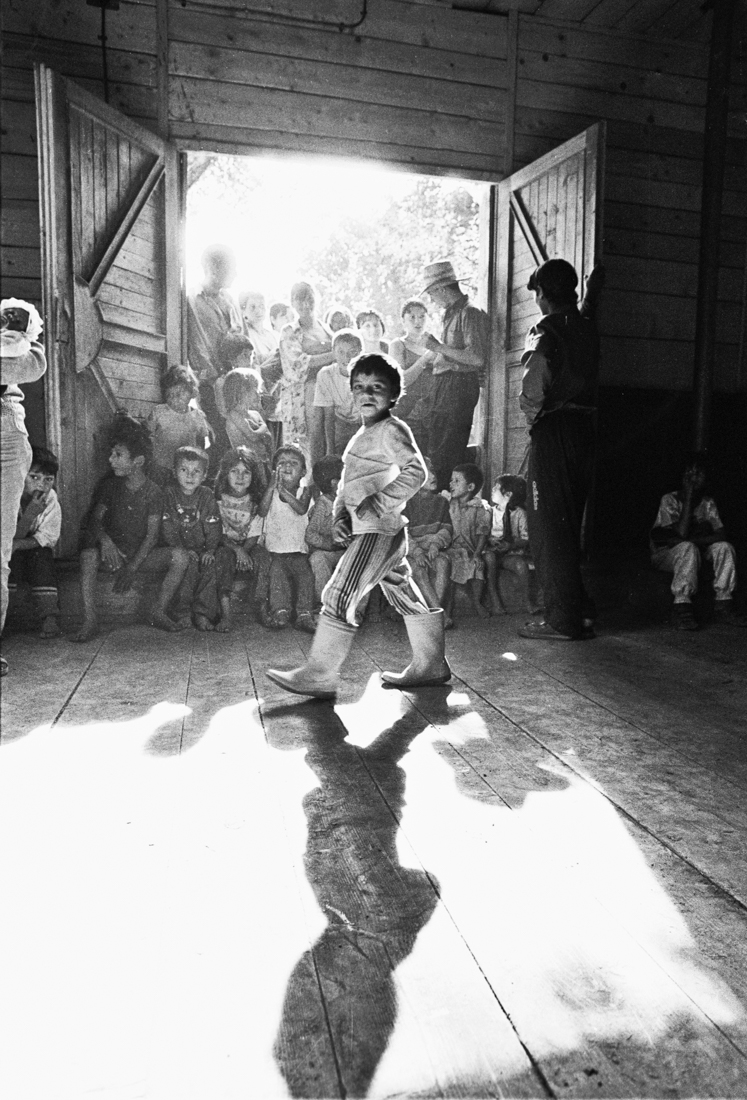 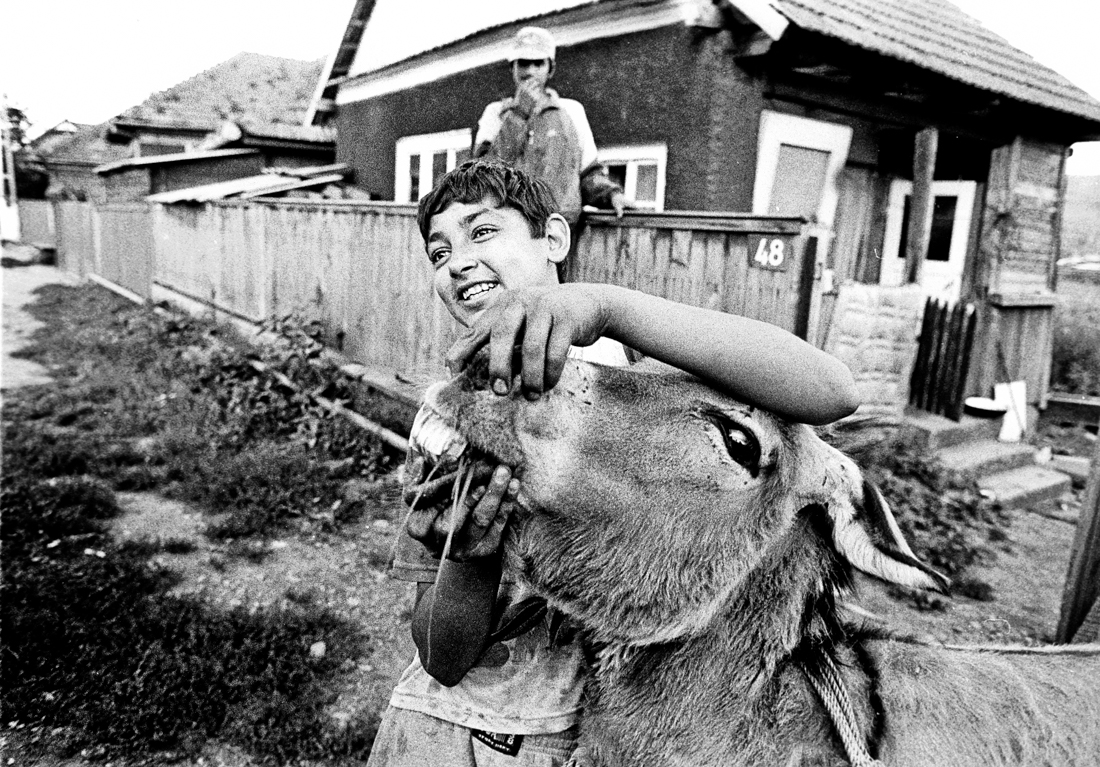 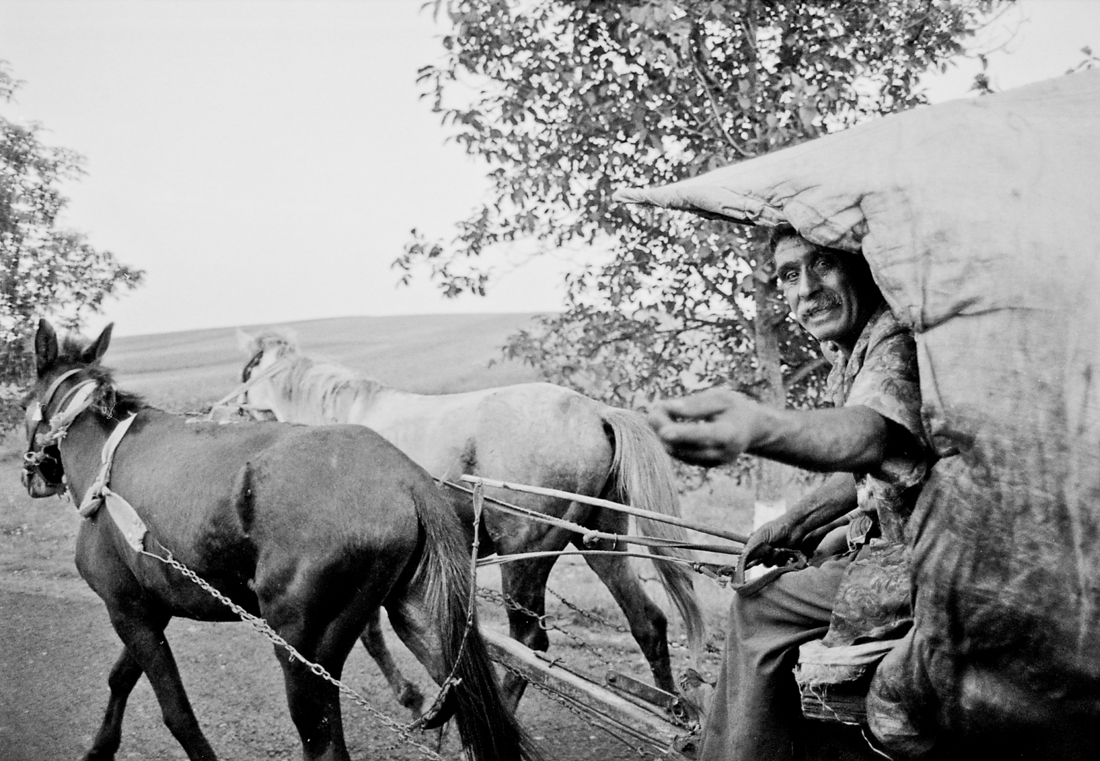 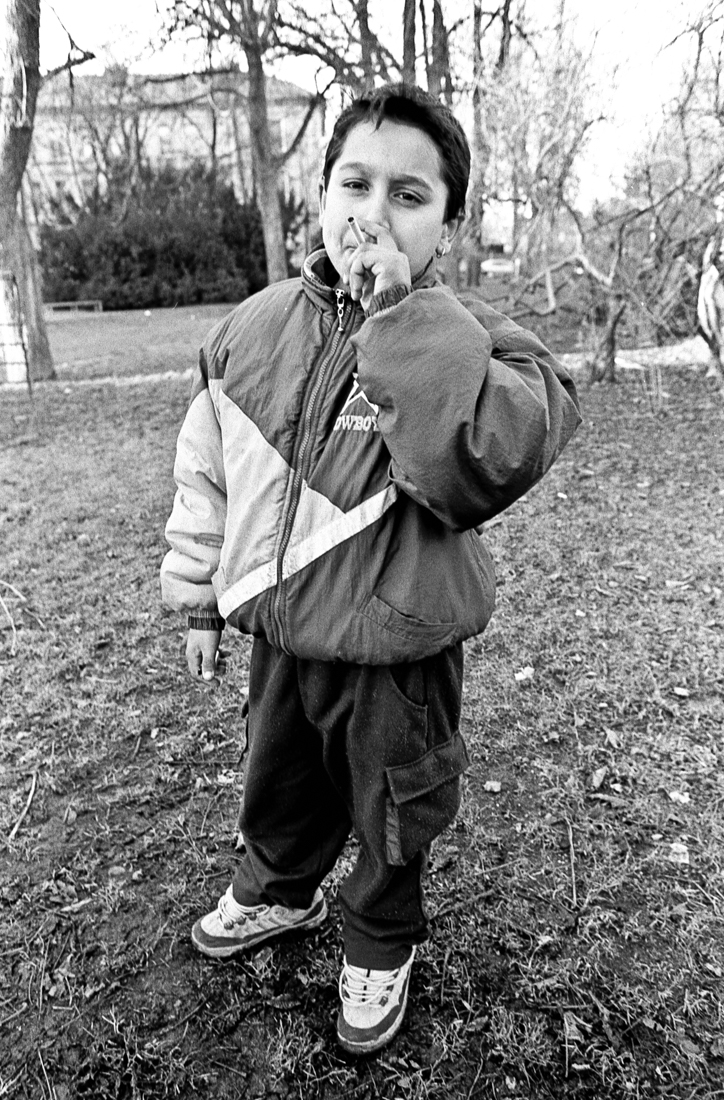 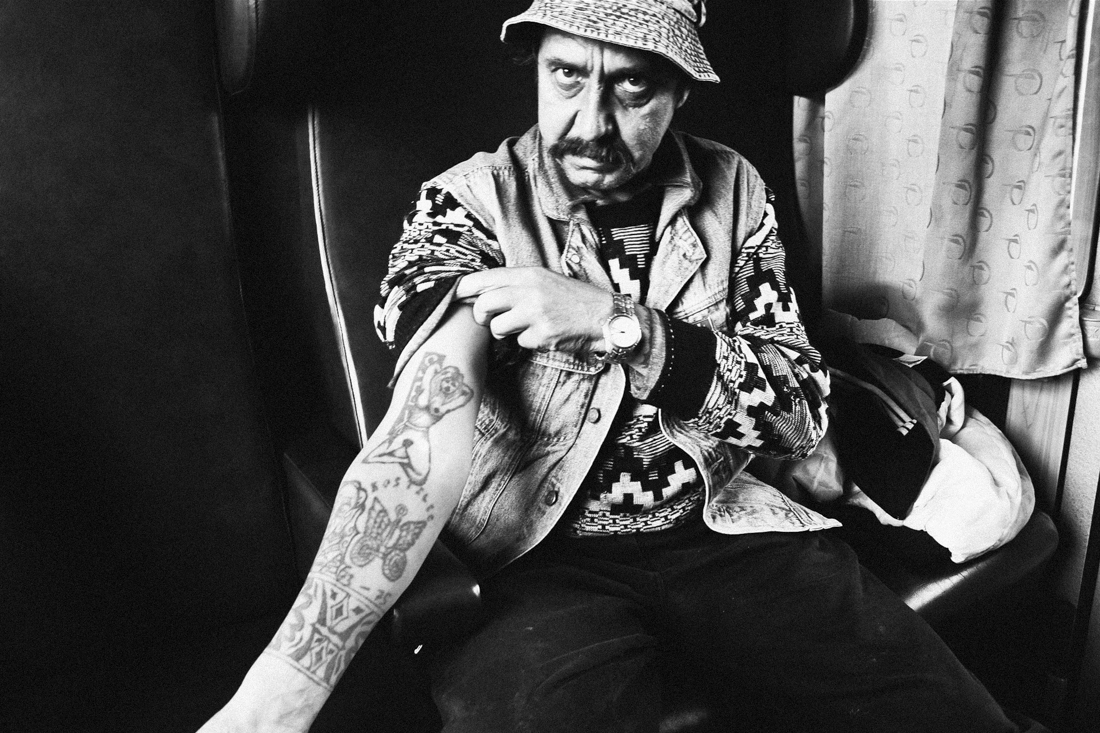 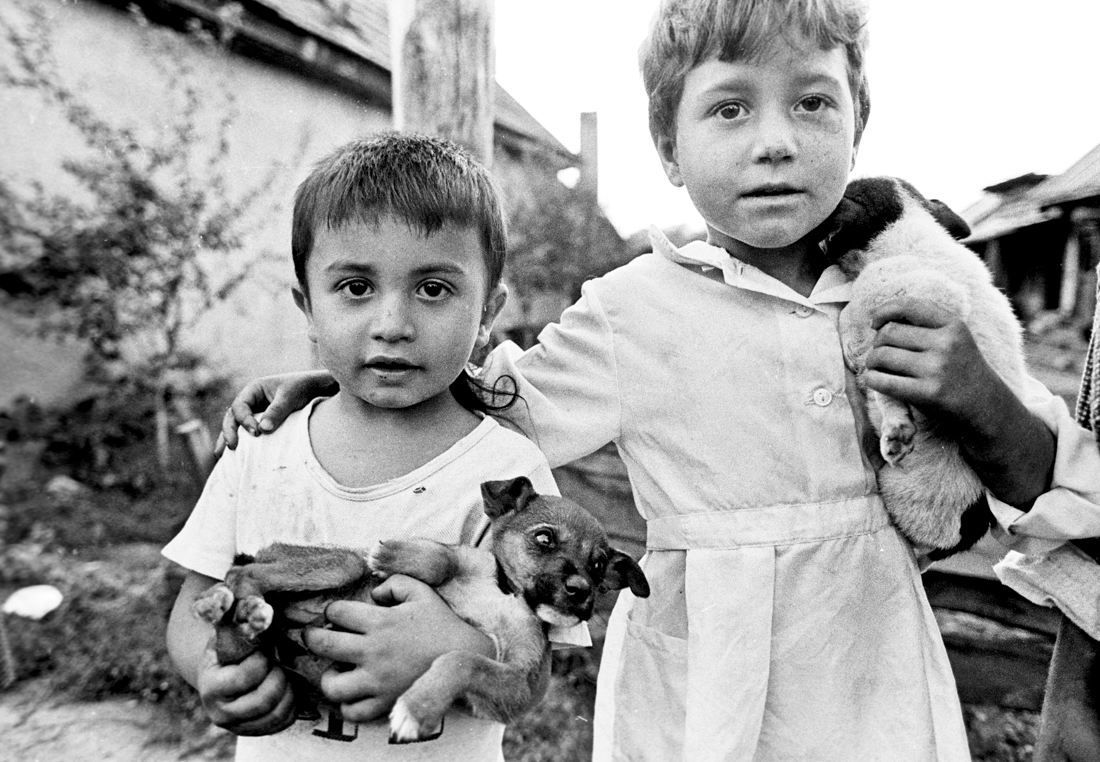 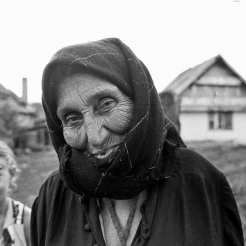 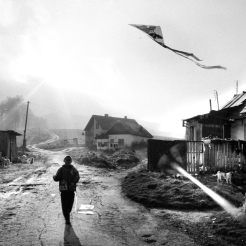 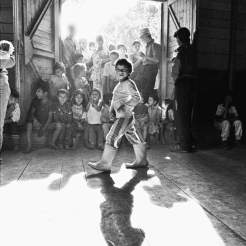 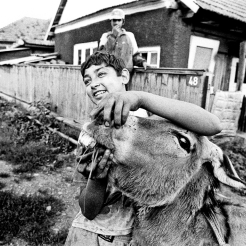 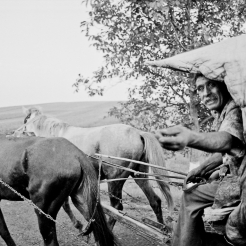 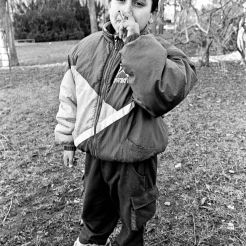 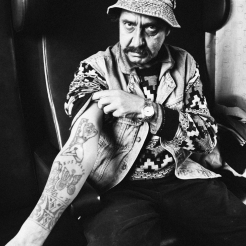 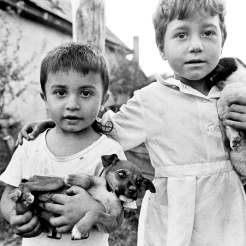 TITLE: Home is Elsewhere -- A budding nomad with the Roma of Eastern Europe.

Amongst the locals but forgotten, below the Tatra mountains of Slovakia and on the edges of Tirgu Mures, Romania, stewing sweet veggies with spicy peppers using long wooden spoons like witch brooms. Hand me down violins, American sports jerseys, and soccer balls. A village bathing in a single communal outdoor tub. The Roma: A people tucked away behind the last, white, cement, communist apartment building. Rough and tumble and giddy with life. I have 8 stitches on my forehead from a long ago fistfight with a pair of local Roma over a misunderstanding in a bar. I've chased a horse drawn caravan up a hill wondering where in the Carpathian mountains it is headed. Witnessed a burial where I could kick myself for  running out of film. I've played soccer with Roma next to "The Pentagon" housing projects on the edge of Bratislava, Slovakia. It seems that deep in my blood I have nomadic tendencies. I use the camera both selfishly and to spread joy. I look forward to looking at my photographs as an old man, but I dread viewing all the different lives I could have lived. This is a series of photographs I took when I was a budding nomad among the experts in Eastern Europe.

Adam Novak is a bilingual photographer and filmmaker of American and Czech descent. He has a Bachelor of Fine Arts from The School of the Art Institute of Chicago. He has co-directed (and co-produced) a 77-minute documentary with his father Jan Novak: Citizen Václav Havel Goes on Vacation. In 2009, they released another documentary, Citizen Havel Is Rolling Barrels, which was nominated for the Czech Lion in the category of the Documentary of the Year. Most recently, the filmmakers collaborated on a documentary comedy: Guns, Pucks, Beer and Dogs recounts the stories of the top army hockey team under socialism. Adam Novak was also the director/photographer of “I Am Chicago” - www.iamchicago.net - (2009-2011). He works in Chicago as a wide format printer "Printworthy.org" and is an avid chess player and hockey player.


"Kenosha Burning" (2020) - A series of photographs from the Jacob Blake protests and riots in Kenosha, Wisconsin.
“HOMELESS IN CHICAGO” (2018-Present) - No website developed. Work in progress photo essay and multimedia project. I buy signs from the Chicago homeless population in exchange for a care package, portrait, and a statement about being homeless.
“SHOT IN CHICAGO” (2017-Present) - www.shotinchicago.org a work in progress documentary depicting gun violence by interviewing its victims in Chicago. Director and Producer.
“I AM CHICAGO” (2009-2012) - www.iamchicago.net - Chicago neighborhood photography project. Portraits taken in a mobile studio documenting 30 Chicago corners spanning 2 years and all seasons.
“CITIZEN HAVEL WORKS IN A BREWERY” (2009) a 74-minute documentary that was shown on Czech National television on the 20th anniversary of the Velvet revolution and watched by over a million viewers. Co-directed with Jan Novak.
“THROWN AWAY” - (2004-2010) a 55-minute documentary about a Chicago gospel singer who is a labeled sex-offender attempting to stay clear of his past and the law.
“AKO SA PIJE V BANSKEJ BYSTRICI” (2006) a 30-minute documentary showing the life and times in 10 very different drinking establishments in small mountain town Banska Bystrica, Slovakia.
“JOE’S FIRST 13 ACCIDENTS” - (2005) a 30-minute documentary and comedy that follows Joe, a young suburban man, back to the scene of all his car accidents.
“3x12, 36 GREAT MOMENTS IN THE HISTORY OF PHOTOGRAPHY” - (2003) a 90-minute documentary, co-directed with Jan Novak.
“TIME IS ON MY SIDE: A PORTRAIT OF BOHDAN HOLOMICEK” - (2003) a 45-minute documentary/biography about a Czech photographer for Czech Television.
Share
Support this photographer - share this work on Facebook.
< BACK TO GALLERY

prev
next
Close
1/8
Adam Novak - Home is Elsewhere -- A budding nomad with the Roma of Eastern Europe.