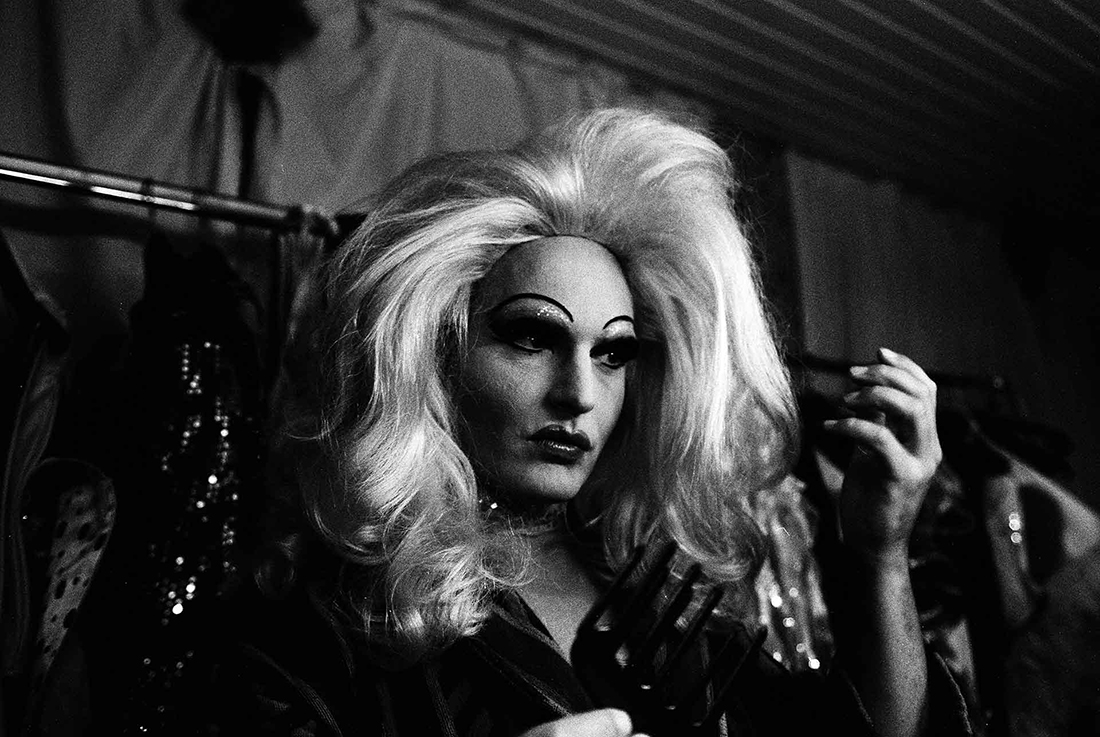 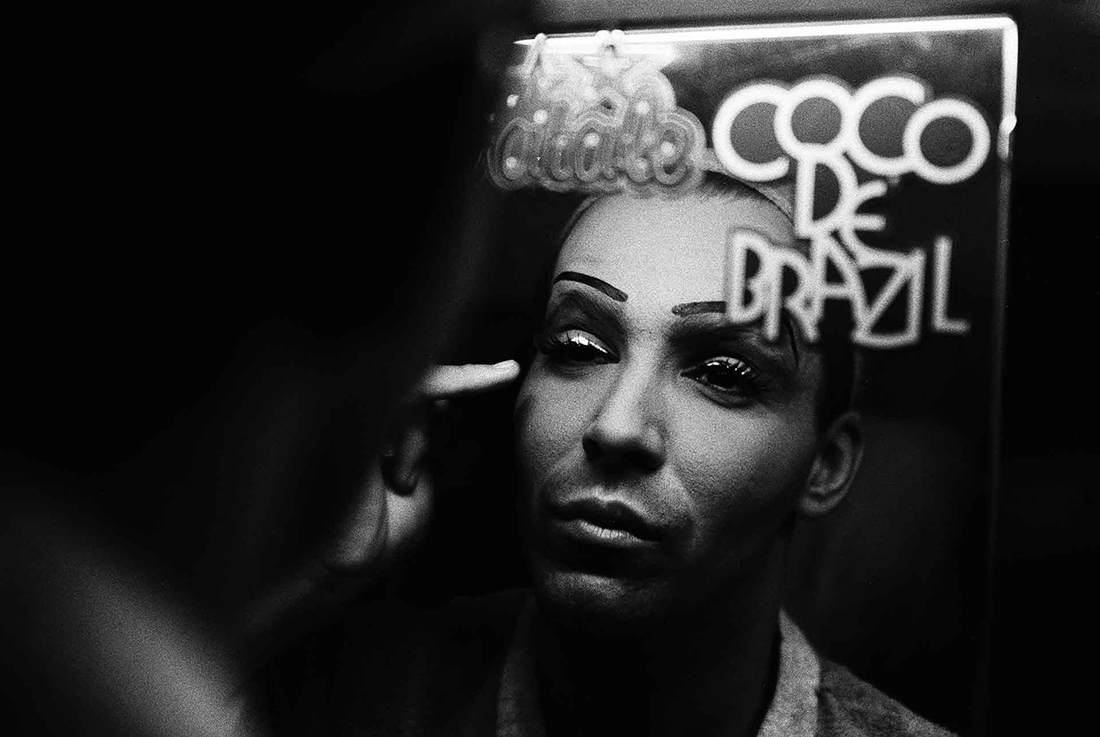 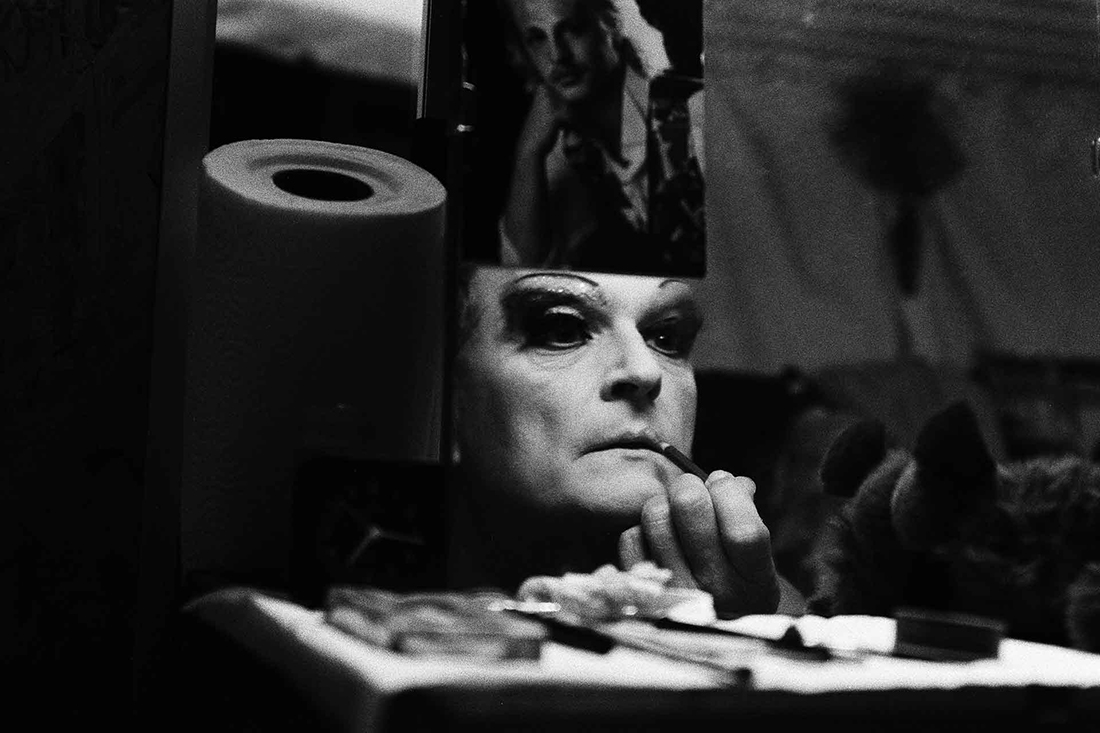 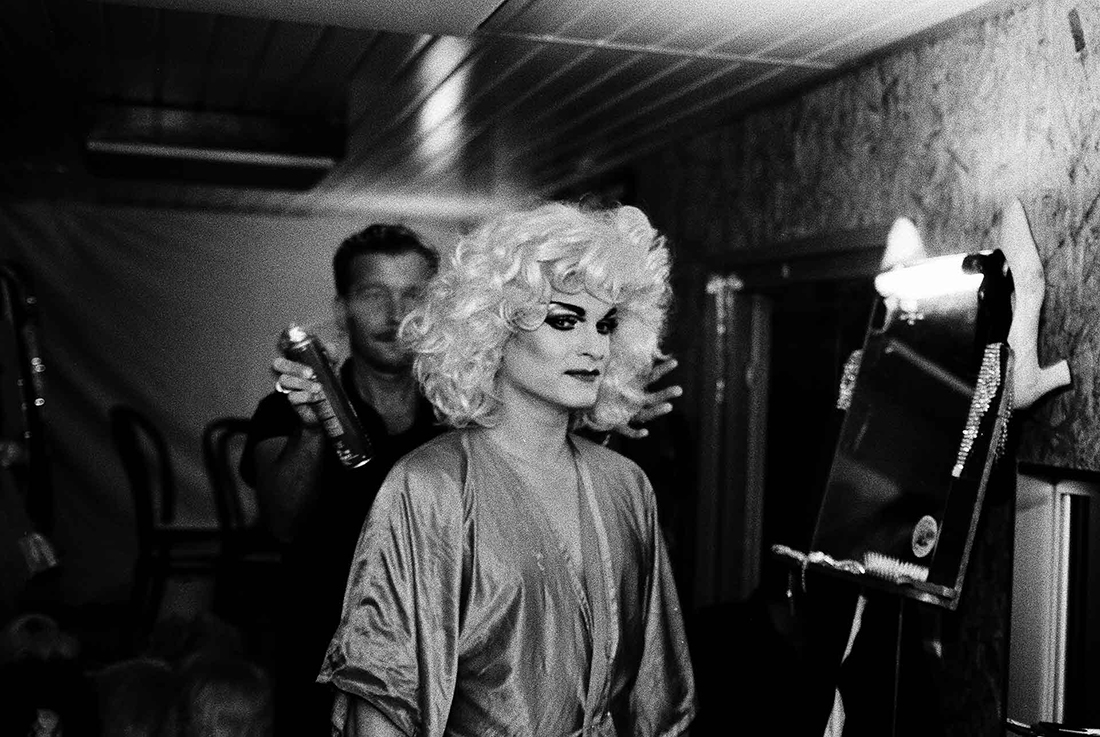 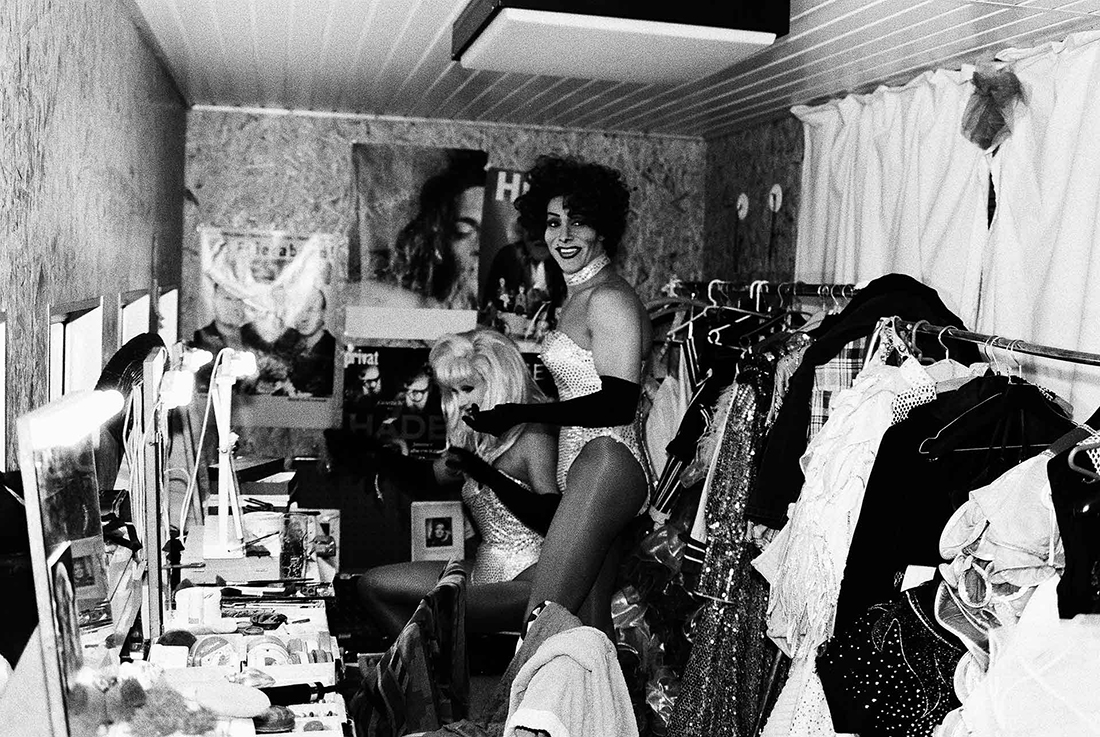 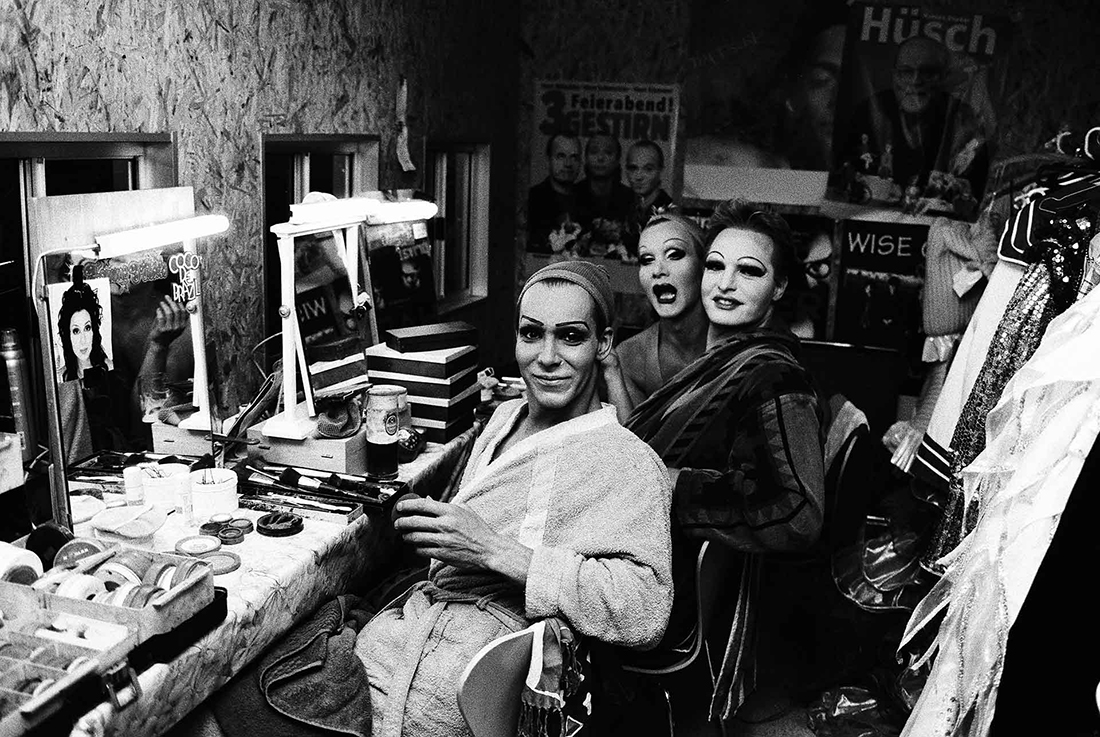 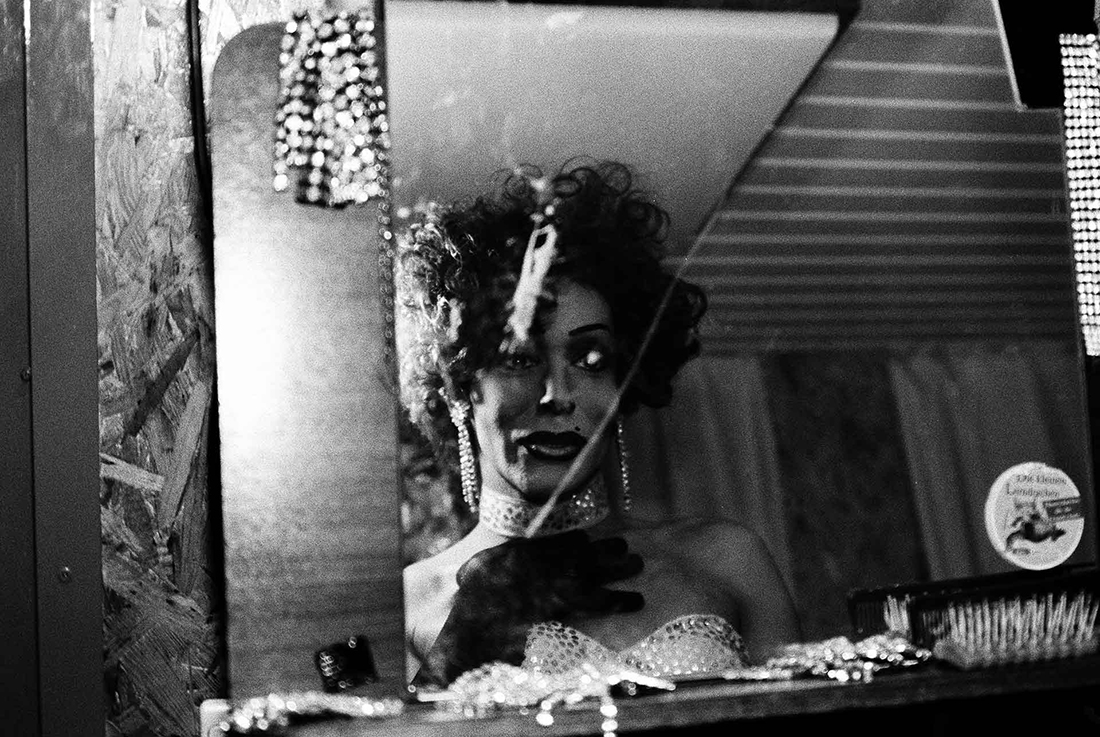 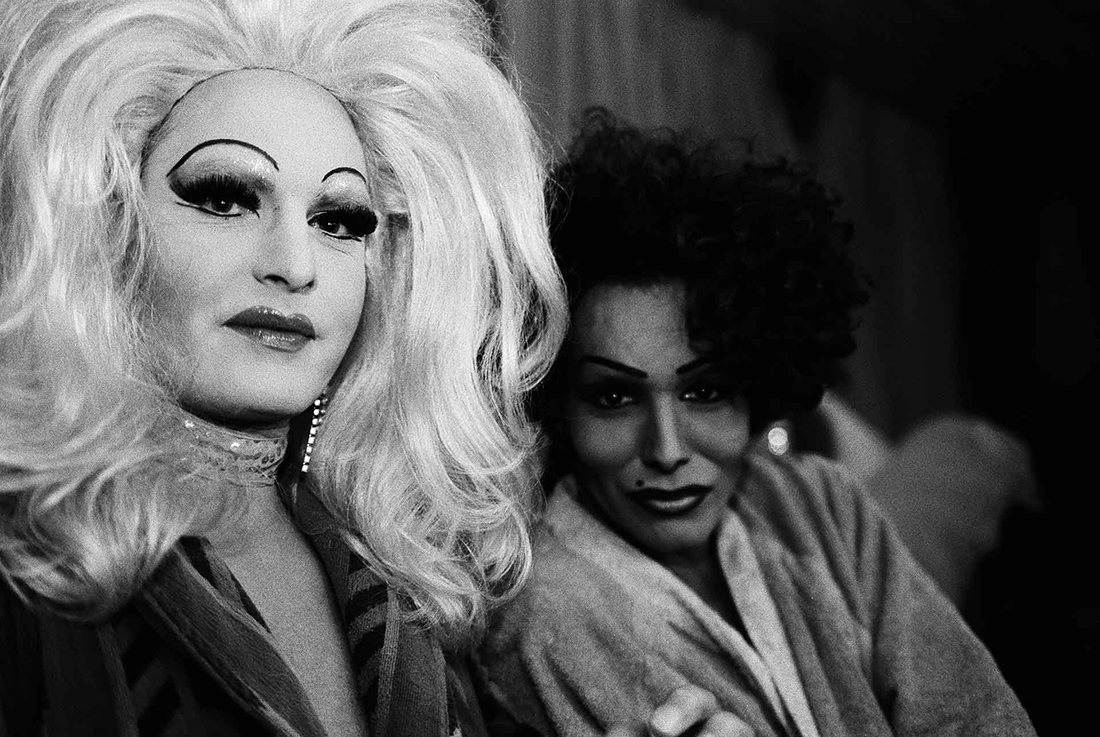 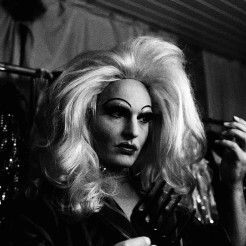 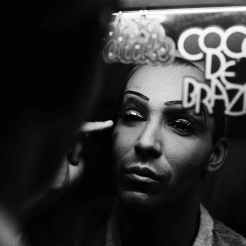 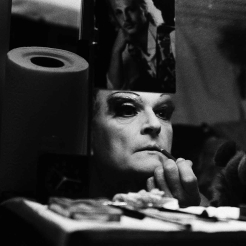 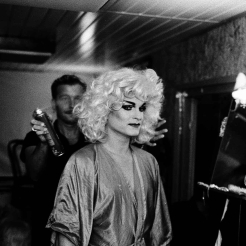 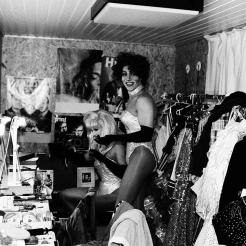 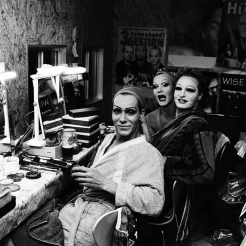 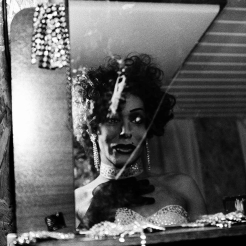 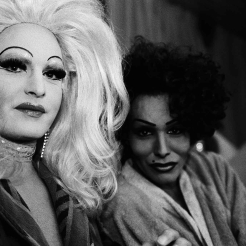 Work series Femme Fatale | 1999
With the establishment of the profession of actress, the (male) travesty changed to the idealization or parodistic exaggeration of the gender role, in which the actors wore clothes of the opposite sex, mostly men in women's clothes.
Travesty is the art of metamorphosis, the artists' repertoire ranges from the imitation of stars to the parody of them, with more or less crude sexual personalities.
The travesty group Femme Fatale was very active and popular, especially in the late 1990s. The series of works was created in 1999 as a committed anniversary photographer for the 40th year of the legendary Senftöpchen Theater in Cologne
In Germany, actors such as Mary & Gordy, Lilo Wanders and Olivia Jones have become very well known (as well-known foreign artists, among many others, Ru Paul, Charles Pierce or Dame Edna should be mentioned).
Two of the most famous travesty roles are the character of Zaza from the play and the film A Cage Full of Fools and Dr. Frank N. Furter from the musical and film The Rocky Horror (Picture) Show. The Austrian singer and travesty artist Tom Neuwirth in the role of Conchita Wurst achieved widespread attention in 2014 when he won the 59th Eurovision Song Contest.

“As a photographer, over the years, you develop your own (visual) language and view of things. Over time, personal passions crystallize, which can change over time. One of my main topics is the human being in the context of his life relationships and real life. "

My passion for photography began in the 1980s. In the beginning I devoted my interest to b / w photography, portraying friends and family members. Working with the camera was and remains a preferred means of expression for me to this day.

A formative background for my later interest in the exploration of social phenomena was the six-month labor dispute between steel workers at Krupp Stahlwerk Rheinhausen in 1987/1988.
The events in Rheinhausen sensitized my view of social realities and polarities in every respect. The then works council, Helmut Laakmann, rose to become the leader of the steel workers after his speech of the uprising and the KRUPP boss and today's multi-member Gerhard Cromme was pelted with eggs by angry steel workers in front of the factory gate.

During my studies abroad at Manchester Metropolitan University with Sue Lawson and Ondre Nowakowski in the mid-1990s, my first solo exhibition was created in the spirit of socially committed street photography.

The photojournalist phase began towards the end of the 1990s, initially for daily newspapers, agencies and television. My dream of accompanying major global events as a sports photographer became a reality in the early 2000s. Since the cycling boom created by Jan Ullrich and Lance Armstrong, I have been accompanying the Tour de France every year. The fascinating sporting mega-event is a French cultural asset and a scandal producer at the same time.

I worked for several years as a sports photographer and Photojournalist as a freelancer for agencies in daily and nationwide reporting.

For years, I pursued my own subjects and topics during my assignment-related stays abroad, from which numerous series have emerged. Documentary photography about young street footballers in the socially disadvantaged areas of major European cities, such as Toxteth (Liverpool), Moss Side and Salford (Manchester), Kallisté (Marseille) or Molenbeek (Belgium) brought the connection to the public art and gallery space. Some topics have become long-term projects.

As a chronicler of the international jazz and free music scene from the end of the 1990s to the mid-2010s, numerous documentary stages and studio portraits were created. From 2006 to 2011 as a festival photographer for the moers festival, the NOZART festival and the Leverkusener Jazztage.


Other long-term projects are portrait series of social groups.
Deadheads in San Francisco, snowboarders at Tegernsee, German fans in Salvador de Bahia, hippies in Brazil, the kitchen staff of the Esalen Institute, or the ZEBRA fans of MSV Duisburg and others.
For a period of 10 years I was a member of an art gallery in Cologne. In this project, the initiator PARZIVAL brought together 100 artists in a large art project and gallery format, including artists such as Gunter Demnig.