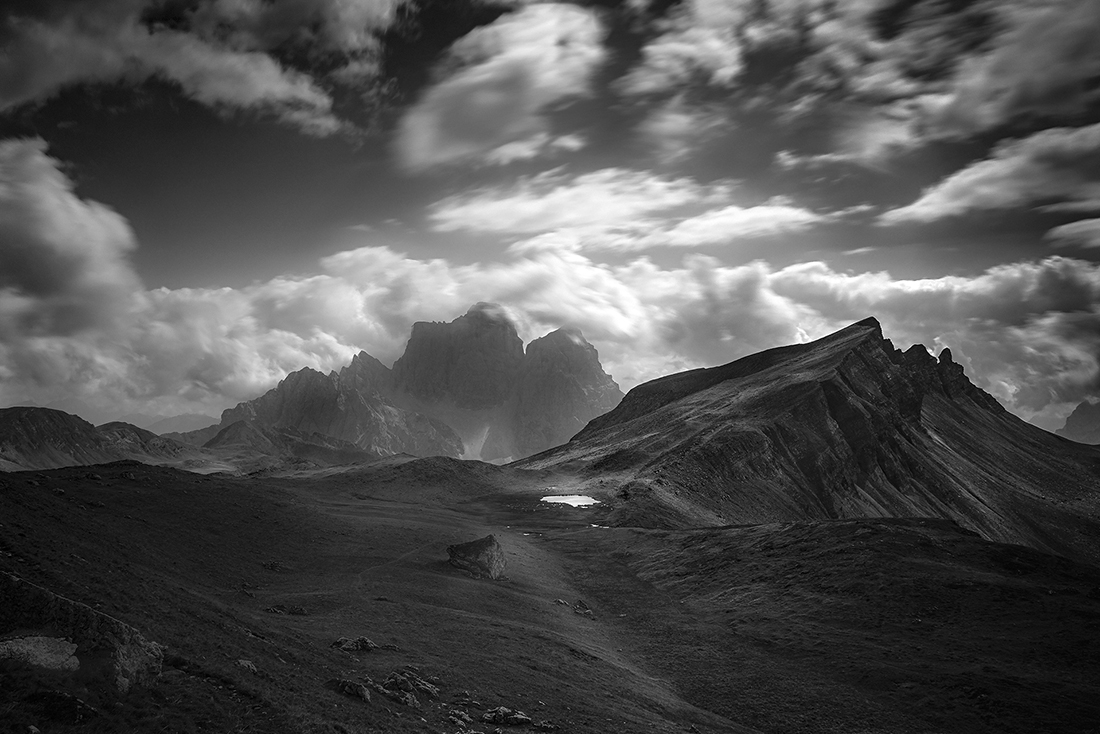 Deep in the heart of the Dolomites, there's an awesome place called Mondeval. Right in the middle a litte lake called Lago delle Baste seems to appear out of nowhere

Beauty all around, clouds running away from the top of Mount Pelmo.
Silence everywhere.

A photographer, writer and communicator by trade, and a composer and pianist by avocation, Alberto Bregani (1962) is one of Italy’s most natural and compelling black-and-white landscape and mountain professional photographers. Born into an artistic family, Alberto grew up in Cortina d’Ampezzo, in the heart of the Dolomites, a UNESCO World Heritage Site.

An academic member of the prestigious Italian Mountain Writers Group (GISM), an Academy of Mountain Art and Culture, Alberto has a huge following both on and offline thanks to his conferences, seminars, workshops and masterclasses. His second book “La montagna in chiaroscuro.” (A short essay about mountain photography - 2017 Ediciclo Editore), has remained for long time on Amazon’s bestseller list in the “travel/mountain” section.

His third book, “Non Solo Sassi" (The stories behind my photographs) is due for release end 2020. Official Sigma Ambassador since 2016, Alberto Bregani divides his time between Milan, the Dolomites and Paris, where he has been living since the end of 2018.
_________
"Mountains and photography involve walking, letting your eyes guide you, improvising, discovering, moving from place to place, and seeing familiar ones in a new light. Just one camera, one lens, a tripod and handful of black-and-white rolls your only companions. It means wandering in and out of the forest, over and around the mountains, aimlessly and timelessly, following the path of the sun, clouds drifting in and out of sight, casting light and shadow on the snow and on the rock. Each shot is full of silence and soulfulness. It is as though I am in the mountains and in the photograph at the same time. And this, for now, is all I need." (Alberto Bregani)
Share
Support this photographer - share this work on Facebook.
< BACK TO GALLERY