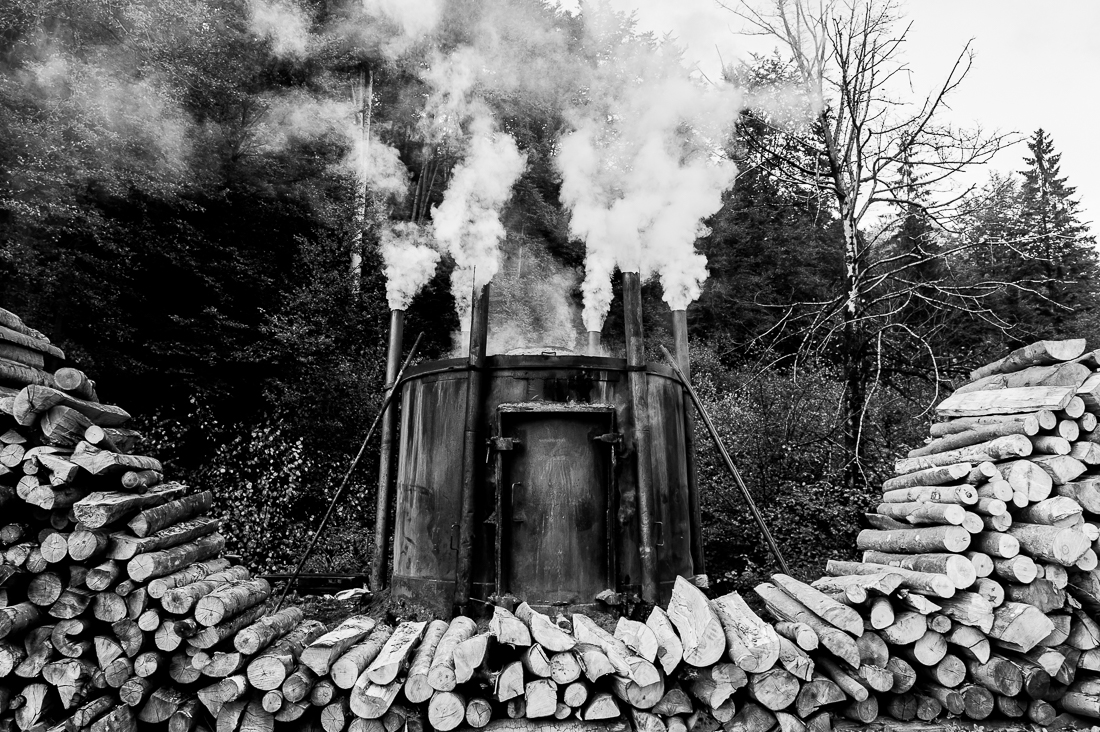 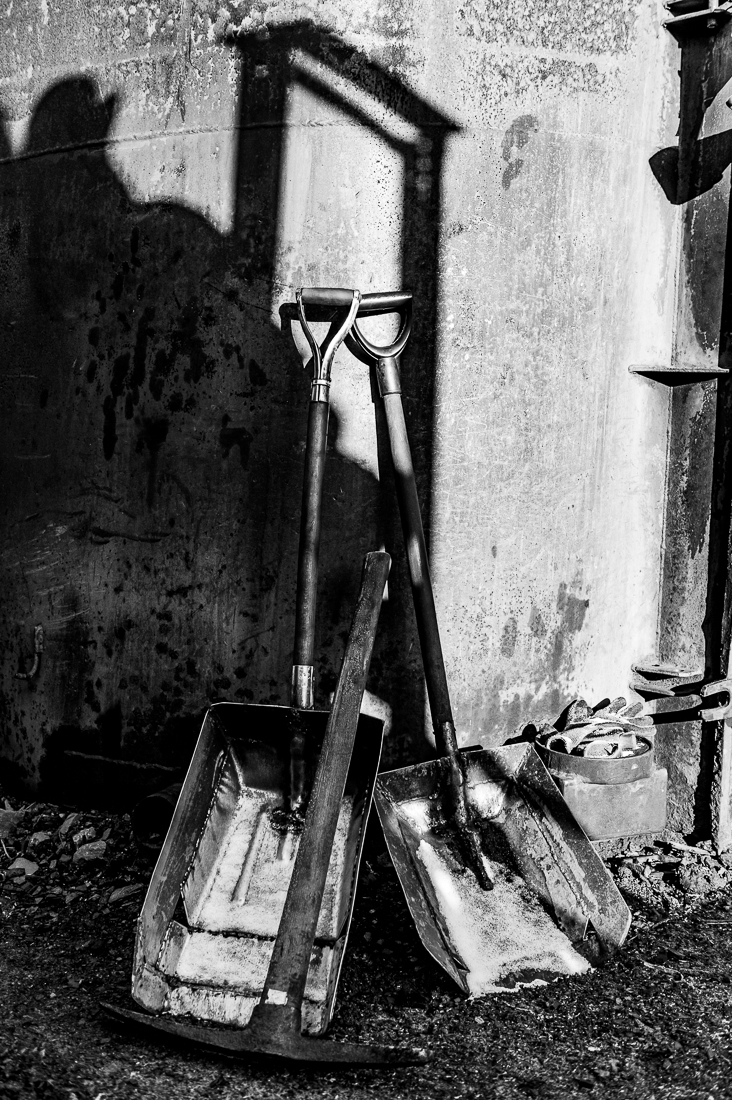 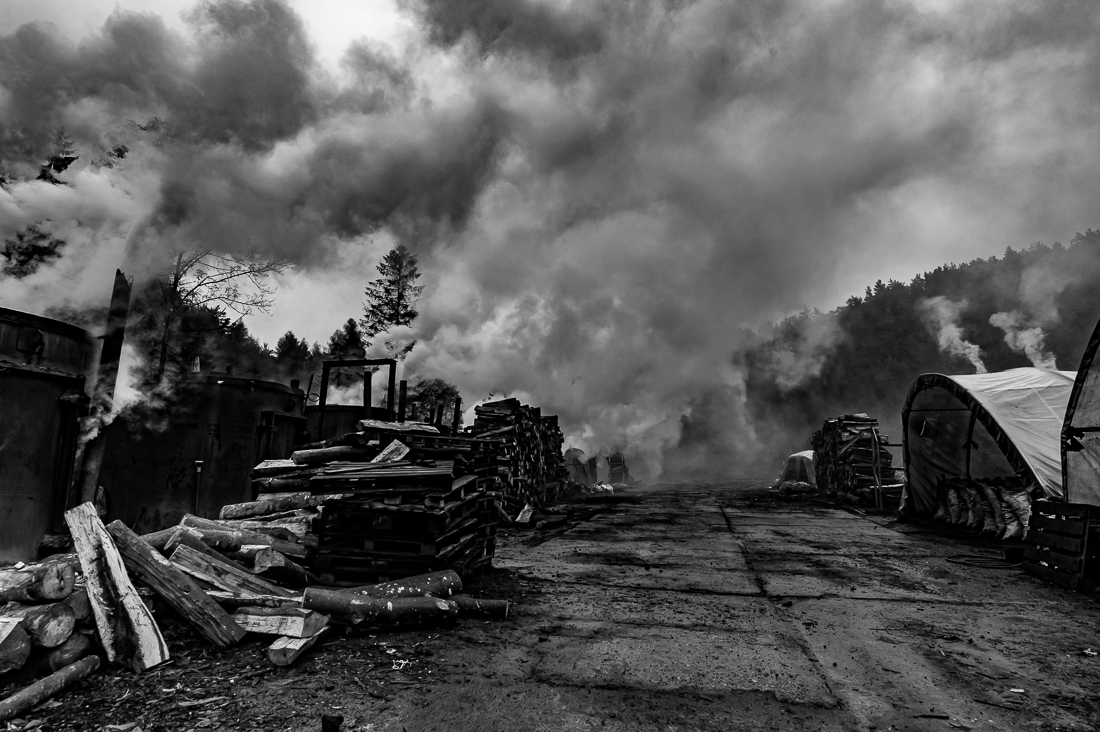 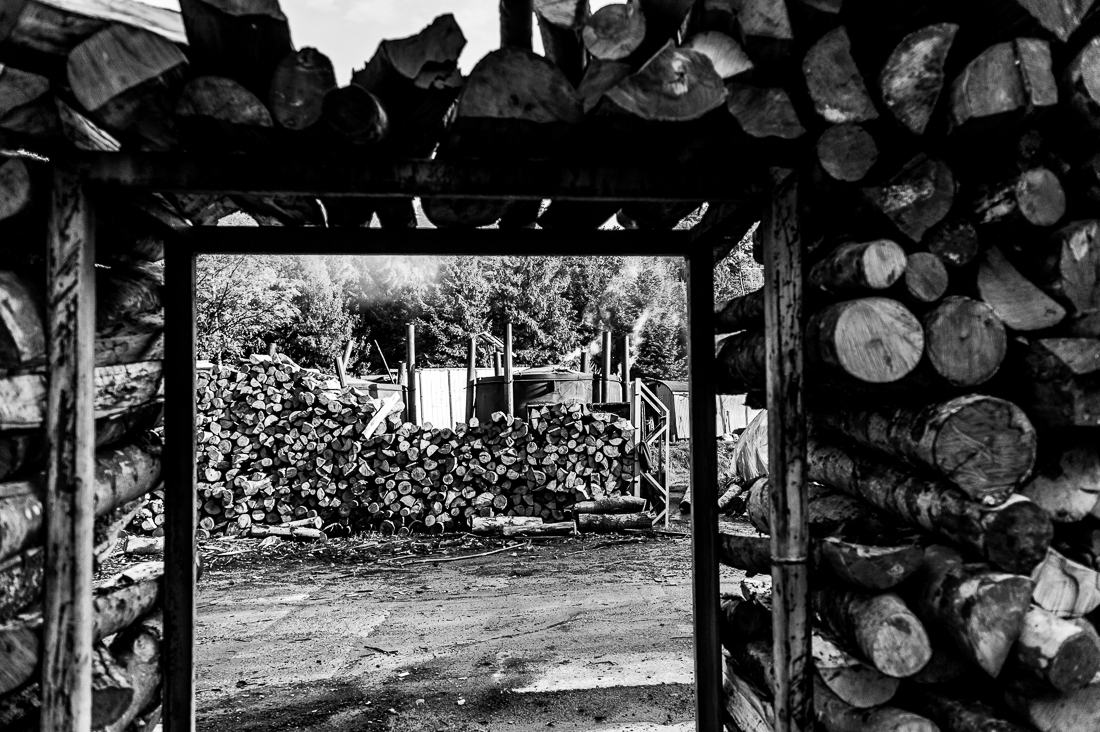 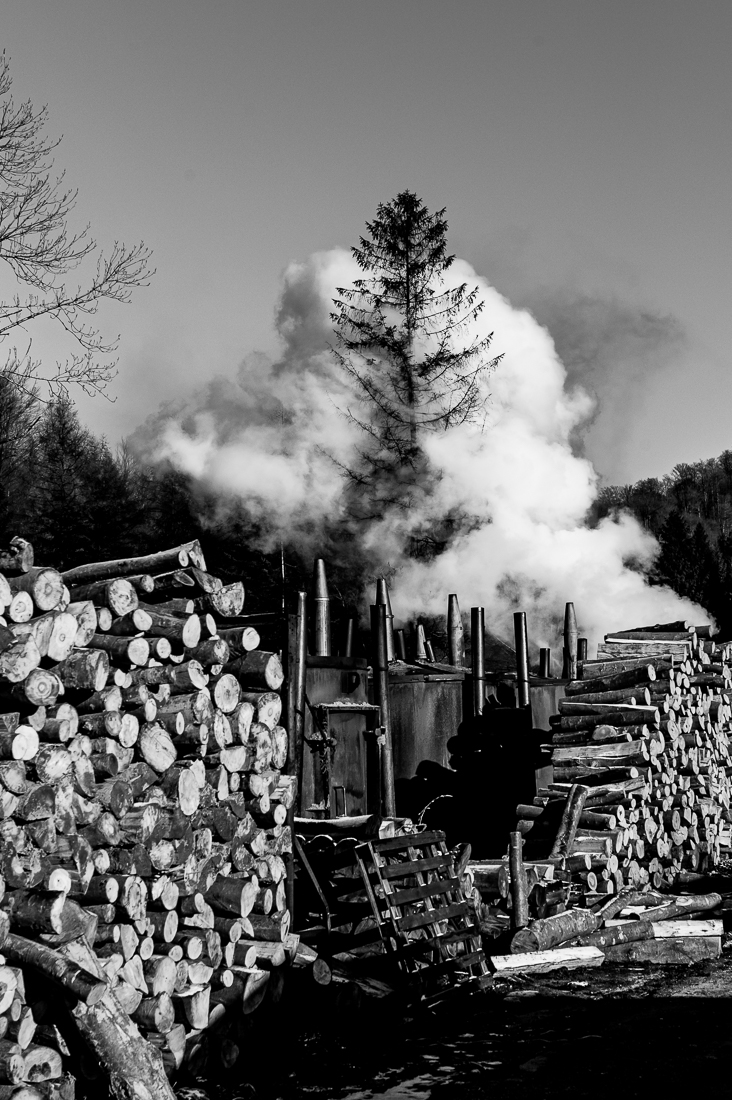 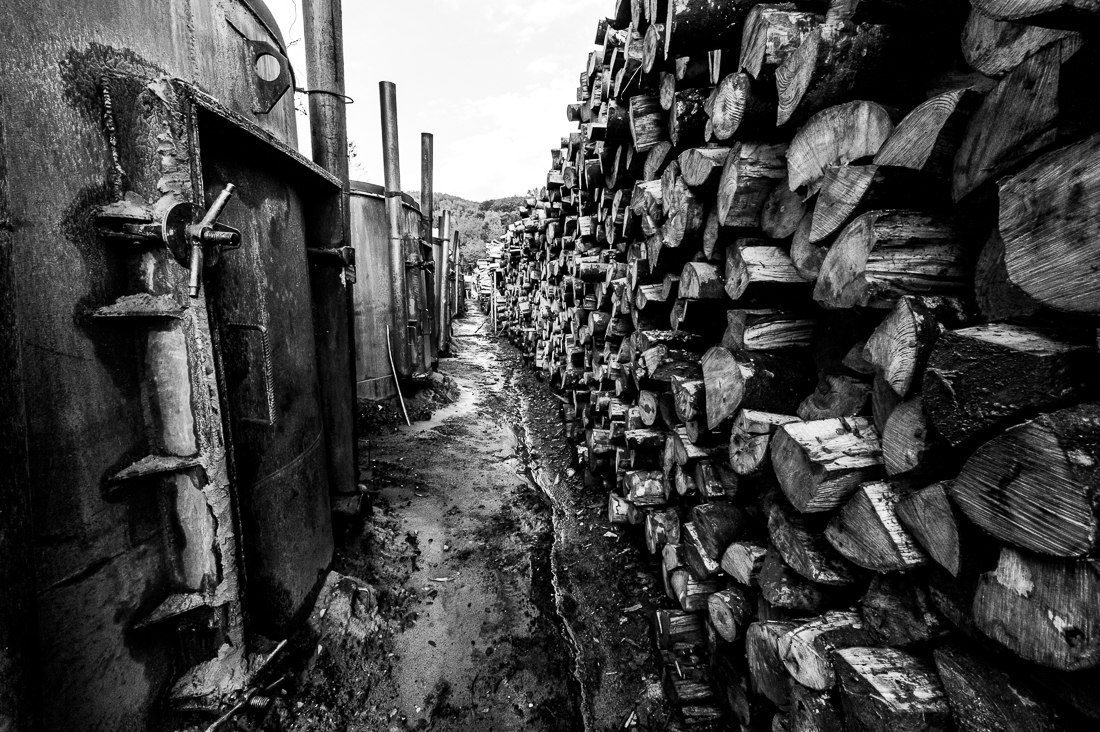 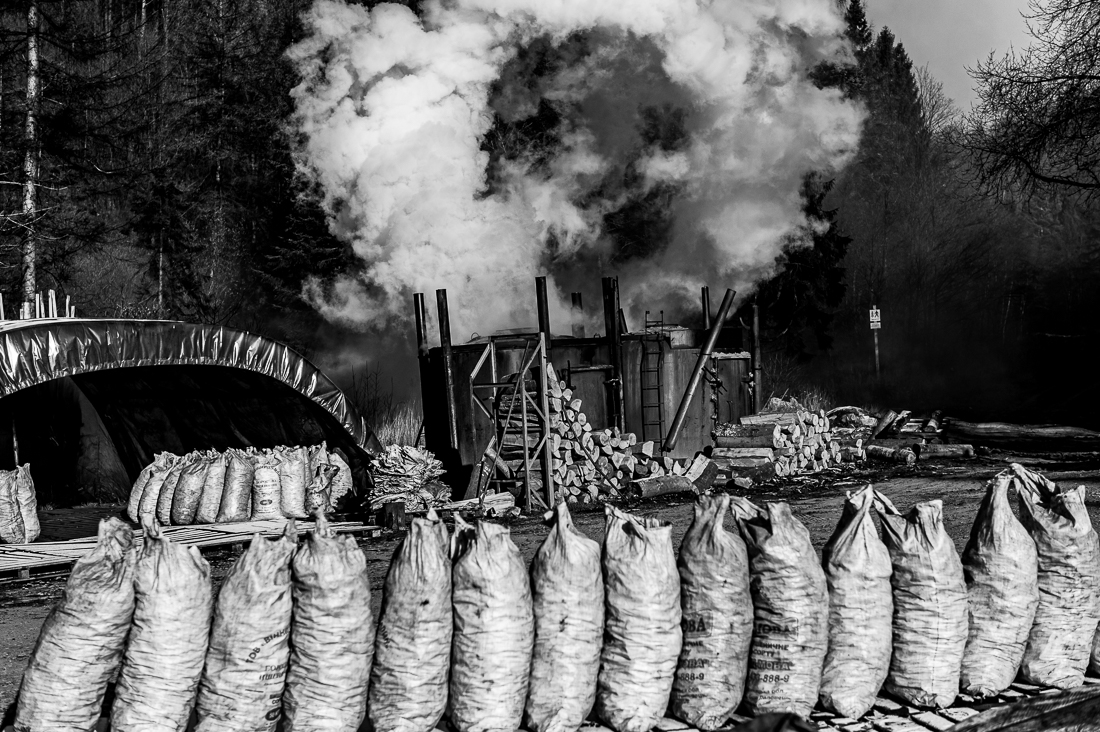 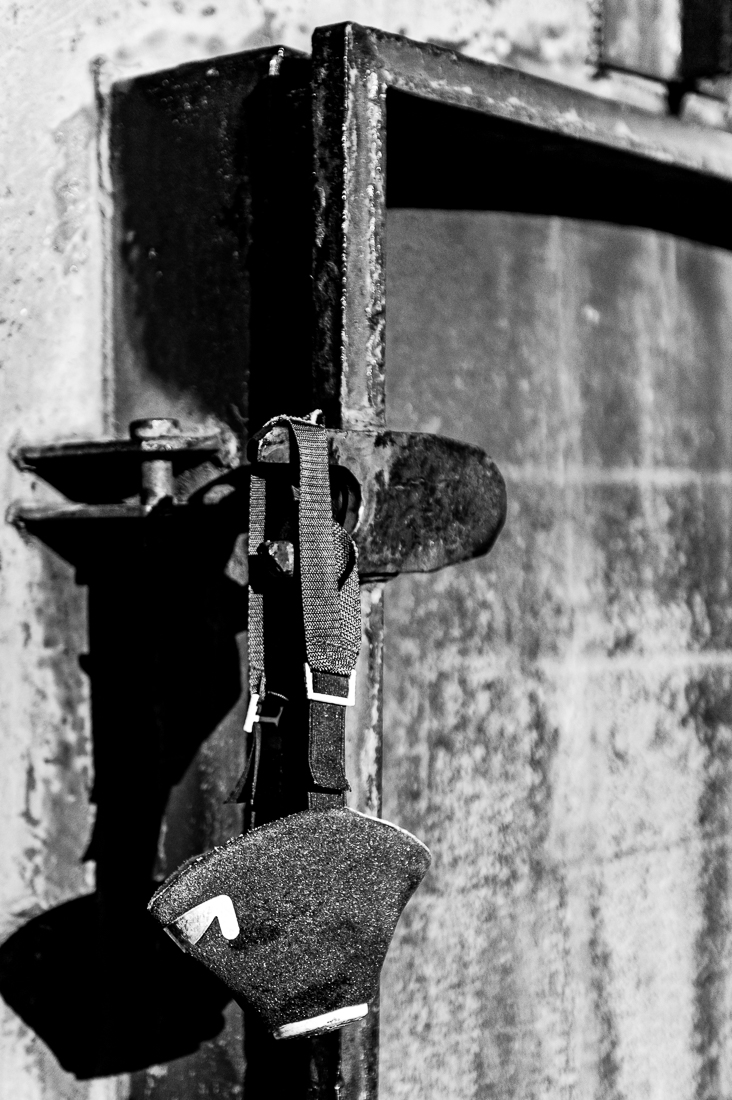 The Burning.The integral part of the landscape in Bieszczady (a mountain range in south-eastern part of Poland) is a smoke, coming from Charcoal burning sides.Till the beginning of the 80s of the XXth century, charcoal has been burnt in cone-shaped piles, built of leafy trees’ logs mixed up with turf and clay, measuring up to 230 metres in diameter.Then, the era of retorts has began – These are cylindric furnaces, made of 12 milimetres thick tinware and over 2,5 meters high.One retort can contain 13 cubic meters of wood, which then can be burnt to produce 1,5 tonnes of charcoal.Most of the time, wood of leafy trees is used for production (Trees such as Beech, Hornbeam, Fraxinus). Today, of about 500 burning sides known at the beginning of the year 2000, only 10 are still operational.The result of decline in demand for Charcoal from Bieszczady and lack of people eager to take the job.The work of Charcoal Burner is hard, dirty and not well-paid.Charcoal Burners, as the men in the profession are called, are usually people, who could not find themselves in other jobs and ‘normal lives’.The pungent smoke and coal dust are present everywhere.It’s hard to talk about ecology in such working conditions, as the byproducts of charcoal burning are wood gas - whose ingredients include carbon oxide, carbon dioxide, methan and hydrogen -, water distillate that contains acetic acid, methanol and acetone, as well as wood tar created by phenols, creosotes, guaiacols and terpenes.And all of this is covered by coal dust which, whenever it’s raining, turns into a tarry grease.Apart from being used as fuel for Grills, Charcoal is also used in metallurgy, medicine, food and chemical industries.

Robert Bogusławski – born in Łódź in 1975. Studied the philosophy at the University of Lódź. The winner of Wold Press Photo 2003 - second place in Sport Stories category. Member of International Sports Press Associacion.
SHARE
Support this photographer - share this work on Facebook.
< BACK TO GALLERY