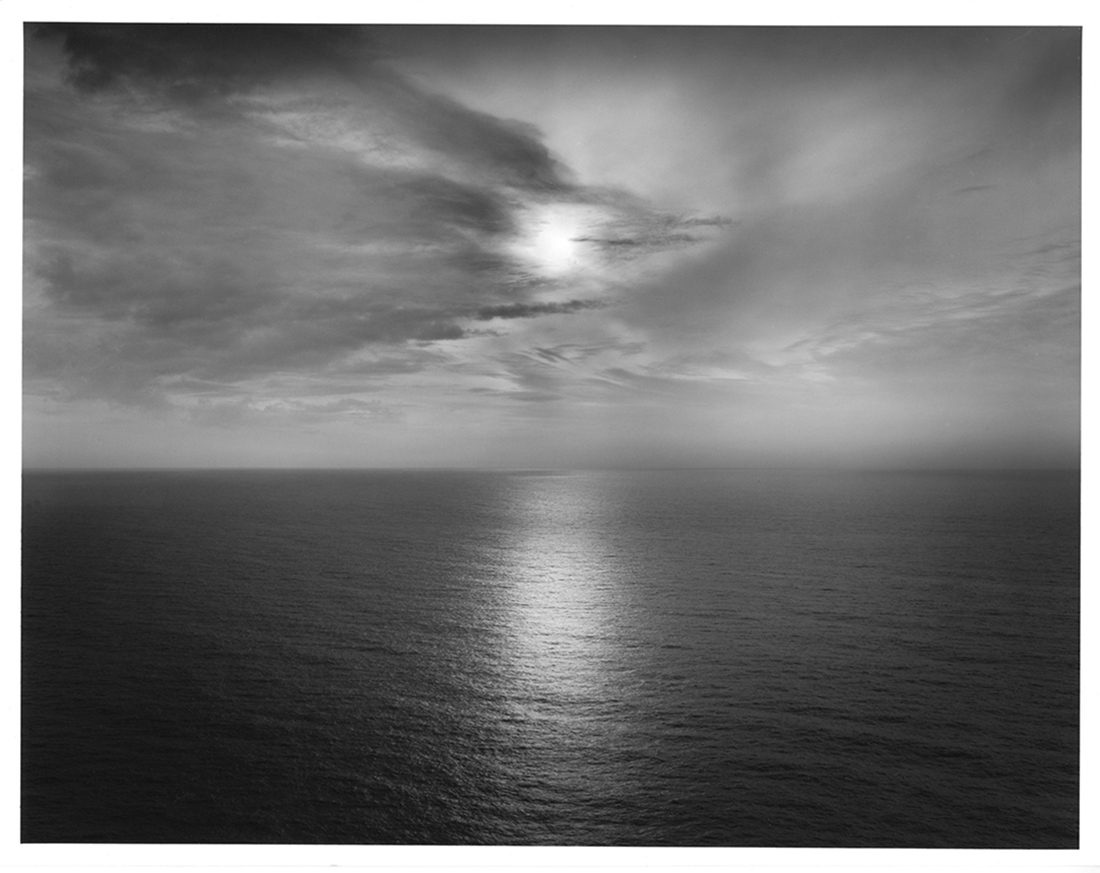 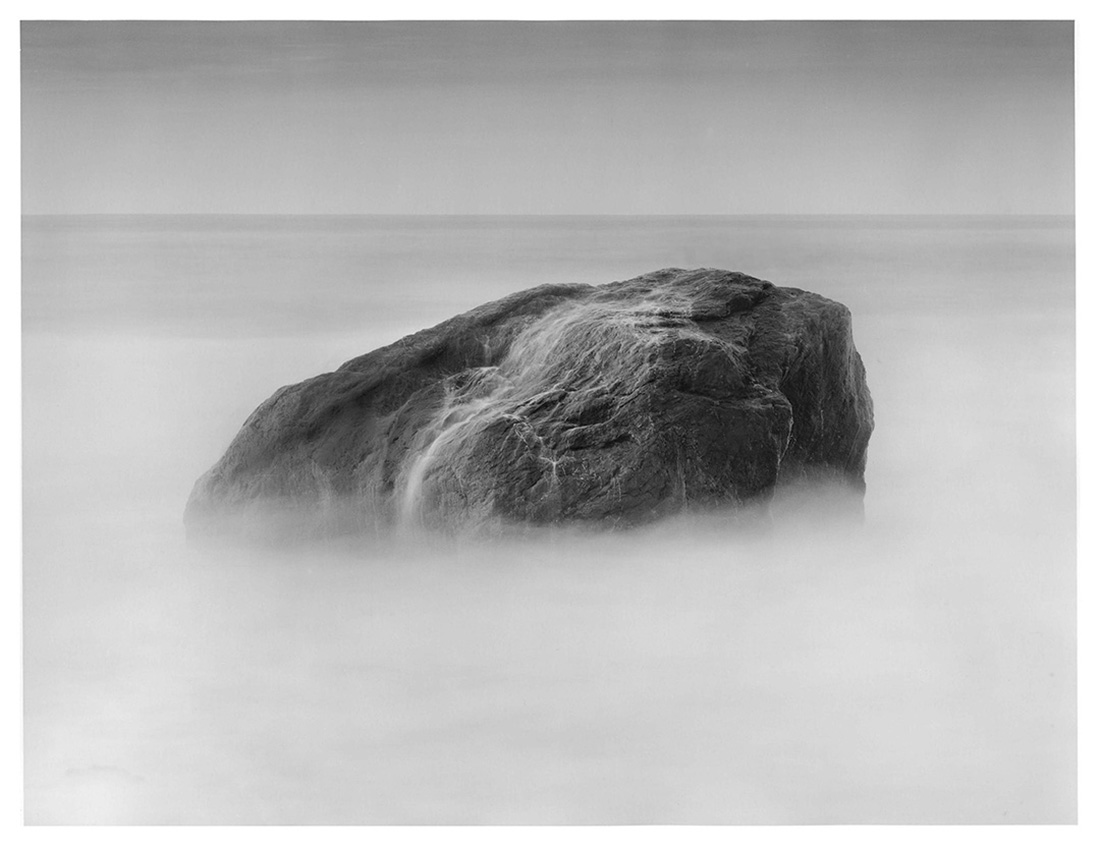 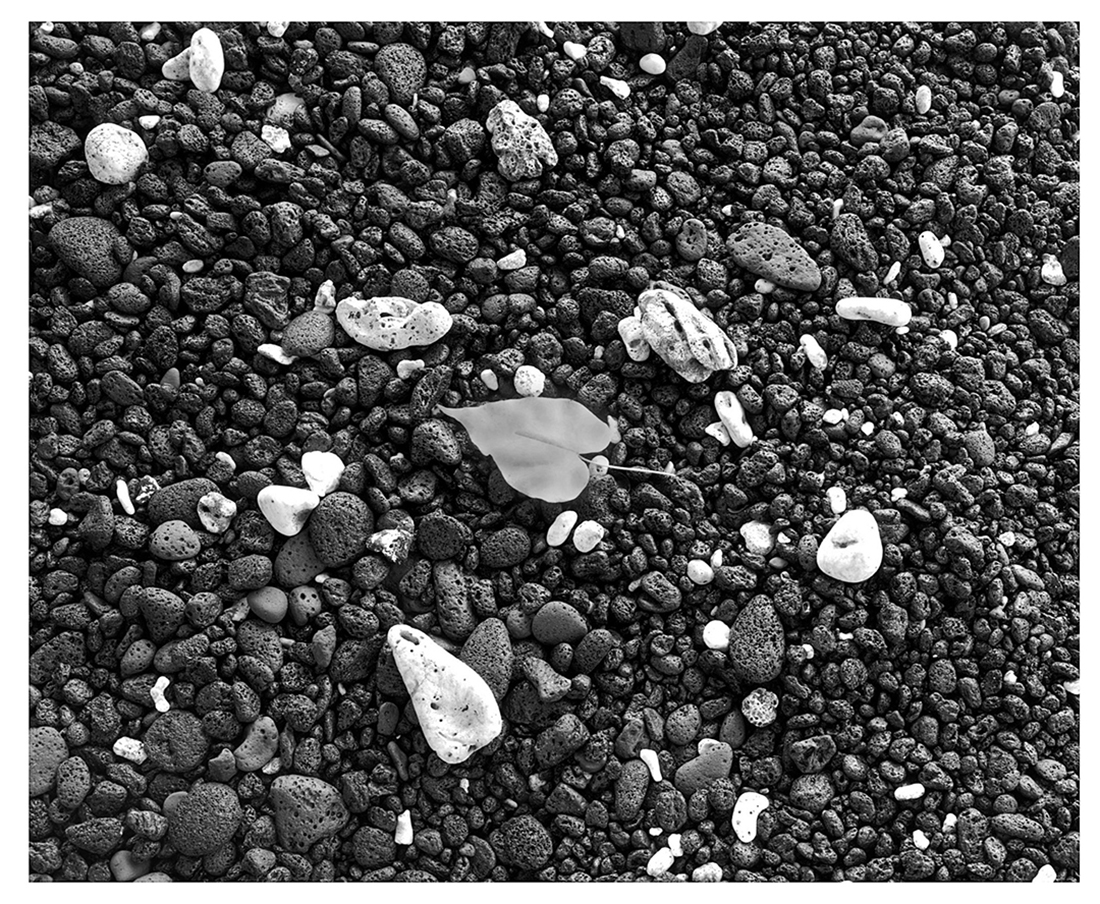 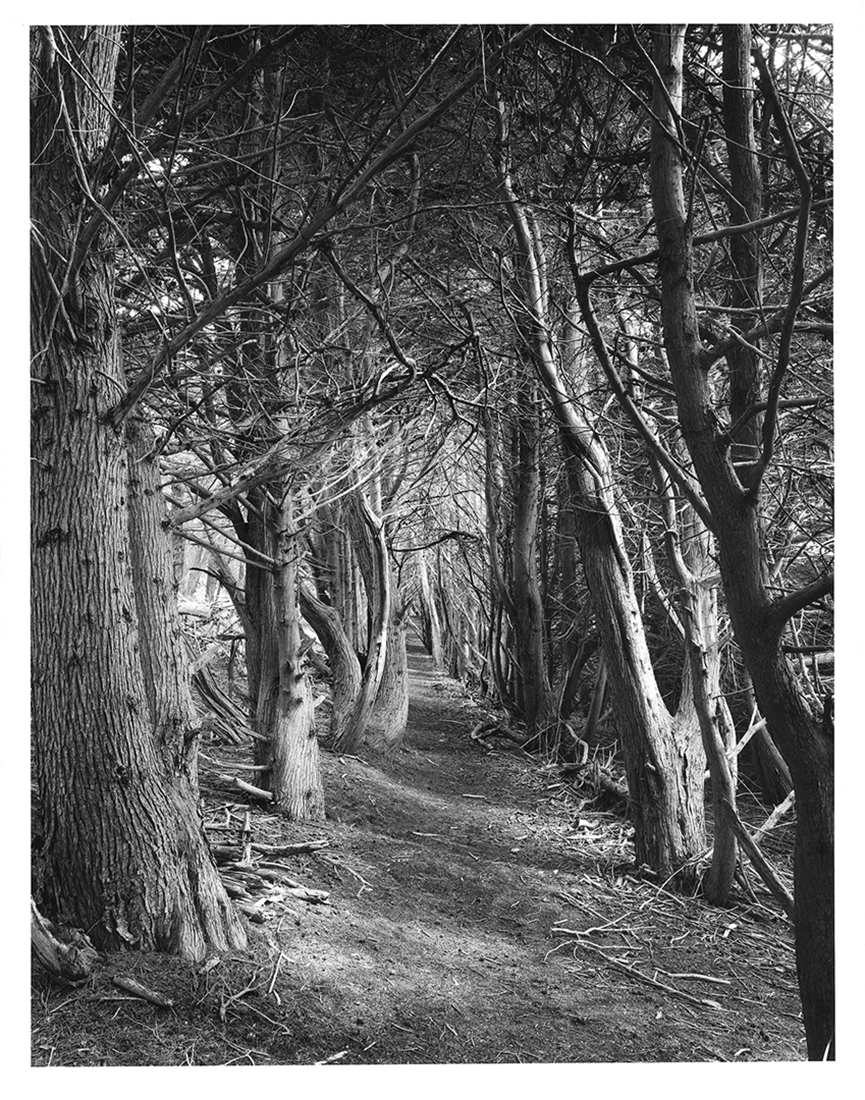 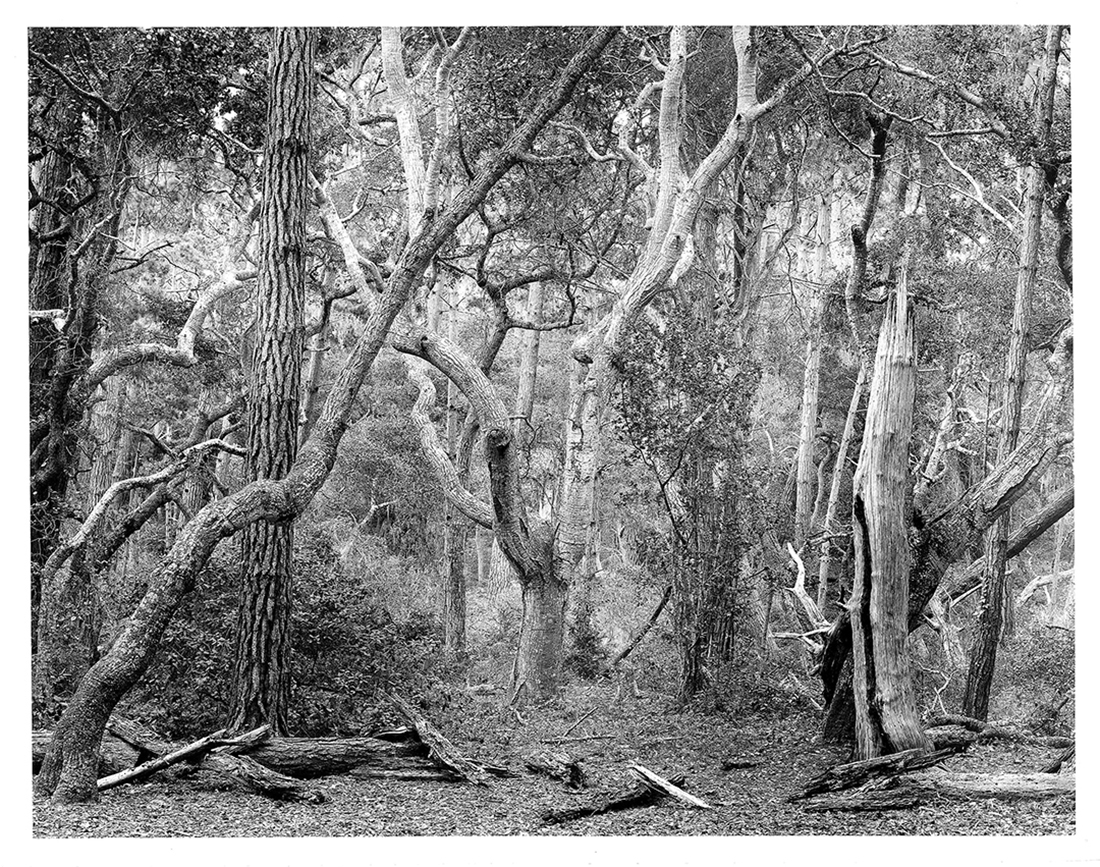 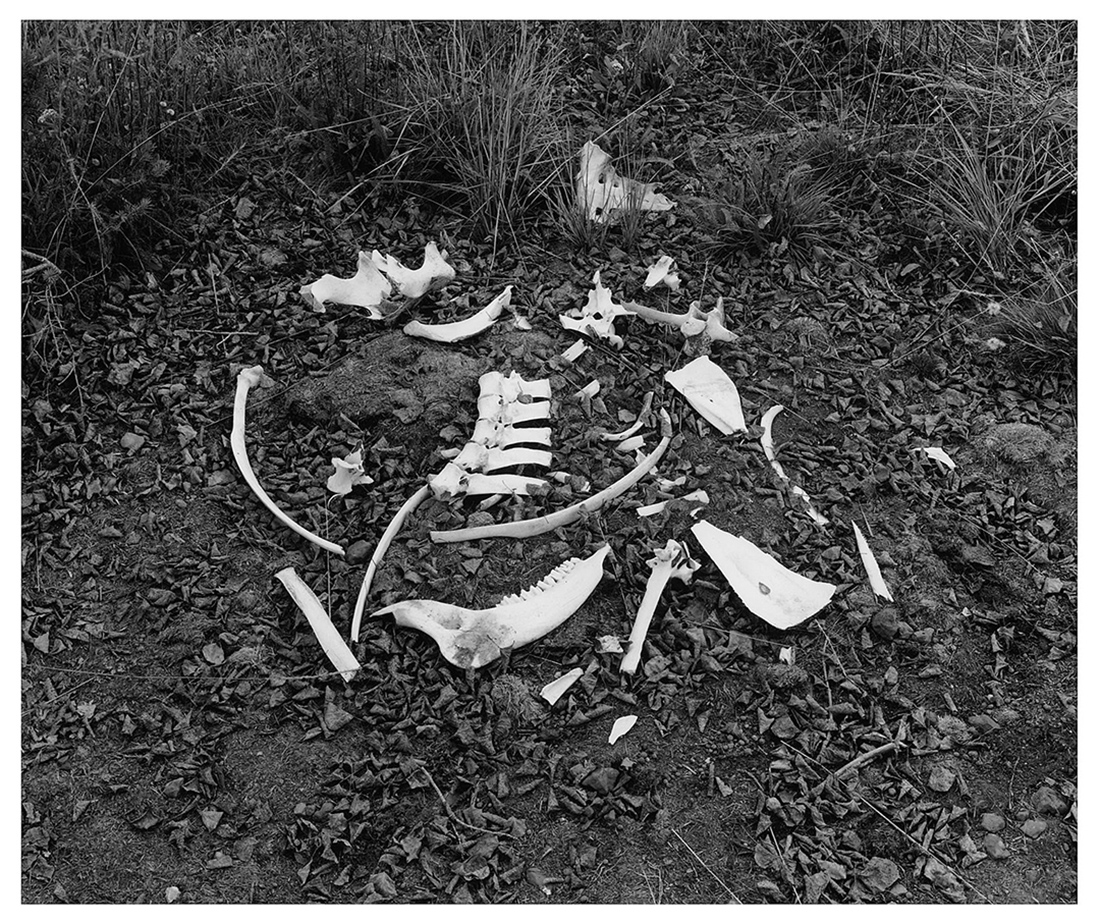 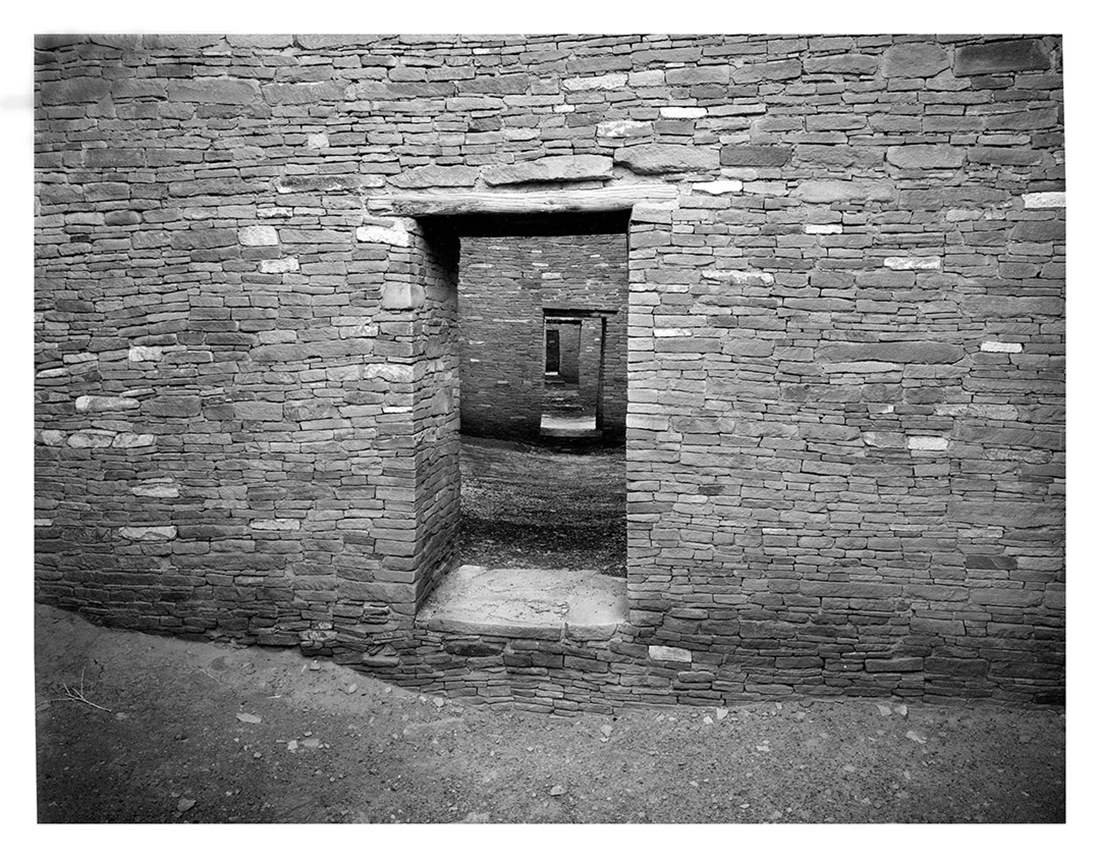 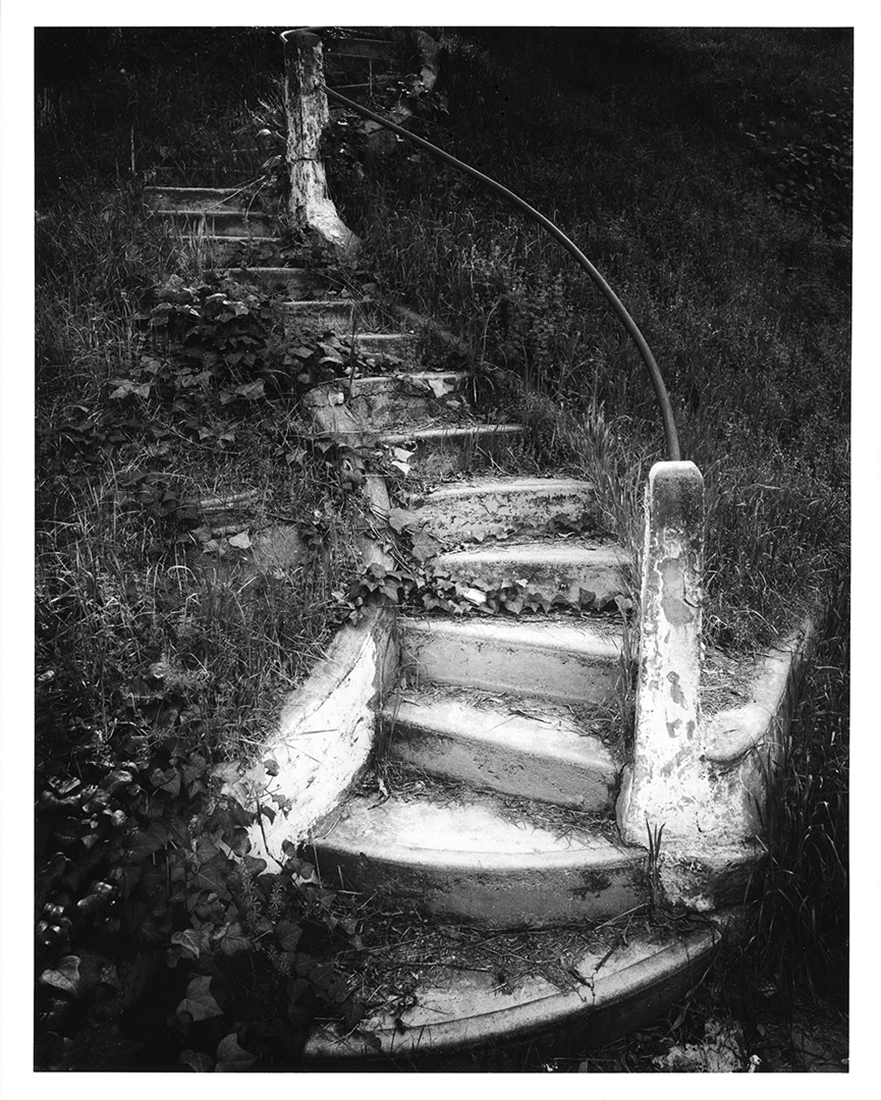 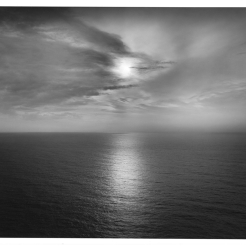 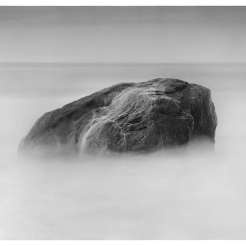 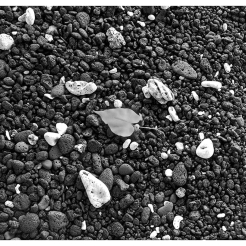 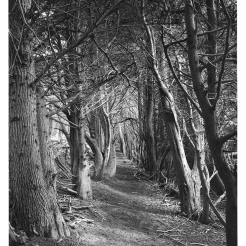 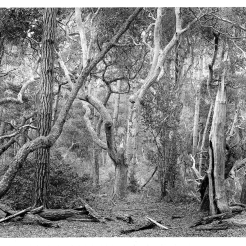 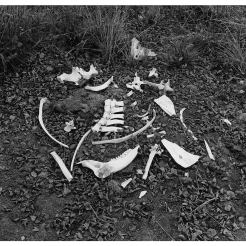 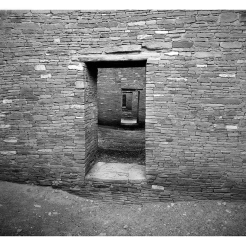 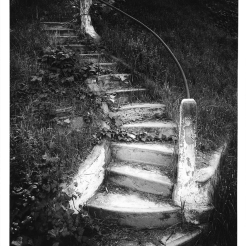 The respect a work of art inspires is a potent argument for the existence of an art instinct in all humans. The Lascaux Caves, Stonehenge monoliths, aboriginal proverbs, sagas and songs demonstrate that narratives date from the beginnings of human interaction, before written words. In all guises, including Bierstadt, Moran and the West Coast photographers, environments have been portrayed as places of refuge and inspiration, with water, fauna and dynamic illumination.

This is what the pre-literate fables in my own work aspire to communicate: the mystery of our origins, complexity that outstrips logic, mythological transformations and the illusion of physical death. The images invoke that pre-literate sense of place which tells the story of us all. This study will take a lifetime to complete.

I use a Canham MQC57 with 4x5 and 5x7 backs and Wehman 8x10 field camera to record images on Ilford HP5 sheet film. With a Devere 5108, I personally craft each print in real time onto Ilford Multigrade fiber-based Classic black and white paper in the "wet darkroom" process made famous by Ansel Adams, Brett and Edward Weston and Imogen Cunningham. The 24 X 30 and 30 X 40 prints have an archival integrity of over 300 years.

In 2002 Michael Miner began chronicling the chaos, beauty and soul of the landscape in portfolios titled THE FIRST DAY, THOREAU’S CHILDREN, METAMORPHOSES, TREEBONES, CHAOS THEORY, WHERE LAND AND WATER MEET, THE GATELESS GATES AND OTHER ZEN KOANS and THE BILLBOARD PROJECT.

In 2010 and 2014 Mr. Miner accepted Artist-in-Residence Grants from the National Park Service and spent a month at the Grand Canyon’s North and South Rims, as well as the United Nations World Heritage site Chaco Canyon.

In 2010 and 2013, Mr. Miner received MERIT AWARDS from Black and White Magazine. In 2011, 2013 and 2014, the Center for Photographic Art in Carmel, California selected a series of Miner’s images for its Juried Exhibitions, and in 2014 the Santa Barbara Museum of Art acquired one of the GATELESS GATE series for its permanent collection. In May of 2016, Mr. Miner fulfilled an A-i-R grant at the Brush Creek Foundation for the Arts in Eastern Wyoming.

Mr. Miner’s landscape photographs grace many private collections, have received dozens of awards and most recently he began striking prints with dimensions of 4 X 5 feet.

Mr. Miner is also an accomplished screenwriter, cinematographer and teacher. Mr. Miner received a Bachelor of Arts degree in English Literature and Theater, and a Master of Fine Arts degree at the Theater, Film and Television Department of the University of California, Los Angeles. While there he wrote and directed three award-winning films and was also a cinematographer of five student projects.

Mr. Miner's professional career includes time as a director/cameraman of music videos and commercials. As co-writer of ROBOCOP, the action story about the part man/part machine law enforcer of the future, Mr. Miner received the SATURN AWARD for Best Science Fiction Screenplay and a nomination for Best Screenplay by the Mystery Writers of America. Most recently, he directed THE BOOK OF STARS, magic realism about the troubled relationship between two sisters and a memory book that has the power to anticipate future events. Mr. Miner discovered the script while teaching a writing class at the Maine Photographic Workshops.

Mr. Miner has taught screenwriting at the Maine Photographic Workshops, the Praxis Center for Screenwriting, the University of California at Santa Barbara and California State University at Los Angeles.
For the last eight years, working for the non-profit INSIDEOUT WRITERS, Mr. Miner has taught self-expression to incarcerated juveniles in the Central Juvenile Hall in Los Angeles.