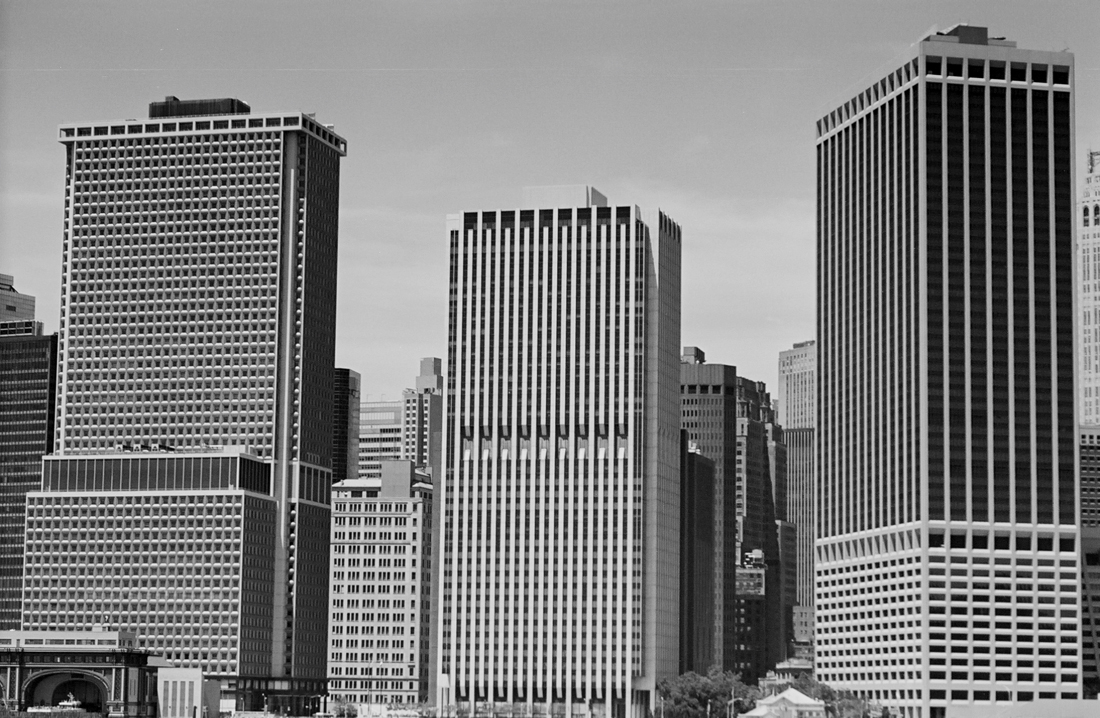 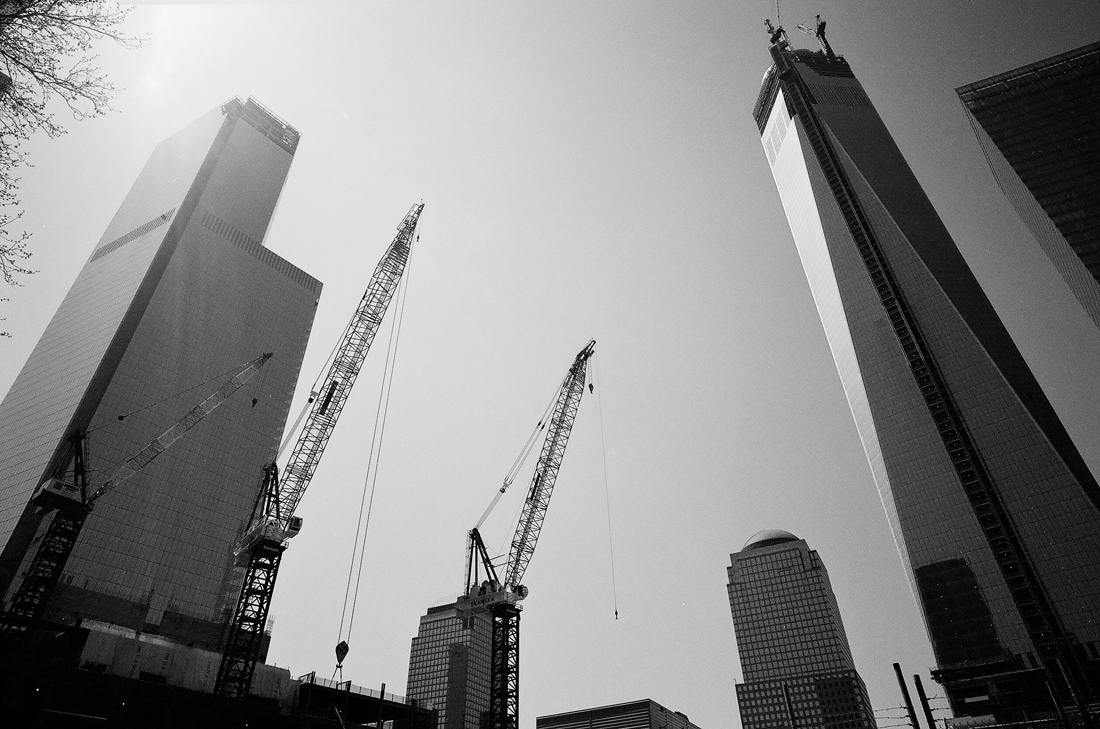 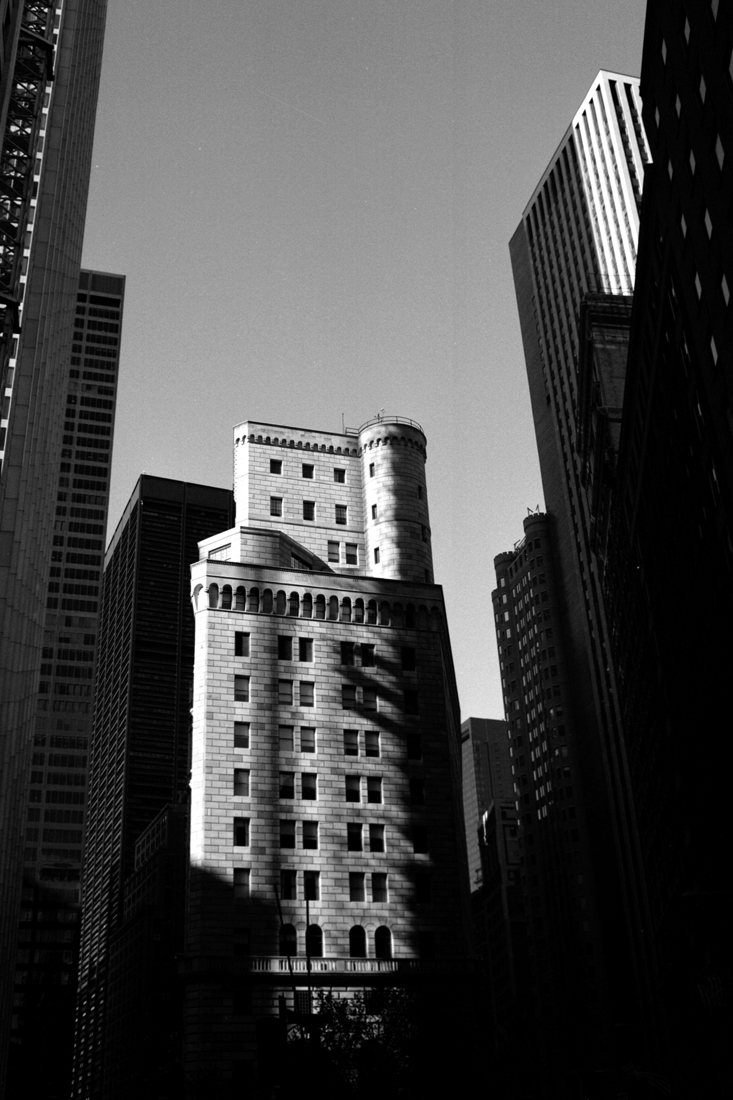 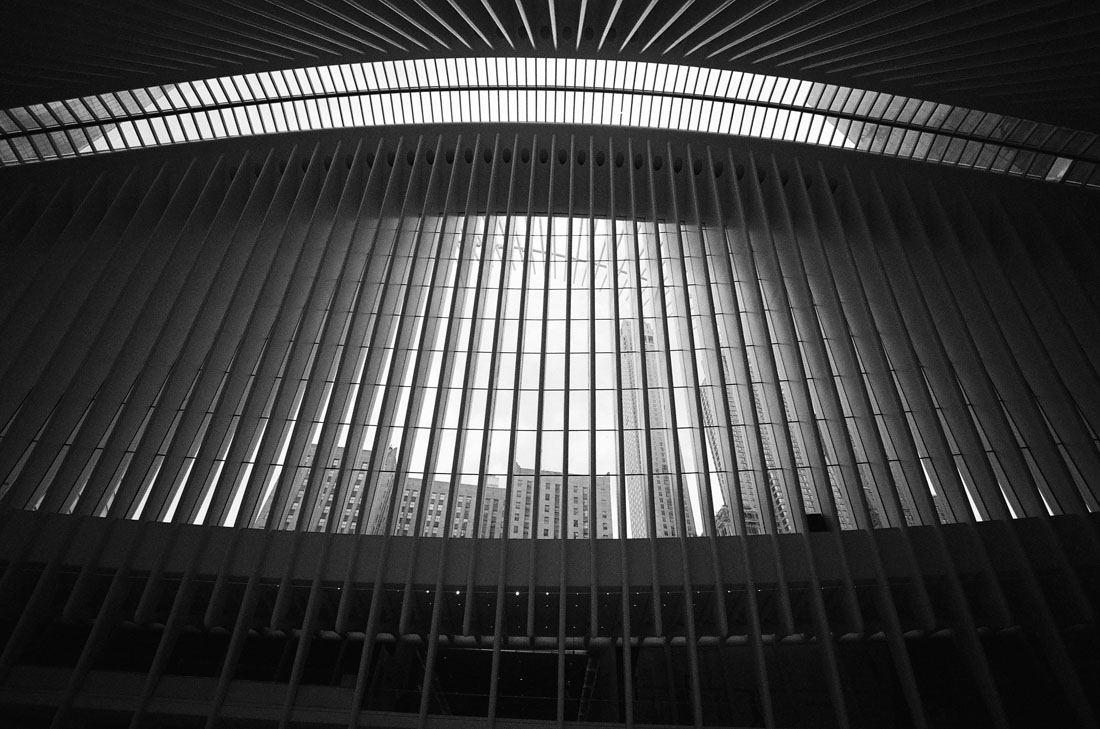 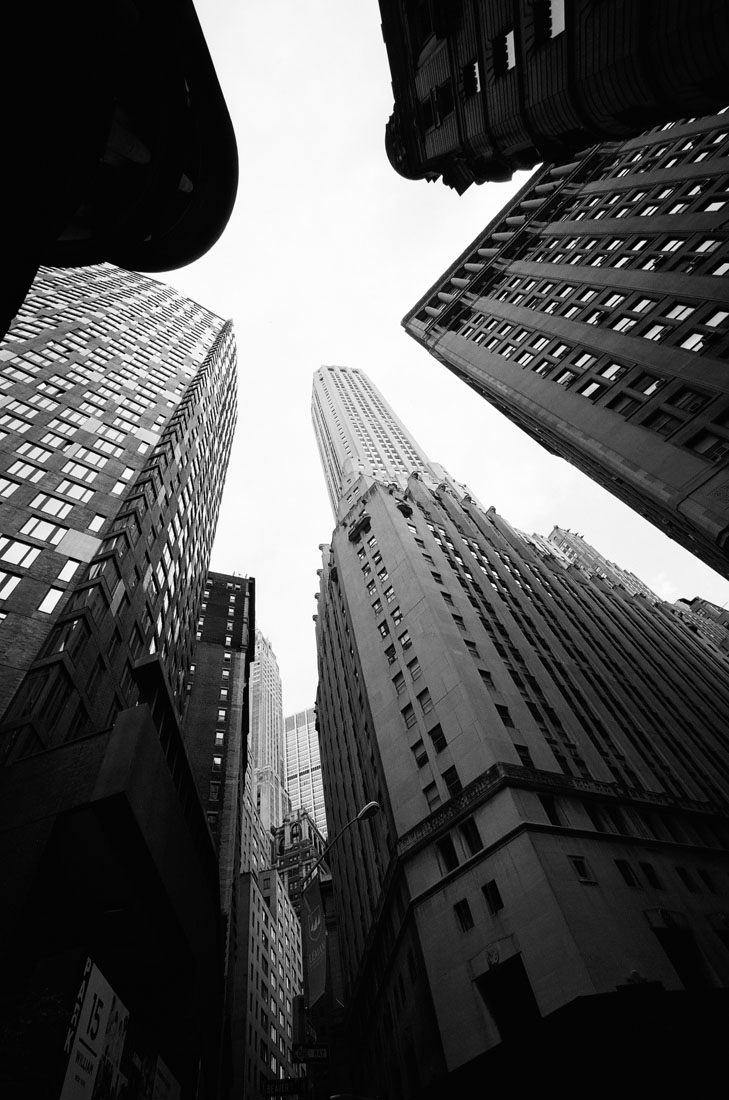 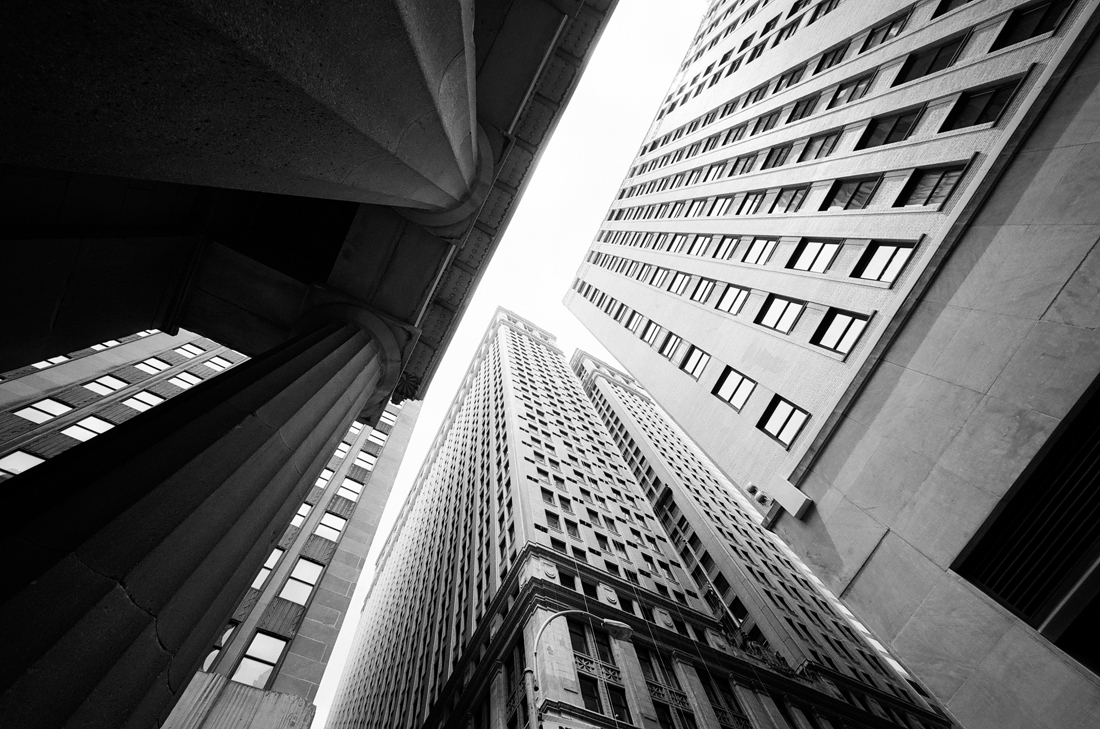 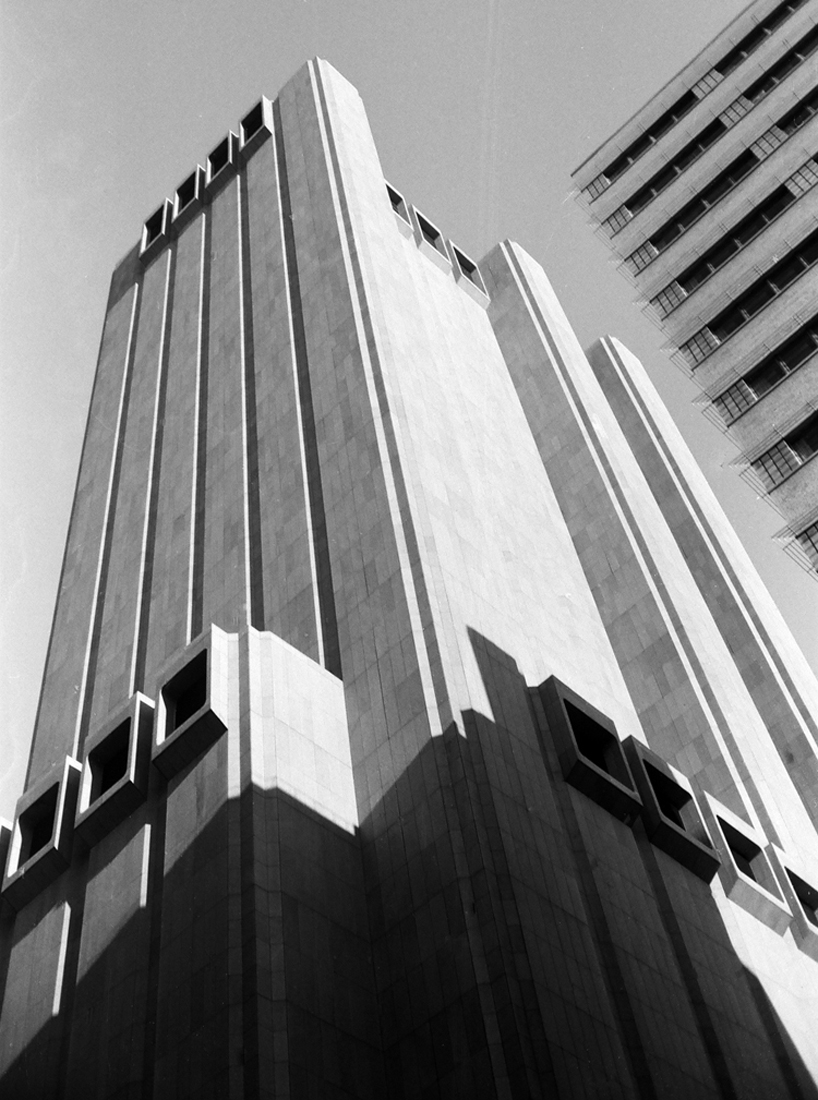 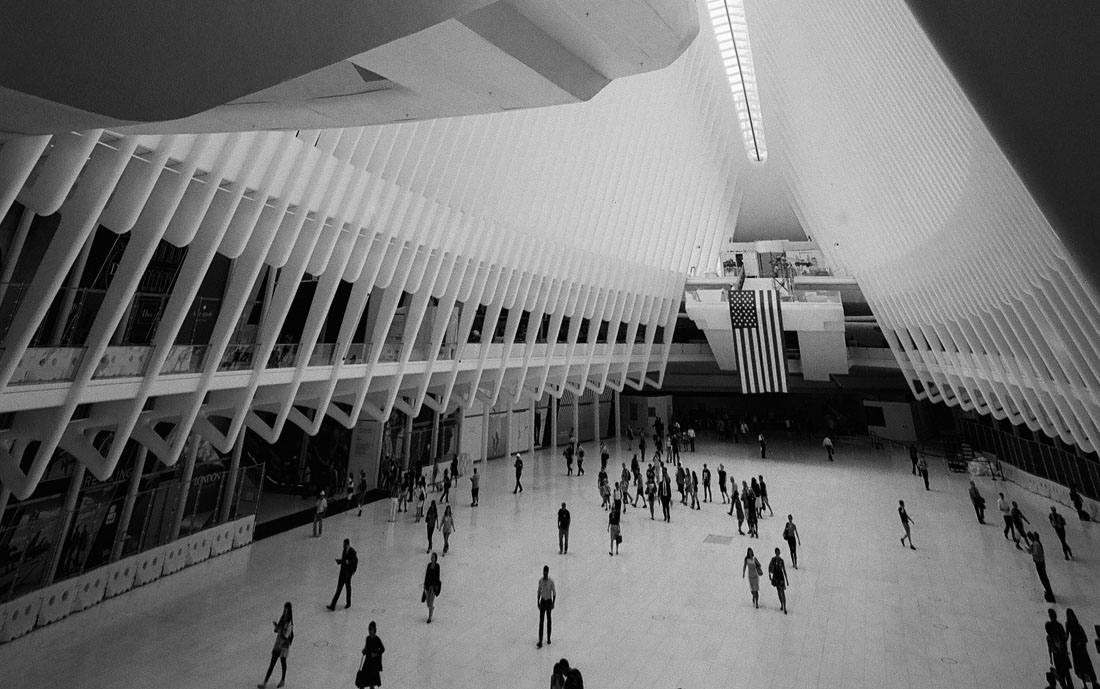 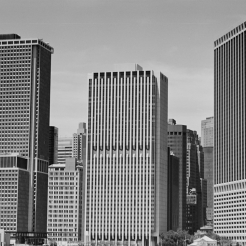 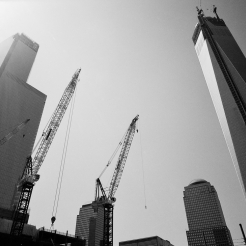 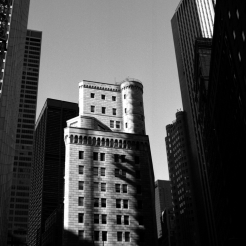 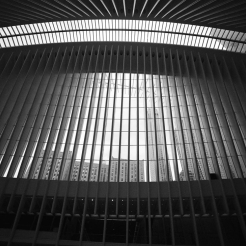 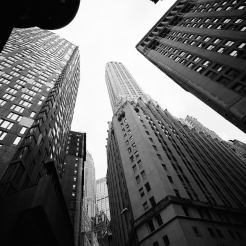 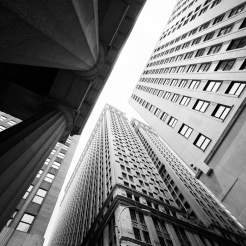 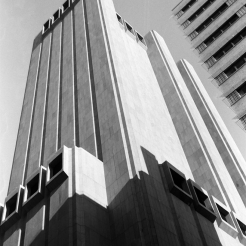 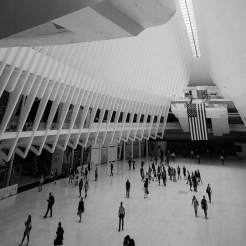 These photos were taken in lower Manhattan (New York City) over 10 years. All were shot with 35mm B&W film and I did no post-processing other than cropping.

#5 and 6 were part of a project to dramatize "the canyons of Wall Street" by shooting almost vertically. Multiple famous B&W photographers have shot lower Manhattan, especially during the first half of the 20th Century, but very rarely from this perspective.

#3 is the Federal Reserve Building of New York. "The size of the three-tiered building is said to take after that of Pitti Palace, while its sand and limestone facade mimics that of Palazzo Vecchio. The ironwork and arches are borrowed from the Strozzi Palace. All were homes of powerful banking families during the Renaissance period. Each palace was owned by the Medici at one time. Strozzi palace was seized by Cosimo I de’ Medici after the death of Filippo Strozzi the Elder and was not returned to the Strozzi family for another thirty years." (Source: http://medicidynasty.com/ny-federal-reserve-bank-pitti-palace/)

Stuart Skalka has been based in Reno, NV for almost six years. He previously lived in southern California, Las Vegas, and New York City.

Stuart Skalka shoots B&W and color using medium format and 35mm film, as well as digital, cameras. His aesthetic is to create original, engaging images without doing any post-processing except for cropping and spotting. The occasional exceptions are when he converts color digital images to black & white or oversaturates colors.

LightSpaceTime awarded an Artist Showcase to Stuart Skalka in January 2020.

In 2019, through December, he has exhibited in 19 art shows including Manhattan, Brooklyn, Wichita, LA, San Francisco, Tampa, Orlando, Atlanta, Kansas City, Johnson City, Reno and Portland OR. In October, Stuart Skalka was awarded an Honorable Mention by the New York Center for Photographic Art for his Secondary Colors submission; four Special Merit awards in LightSpaceTime’s Patterns, fTextures & Forms contest; and was a Fine Arts Photography Awards Finalist in the Nudes category. Two of his photos were published in the Abstract (June) issue of ArtAscent. Stuart Skalka has had solo shows in Reno, NV (2015) and Las Vegas (2013).

Stuart Skalka strives to expand the scope of his photography. In June, he participated in a palladium printing workshop at the Weston Collective in Monterey, CA.

Stuart Skalka is a member of the Center for Photographic Art in Carmel, CA.
Share
Support this photographer - share this work on Facebook.
< BACK TO GALLERY