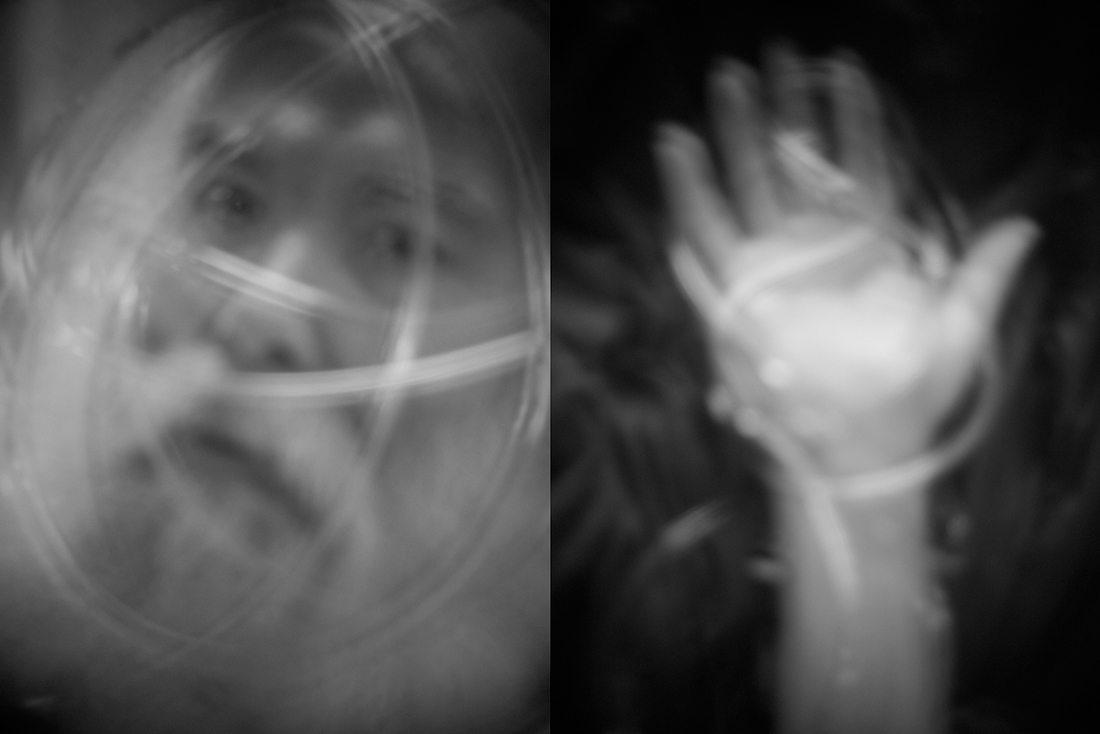 TITLE: "The Winter of Our Discontent"

Text by Miles Stryker, the subject of the portrait.

It seems at times we are bound by a primordial destiny which wraps our lives in a vast array of unseen circumstances, colored by pain or pleasure. I entered surgery with hope, even a vigorous possibility of being free of chronic back pain, and a cheerful, if not naive, trust in medical science. Then my heart was damaged in the nine-hour surgery and less than a month later I was trapped in a dark world of screaming brutal pain and hallucinations. This great storm was brought on by a bacterial infection which curls around the body, hides at times and disables the host body viciously. Pseudomonas is a deadly bacteria which resists most antibiotics.

Hospitals are terrible places at times, loud, chaotic, and mechanical. Time slows with pain. When I woke up there were tubes everywhere. I imagined a giant octopus coming from a sea of lights, circulant and unrelentingly bright. They seemed to converge in a tangle at my hand. Tape and dried blood held them together. Their lack of opacity confused me. How could these transparent tentacles hold me so surely? I looked through them and saw Diane, my wife and beloved comrade, smiling. When she touched my cheek the octopus disappeared and I was left floating in a green web of reeds in the Sargasso Sea.

The cold wind and rain seemed to blow into my heart awakening a vast sadness. She held my hand and told me we would make it through. I believed her. A nurse came and jabbed a needle into my hand. It was the tribulation of January. We were not victorious but we prevailed. It was the winter of our discontent.

Diane Fenster's art first received notice during the era of early experimentations with digital imaging. Her work has been called an important voice in the development of a true digital aesthetic. She views herself as an alchemist, using digital tools to delve into fundamental human issues. Her work is literary and emotional, full of symbolism and multiple layers of meaning. Her images have appeared in numerous publications on digital art. She has been guest lecturer at many seminars and conferences, her work has been internationally exhibited and is part of museum, corporate and private collections. Her images appear in numerous publications on digital art including the APERTURE monograph METAMORPHOSES: PHOTOGRAPHY IN THE ELECTRONIC AGE, WOMEN, ART AND TECHNOLOGY published by MIT press, and ART IN THE DIGITAL AGE edited by Bruce Wands, School of Visual Art, NYC.

Recently however, she has been moving away from the digital photomontage style that brought her so much recognition and is exploring starker imagery that has its roots in traditional photography and alternative process rather than montage. Recent exhibitions include ALTERNATIVE PROCESS at the Center for Fine Art Photography, Fort Collins CO, COLOUR BURST and the BLACK AND WHITE exhibits at PH21 Gallery in Budapest, Hungary, work was shown in the ILLUMINATE exhibit curated by Elizabeth Avedon and is included in the DIFFUSION ANNUAL 2016, Lemniscate of Diffusion. Her works were finalists in two categories (Portrait and Alternative Process) of the 7th and 8th Julia Margaret Cameron Awards for Women Photographers and was exhibited in the 2016 Biennial of Fine Art and Documentary Photographers in Berlin, Germany. She is continuing to be included in many exhibits in museums and galleries both in the USA and abroad.
SHARE
Support this photographer - share this work on Facebook.
< BACK TO GALLERY

Close
1/8
Diane Fenster - "The Winter of Our Discontent"