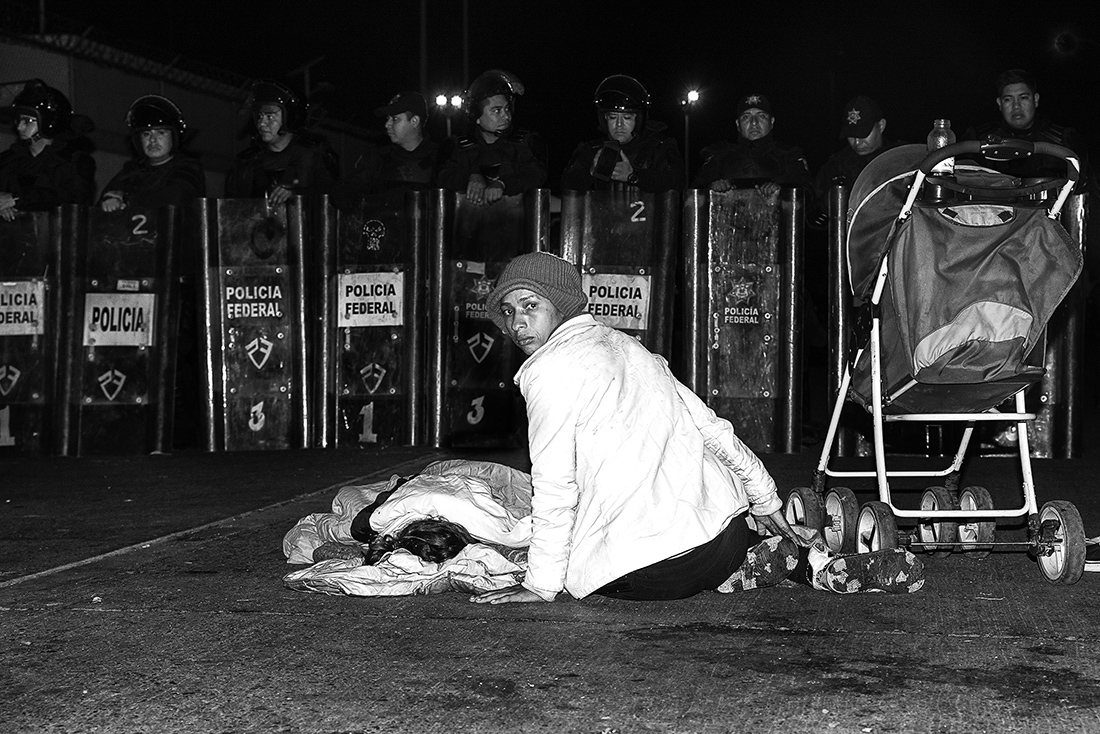 November 22 nd , 2018. Tijuana, Mexico. Taken at the San Ysidro border, this picture
depicts a mother and her child within 500 feet of the U.S. border in Tijuana. After
travelling over 2,700 miles from Honduras, migrants had been placed by Mexican
officials into a makeshift shelter in a converted open-air sports arena. They awoke
hungry on Thanksgiving Day, as rain worsened the unsanitary conditions in the
already-packed shelter. Migrants then walked to the border, attempting to present
themselves as asylum seekers to the US immigration authorities, but instead were
met with a human barrier formed by Mexican police blocking the pedestrian
walkway. Municipal authorities in Tijuana have said they are unequipped to handle
the growing numbers of refugees seeking asylum both in the United States and
Mexico. The latest numbers have 6,219 migrants based in Tijuana with an additional
1,669 migrants trekking toward Baja California from the Mexican states of Jalisco,
Nayarit, and Sinaloa.

Ada Trillo is an interdisciplinary artist who lives and works in Philadelphia. Having grown-up in Juarez, Mexico, she is deeply troubled by the social problems affecting women of the border towns. Trillo’s current work is a photo documentary exposé of low-cost sex workers in Mexico. The series includes a collection of photos taken in the brothels there, deglamorizing prostitution and showing the dehumanizing conditions of their work.

Trillo’s photographs have been featured in The Huffington Post, CBS Philly, Al Dia News, and Telemundo 51 - recently, they have been included in the Philadelphia Museum of Art's permanent collection and selected Best Series in the Black and White International Awards. She studied in Italy and Philadelphia, and her work has been shown in solo, two-person, and group exhibitions. Trillo speaks at conferences and universities, regarding women’s issues and human trafficking. Her work is represented by Racso Fine Arts and Twenty-Two Gallery.
Share
Support this photographer - share this work on Facebook.
< BACK TO GALLERY