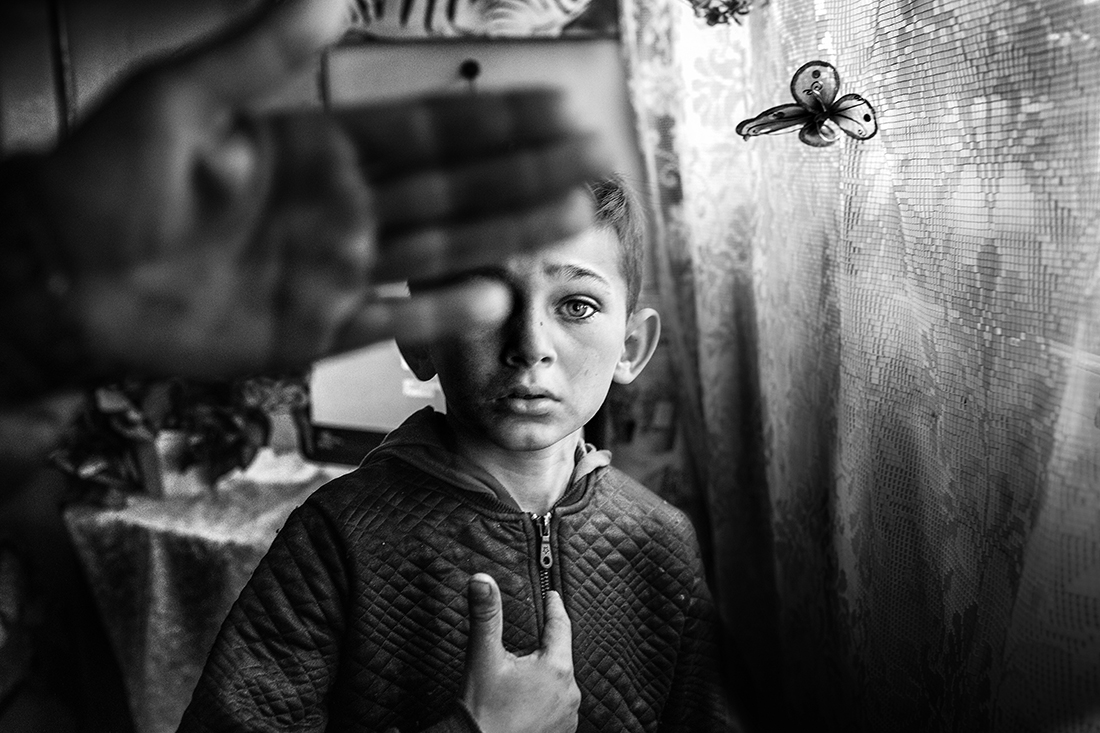 This photo of a Bosnian gypsy boy was taken during a wedding party in a gypsy camp on the outskirts of Rome. In particular, this melancholy look represents a little of all Gypsy children born in a very hard and sometimes cruel reality, which gives them no hope for the future (Accomplice of all this is also the very low schooling of the younger generations). These authorized camps today have become large Ghettos where in addition to overcrowding, and the presence of large quantities of urban waste that make the camps more similar to large open landfills, different ethnic groups are forced to live together. Often these ethnic groups also belong to different religions such as the Orthodox Christian and Islam. All this does nothing but make the environment highly explosive. Next to all this there are many illegal situations, famous for example is the phrase: "Gypsies make more of the drug". Words used by the boss Salvatore Buzzi, intercepted by the Police in the investigation "Mafia capital" that overwhelmed the administration of Rome in 2015.

HOME
STORIES
BOOKS
BIO
CONTACT
P H O T O G R A P H E R
Pietro Di Giambattista born in Pannarano (BN) in 1956 and he lives and works in Rome. After having studied technical studies he started a full-time classical guitar course and in 1991 he became a performer. He decided to give up the study of the guitar and dedicated himself to photography, devoting his attention mainly to landscapes and portraits. In 1992 he won the 1st prize in a national photography competition at Ercolano (Napoli). In 1997 he enrolled at a Photography Workshop in Toscana held by the famous English landscape photographer Eddie Ephraums. From that time onwards he started taking part into workshops that will determine his professional growth. He also had the chance to meet Paolo Pellegrin and Antonin Kratochvil. In the year 2000 he met Francesco Zizola in Massa Marittima at the Toscana Fotofestival and at the Polaroid workshop he met Maurizio Galimberti. He attended a workshop with Michael Ackerman and later with Yury Kozyrev in Rome. He also enrolled in some courses at the Permanent School of Photography "Graffiti" in Rome, directed by Gianni Pinnizzotto and also attended the start-up to the profession of photojournalism with Rolando Fava . In 2002 he sent a selection of portraits that are part of his work "Nomads" at the World Press Photo where he won the third prize in the category of Portraits. In 2002 he won the 7th International photograph exhibition of Photography in Solighetto (Treviso) , an award that allowed him to publish his first book "Nomads". Pietro di Giambattista has exhibited in several Italian cities and in Barcelona. He has received several honorable mentions in several competitions, was a finalist in the 2016 Photographers Forum Magazine's, first place in the 2016 ND AWARDS in the category Editorial - Daily Life.
SHARE
Support this photographer - share this work on Facebook.
< BACK TO GALLERY