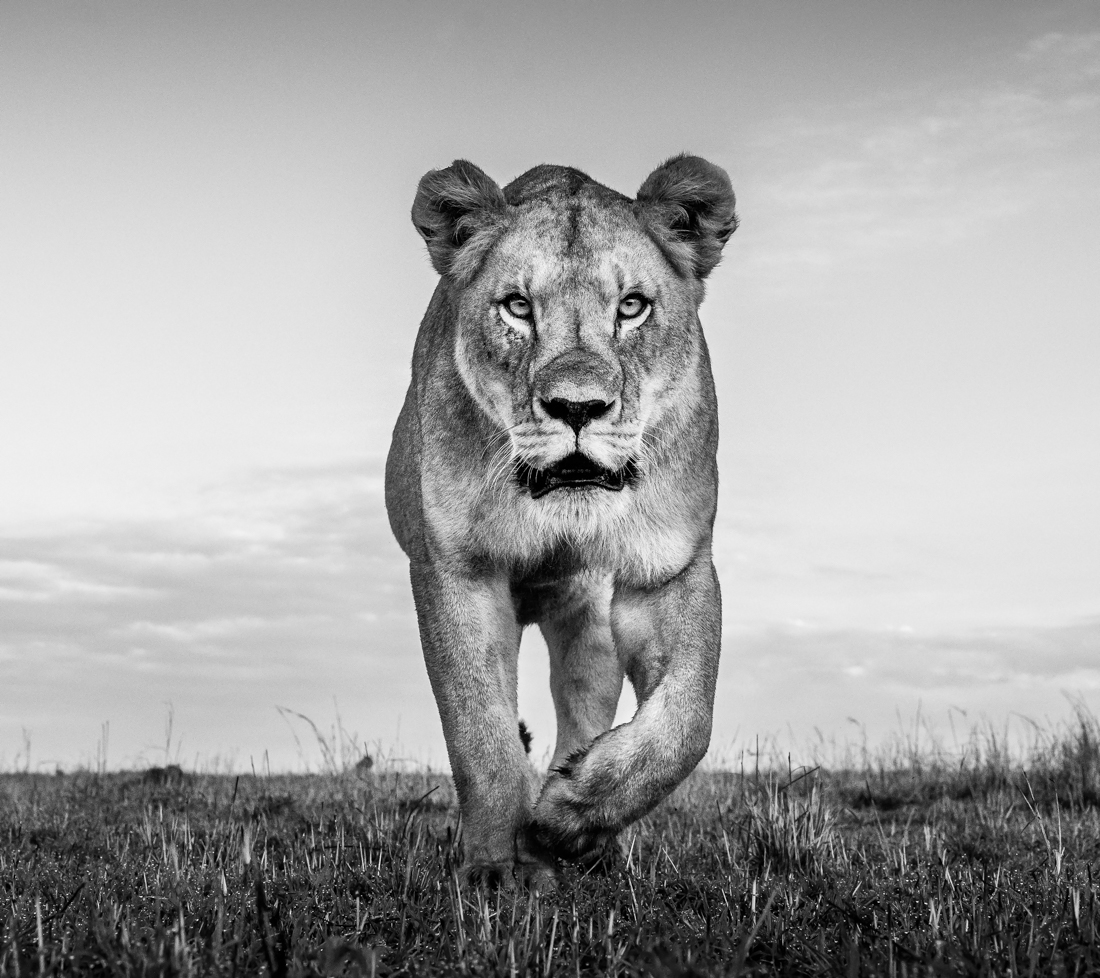 When photographing lions with remote cameras, you often have to rely on their cat instincts for an image to materialise. This makes lions great subjects for remote cameras as the smell of something peculiar is often enough to draw them towards the camera; but this also hugely increases the chances of losing your camera.

The best time to photograph lions is at first light when they are most active. This lioness was walking back to her pride after a failed attempt at hunting wildebeest some 20 minutes before. This presented the opportunity to place a camera in her path up ahead. The image was captured at 6.40am on my last morning in the Mara but my camera ended up in the possession of the pride for the best part of an hour which was quite unnerving but equally interesting as the cubs took their turn in playing with their new toy.

Thankfully, my trusty Pelican case protected the camera from the whole experience and the image is now with us forever.

James Lewin is a British Fine Art Wildlife Photographer and Conservationist with a focus on African Wildlife as it was in Kenya, where he found his passion for photography.

James is a self-taught photographer with his Fine Art Style developing over time as he continues to attempt to present African Wildlife in an immersive and visually pleasing way to inspire and connect people with the magnificent yet disappearing wildlife of East Africa.

James produces limited edition fine art prints in black and white and uses them as a tool to raise vital funds for conservation work in Africa. James prefers working with wide-angle lenses from unique perspectives unknown to any living person to create a detachment from reality while making the viewer feel as if they are right beside the animals within the frame. This technique allows for striking, intimate images with minimal distractions and clean backdrops, allowing the subject to be illuminated and connected to the viewer. James has always found cloudy skies a critical element for creating drama within a scene, which is further accentuated in black and white from a low angle. Black and white also helps create a timeless feel about James’ images, as one associate's black and white photography with history, as if the subjects within the frame are no more. A perfect example of this is the big tusker elephants with their enormous tusks, similar to those of a mammoth from thousands of years ago. Most people do not know of their existence. By portraying them in black and white, it makes them appear even more prehistoric than they are while showing people how incredible it is, that they have survived to exist in this day age and how vital their need for protection is.

James has held fundraisers and talks on conservation as well as donating prints to charity auctions. He has also been recognised in several International Photography Awards, including the Monochrome Awards and Outdoor Photographer of the Year.

James donates proportions of his profits to conservation charities to ensure the protection of the animals he has photographed and spent time with, specifically the Big Tusker Elephants that he has got to know so well and who has become his greatest passion.