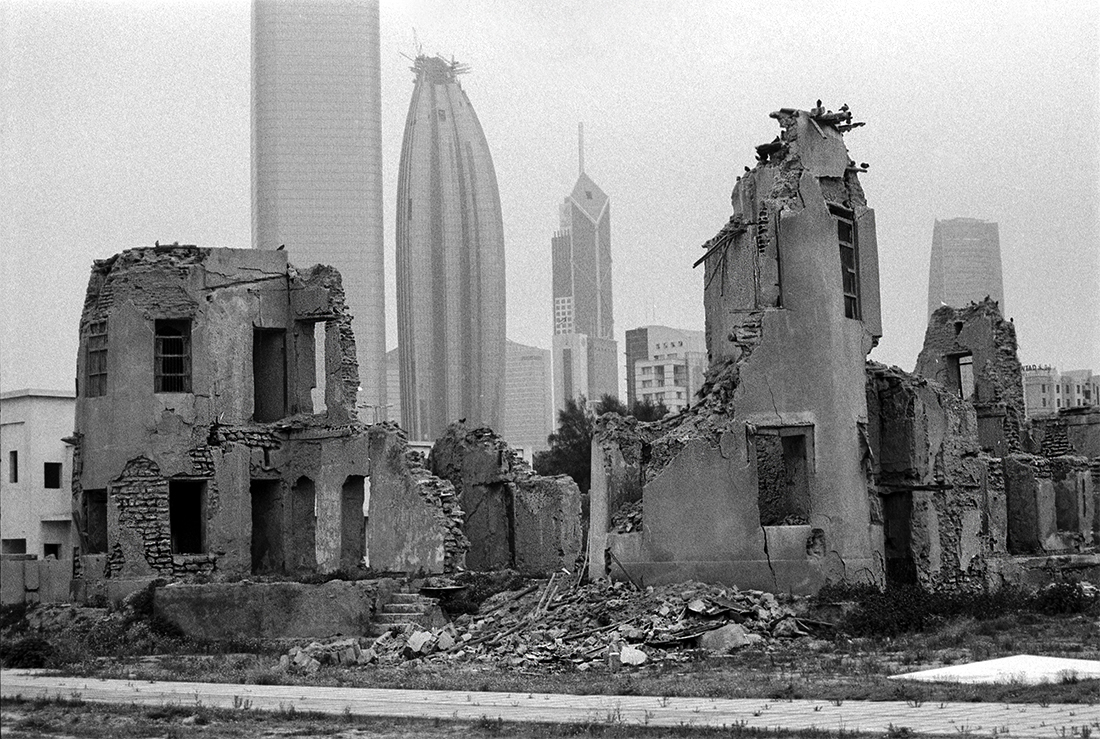 Kuwait City's heritage is rich and fascinating. Poorly documented, I decided in 2019 to start a project to build a visual archive through an on-going series called Desert Storm. While many traditional and historical buildings are being destroyed, a lot of new construction programs are starting and tend to erase completely the remains of this rich and under evaluated heritage. This analog picture is the a good example, showing the ruins of the Sheikh Khaz’al Diwan contrasting with the skyscrapers from the city in the background.

I am a specialist in story telling. For the past few years, my work and my artistic research has revolved around two dynamics: humans and their environment. I’ve questioned the new spaces and lives of nomadic populations, within the framework of the collective exhibition « Habiter le campement » (Live the Camp) in the Palais de Chaillot, Paris. This exile, often hoped to be temporary, has evolved into a permanence that obliges its inhabitants to create a new societal mode. A parallel that I found again during my work on « The Others » in Belgium, where I was a privileged observer of some regular bar customers that are often overlooked, but recognizable by their paradox of a friendly loneliness. Hence I wanted to take portraits of these special humans and their genuine emotions, who create and recreate their daily life within the intimacy of a cafe or a bistro, accompanied in their routine by comrades with shared and opposing philosophies. Much of my work has explored how places shape the social milieu of peoples anchored and adrift in spaces known and unknown in urban environments, from young bull riders in Texas to the squatters in Italy to Japanese leading out traditional lifestyles in progressive urban enclaves. Out of my ongoing research in this arena, I have developed new, but connected interests in exploring how the assembly of previously unconnected individuals placed in remote landscapes and experiencing day-to-day living far outside of the familiar generate new modalities of social relationships as well as new escapes out of that same community. I have begun to explore this theme in Jordan where I recently spent a month documenting how ancient people molded Neolithic landscapes in ways that forever altered human-wild animal relationships while also documenting immersive perspectives of archaeological field life. Through the communal experience of daily living in challenging environments, I established close relationships with the local Bedouin who pursue traditional, but relatively unknown, falcon trapping activities in the vast and silent distances of the basalt deserts fringing the remote edges of the Jafr Basin.
SHARE
Support this photographer - share this work on Facebook.
< BACK TO GALLERY