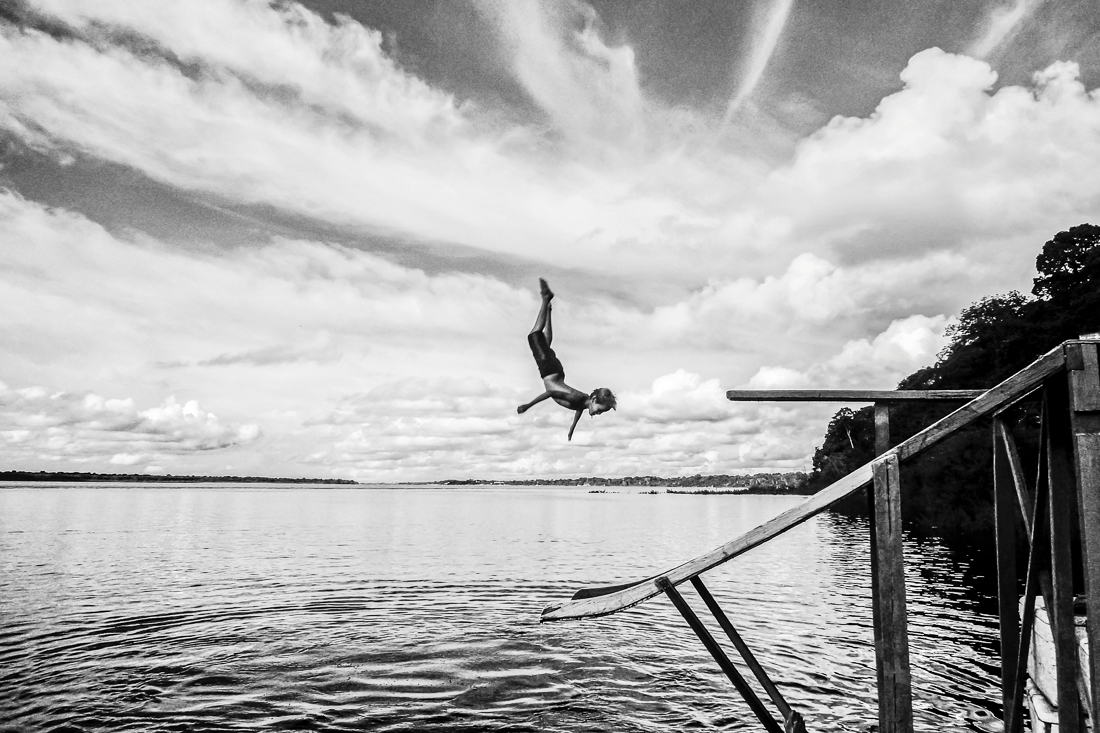 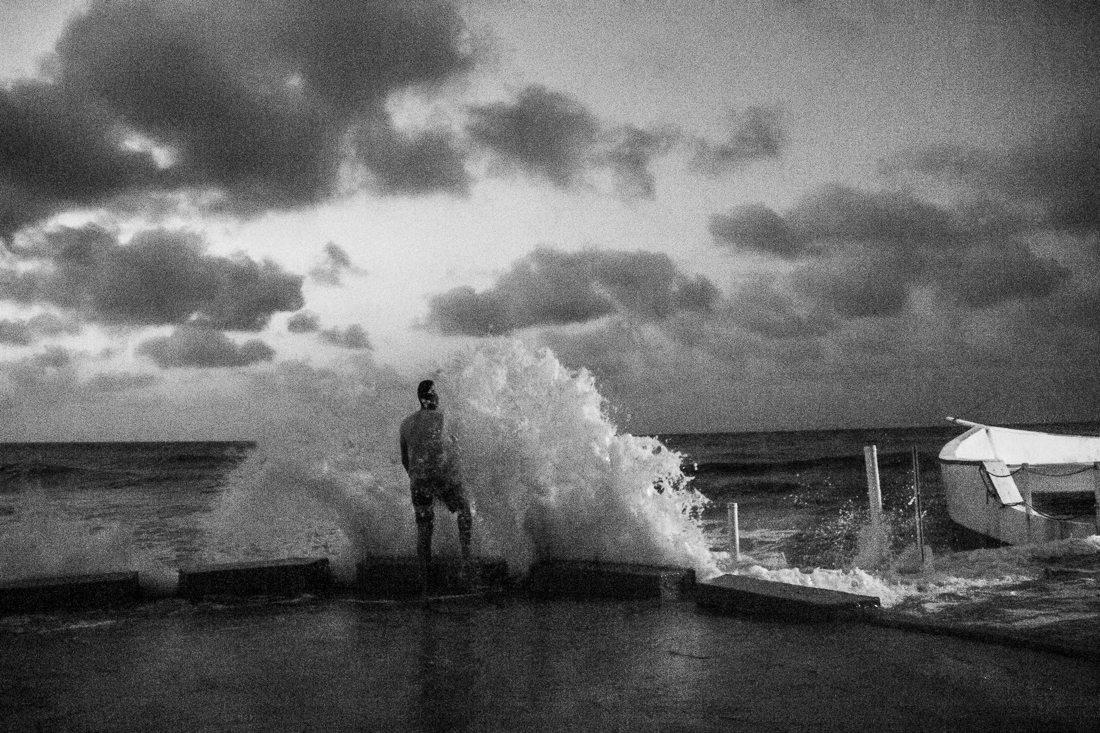 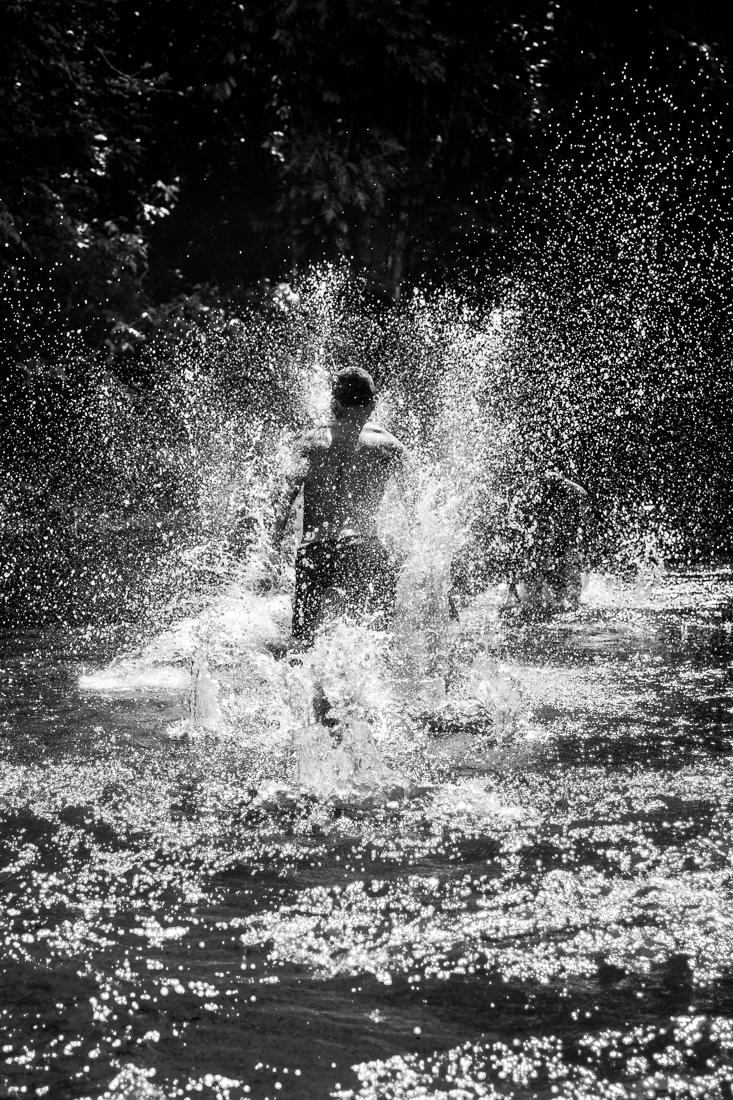 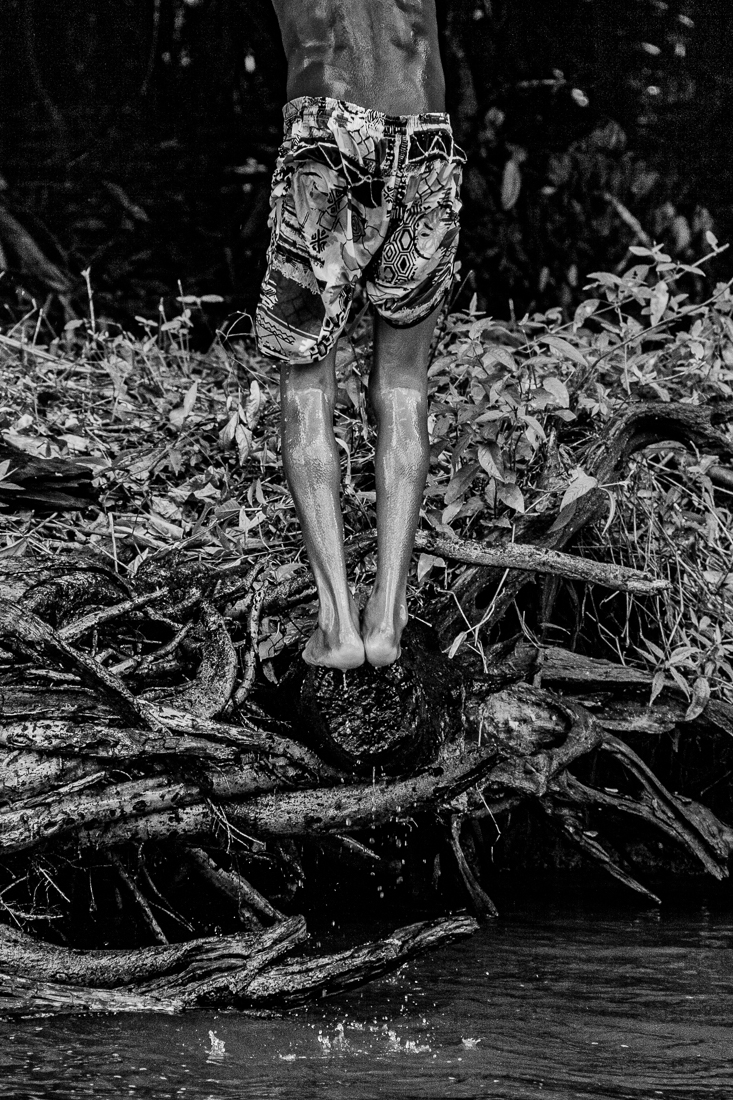 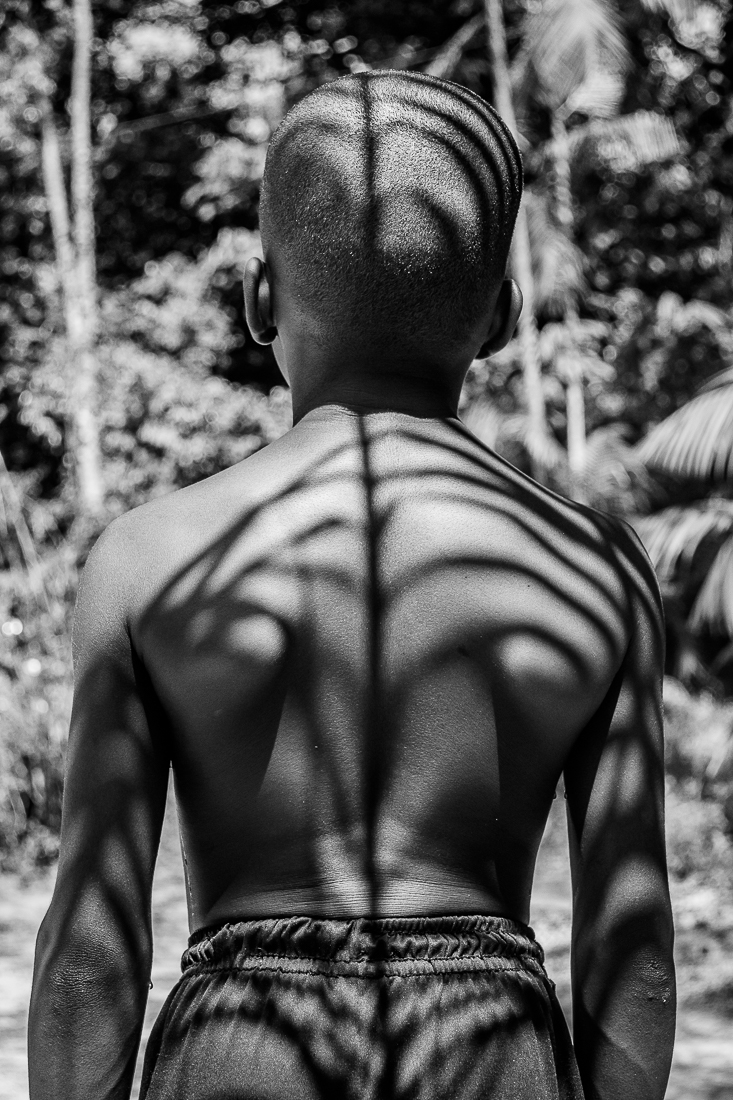 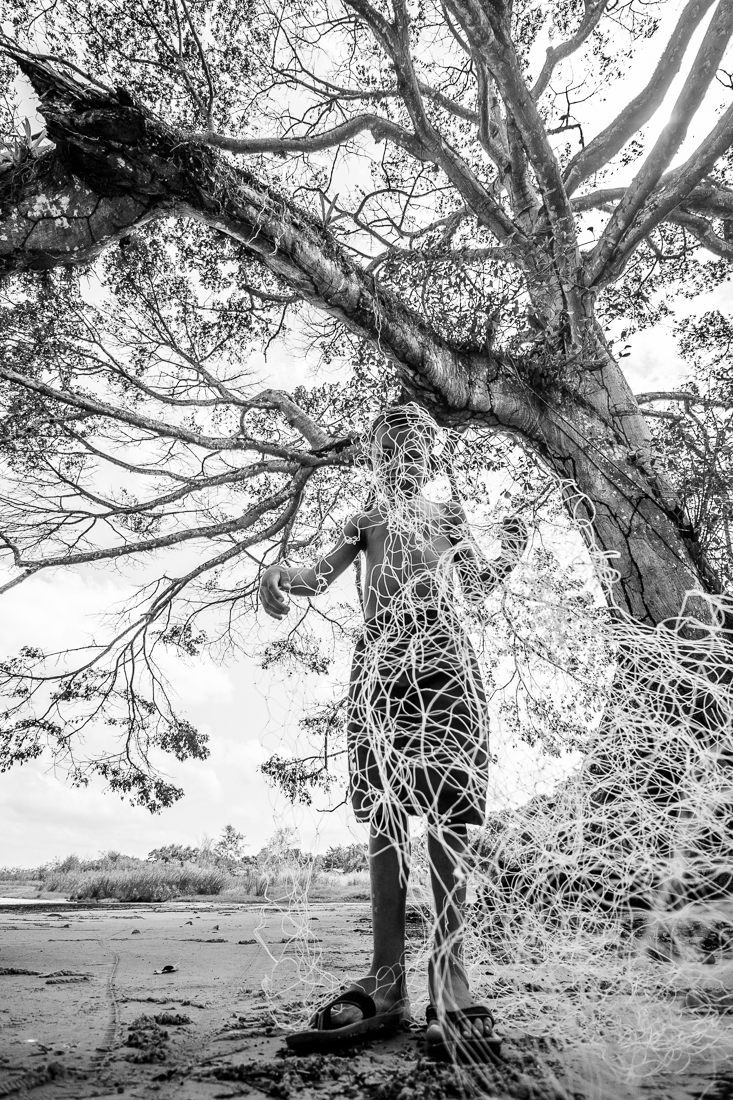 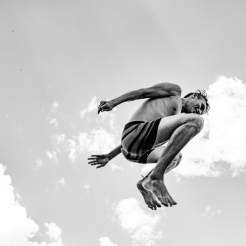 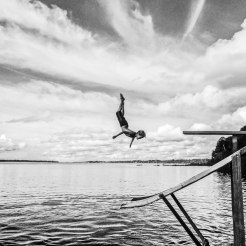 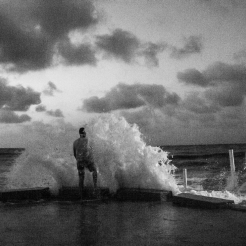 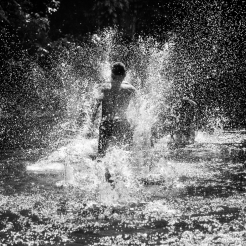 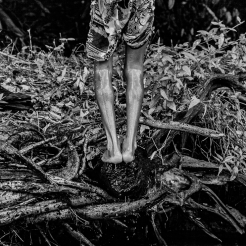 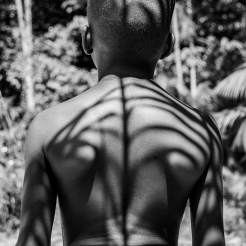 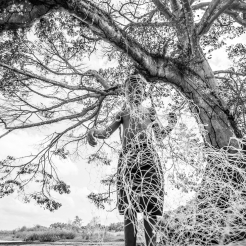 “What’s preserved, the thing or the artwork, is a block of sensations, i.e., a compound of percepts and affects”.

The images, as any artistic manifestation, enter the chaos to, from there, translate the works, monuments and series that capture the movements, the forces around that make them prints on our retinas. Through the window onpened to the eternalized moment, we’re taken to the freshness in the Amazon, imersed in a symbiosis, where the human is Amazon.

As for who lived, as for who had the sight of those lives-experiences for the first time, the photographer offers us the percepts of a life full of river and heat. He captures, even in posed photos, the spontaneity of amazonic quotidien


A Small fragment of eternity that’s materialized in the artwork and the artist try to cut from this world of possibilities. Inside this documenting and exposing job, a lot of himself is imprinted. Also being part of his own life, Rao’s roots are exposed on the strokes made of light and shadow, leaving for the viewer affects that go beyond their repertoire until the moment they behold the image. Thus, HUMANAMAZÔNIA is become. It’s where those forces that compose the artist’s body, photography and world gather in border, in co-presence, when the artist is not mixed with the work, but he is the very work.


This expression of himself is like the boat leaving the port, all safe, and suddenly faces the turbulent fury of the river-sea. In this river-sea encounter, the image is eternalized without losing its movement. It lasts. Become-HUMANA, the AMAZÔNIA is made force that drags inside the image the eyes that preseve the unique experience of sharing a here/there co-habitation. From what goes and comes back without being the same. From what’s proper from life: desire/power/creation.

In 2008, he went to take college in the coutryside of São Paulo, a change that brought him the first steps into photography. During the first vacations, back in Belém, trying to show the beauties of the city to his friends, he began to look for details, landscapes and people that had never saw before, in order to obtain imagens that pictured the place the best. Since then he got enchanted and was taken by the art that can be extracted from those simples people during even simpler moments, but not less special.

After the graduation, Rao was sent to work in Manaus, and there the photography "Carambela" was made, photo that was selected, among more than 50.000 photos, to the World Water Day 2013 exhibtion, to be held at ArtExpo New York. It was also selected to MIS (Museum of Image and Sound) Campinas - São Paulo in the end of 2012. Then other awards came, along with individual and collective exhibtions in Rio de Janeiro, Santa Catarina and Pará, also in Lisbon in 2018, 2 more to be held this year in Brazil.

Diana, a friend, talks about the pictures: "I see a humble greatness in your images. The way you look at the things and people is really interesting. It makes you look more human". Tainá Marajoara follows about Rao's work: "they're photographies of affects and percepts. Each image is a shower of life and Amazon. They're dimensioned in time and inner space.". In 2013, in Rio de Janeiro, unpretensiously shot a group of street musicians, El Cuarteto del Amor (Uruguai). After sending them the pictures, he received as an answer the greatest cumpliment someone could get: "you're a genius of the soul".

Today, besides taking a master degree in Design and Visual Culture, in Lisbon, he works as a partner of Slow Food International along with Instituo Iacitatá - Amazônia Viva, and also works with photosessions and decoration.
Share
Support this photographer - share this work on Facebook.
< BACK TO GALLERY