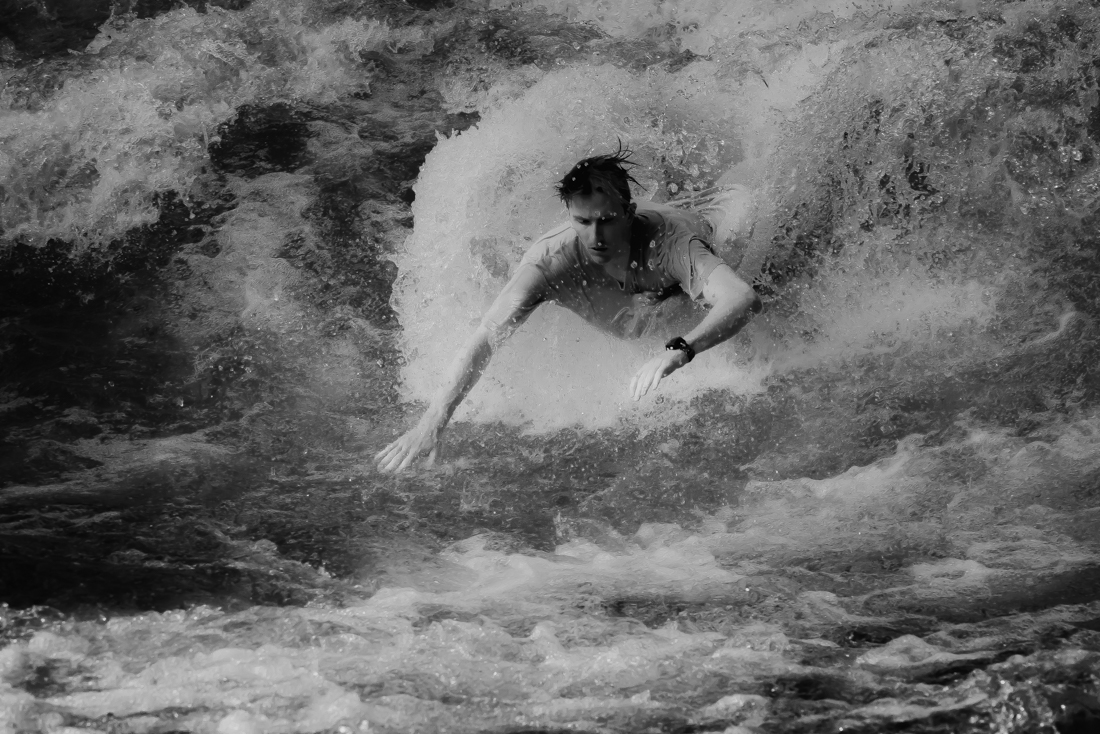 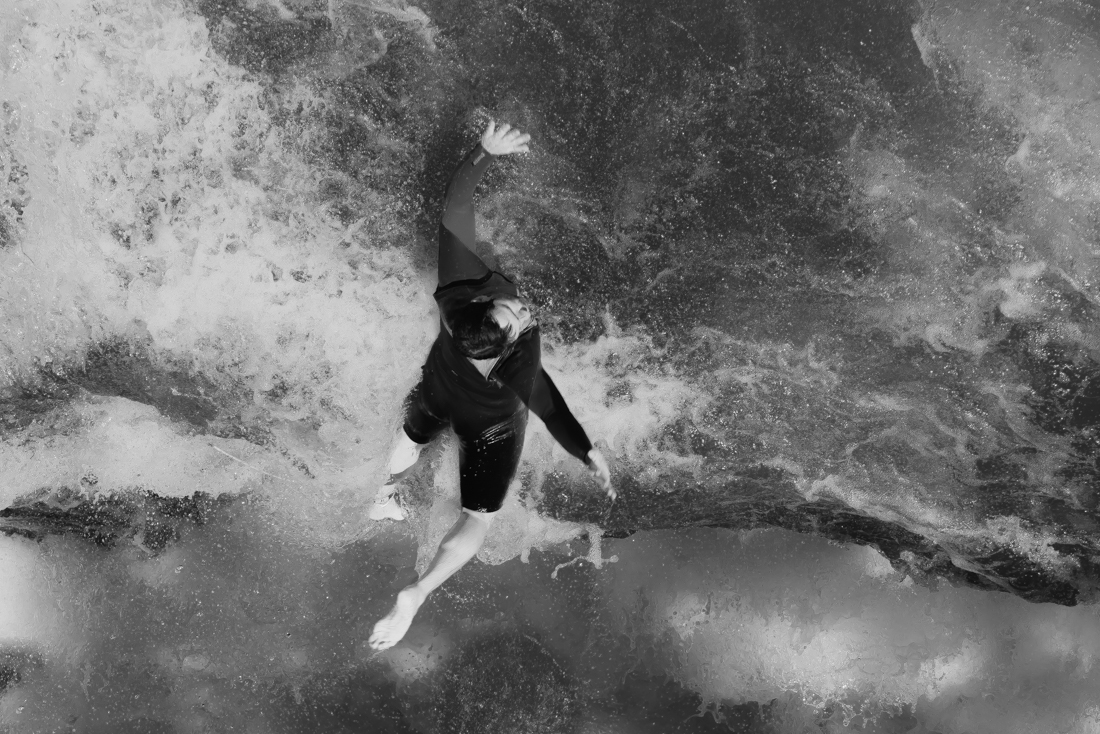 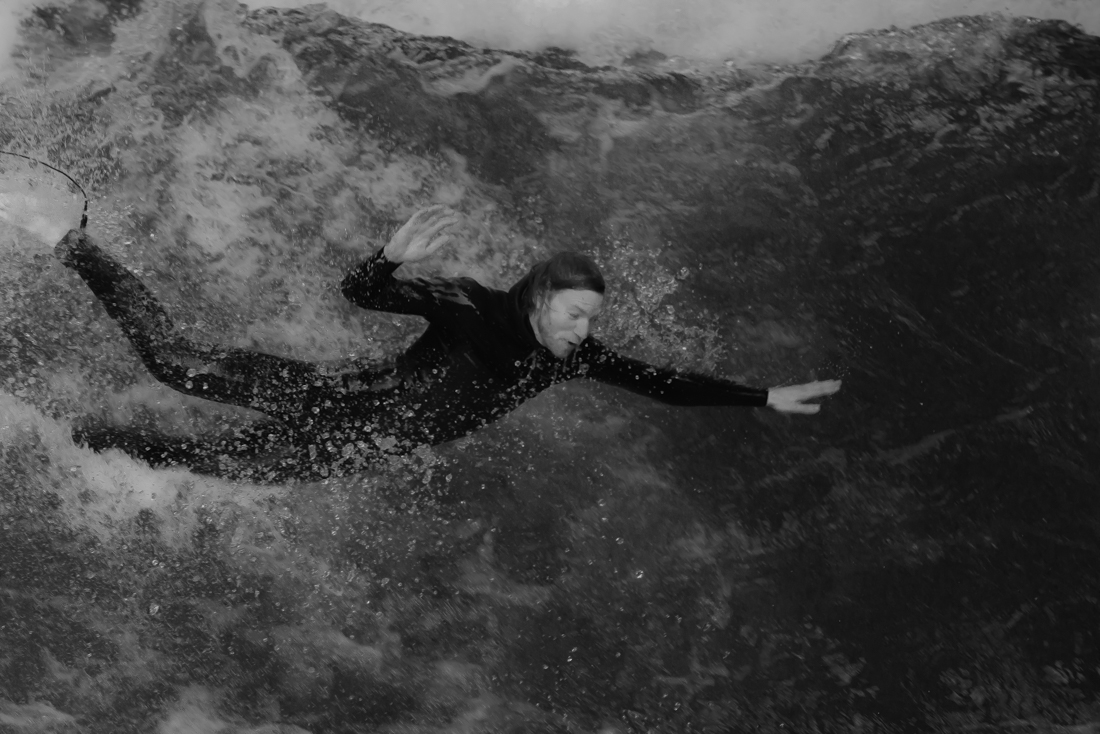 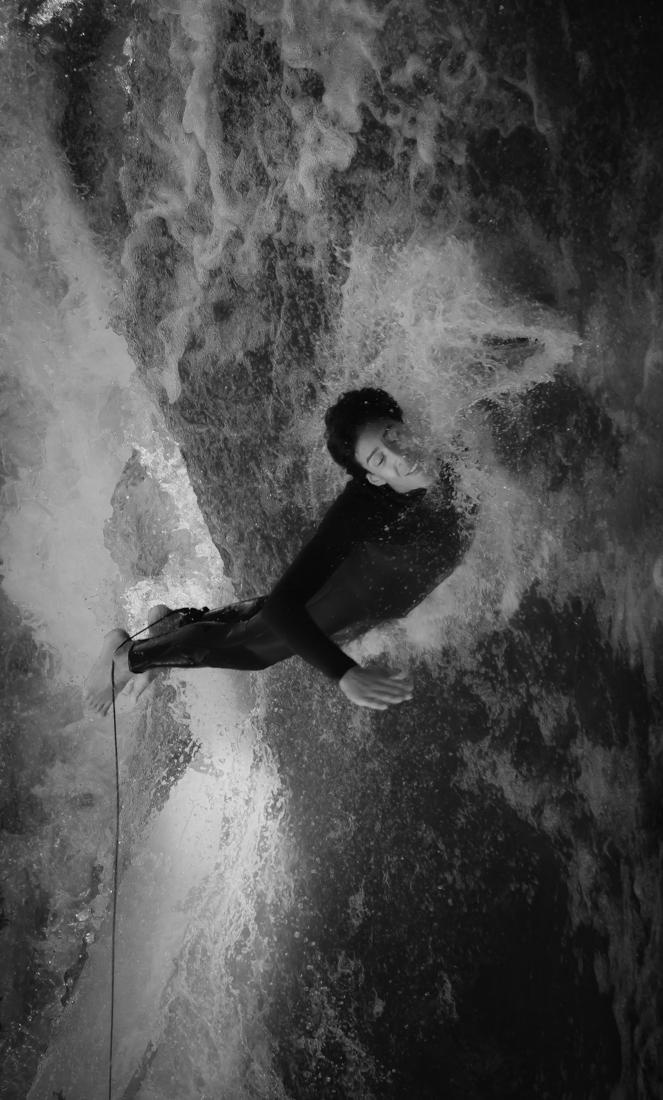 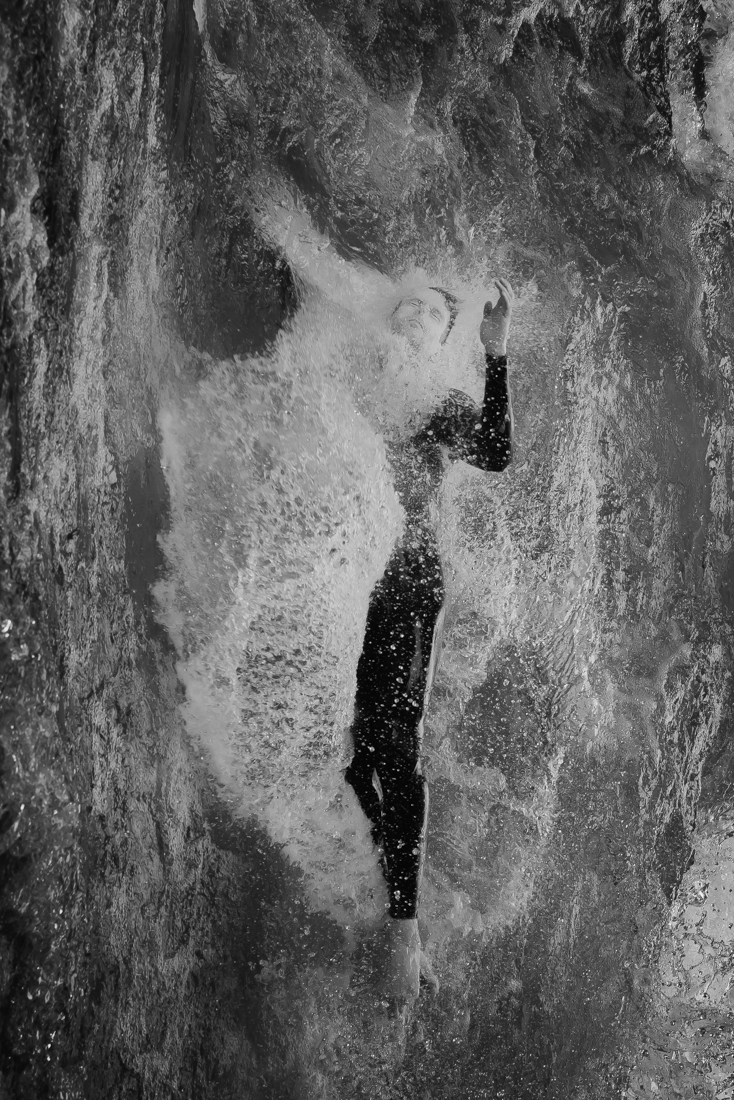 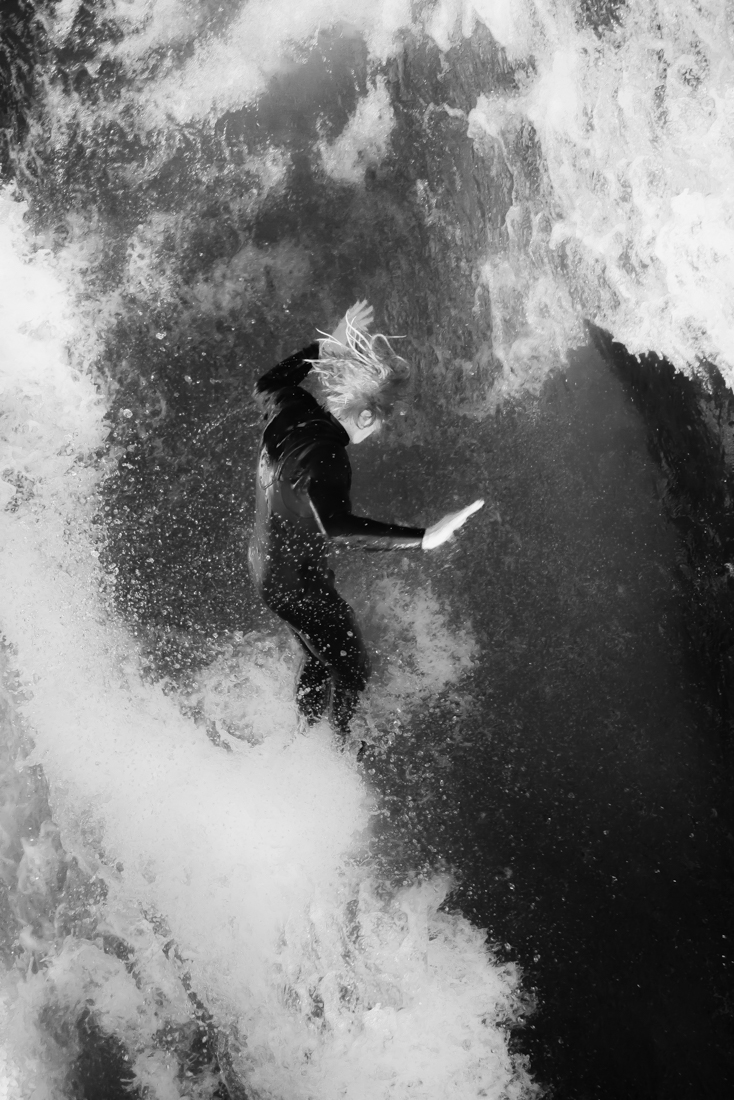 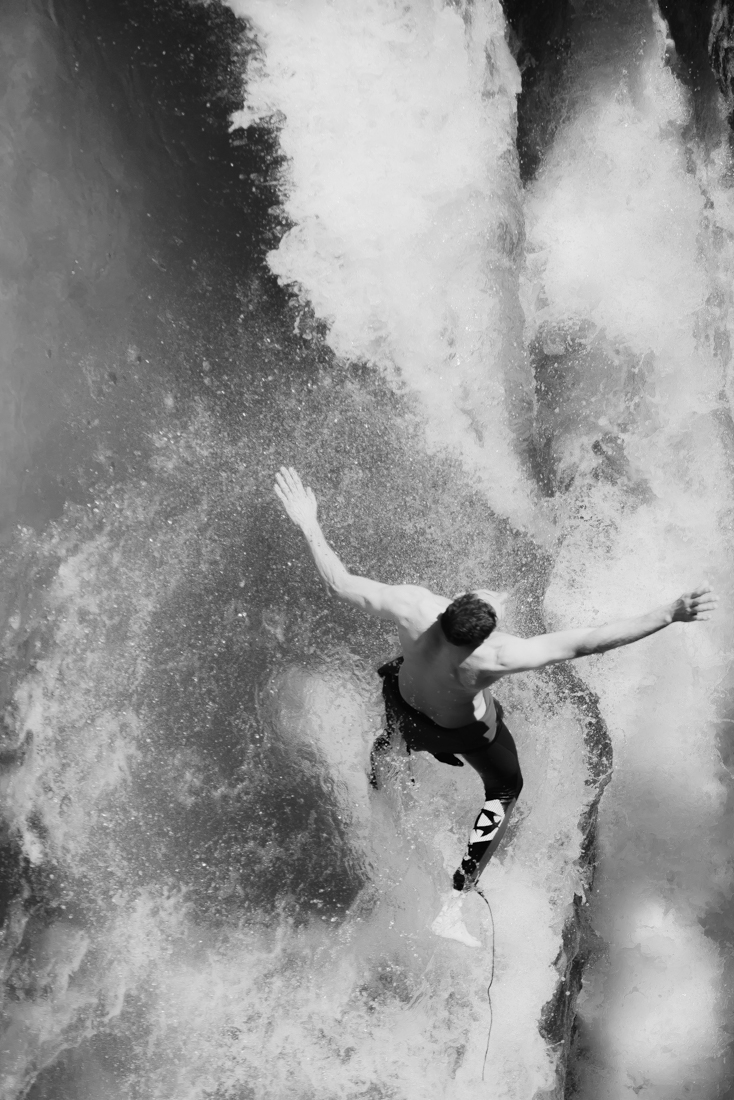 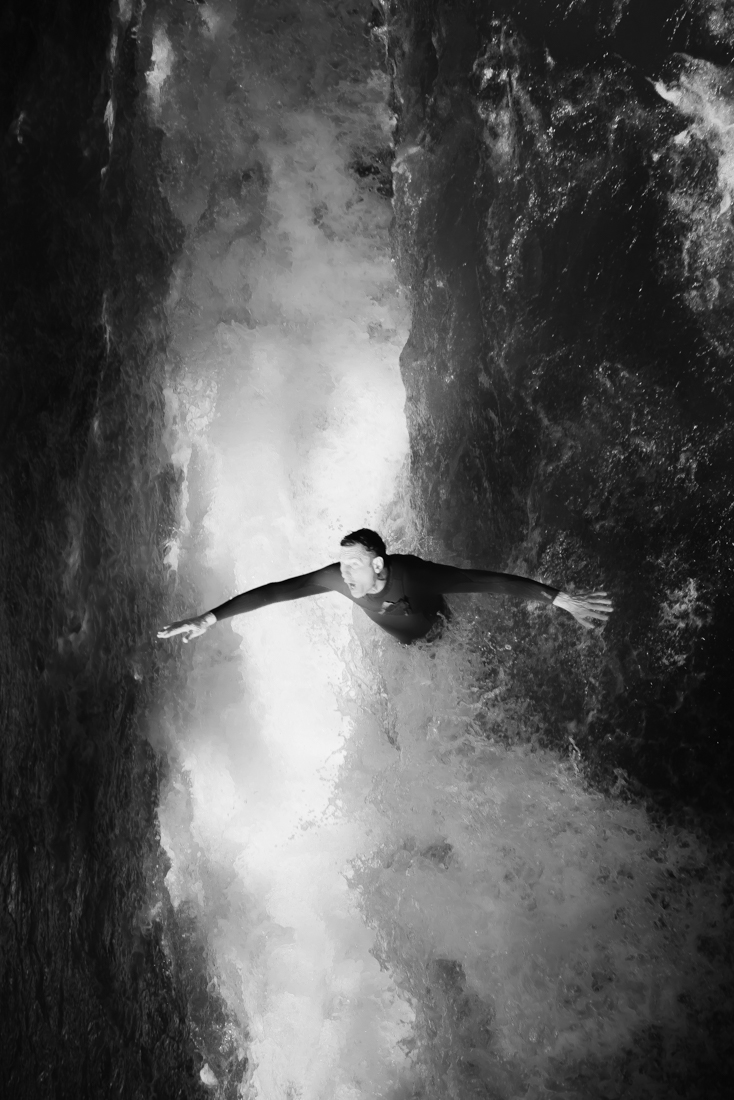 Since 40 years, experienced surfers from around the world hack the urban artificial static wave on the small man-made river at the entrance to the Englischer Garten Park in Munich.

I stayed 37 hours over this spot with a single focus on photographing the moment where ... surfers crashed into the water.

While crashing, they they become some kind of angels: gestures, face expressions as seen in the Sistine Chapel ceiling

They seem to be in the sky, caught in some kind of cosmogony.

Makers against Unmakers... Isn’t it the briefest summary of our story?

Civilisations crashing that enable new civilisations to emerge ... this theory has an echo.

Our inner self crashing then a new self-arising ... this theory has an echo.

Those crashing surfers who become creation angels are a kind allegory of the Making and Unmaking dynamics.

They are in a dual Making / Unmaking state, being both at the same time

I used Black and White
1 - to emphasize on the drama: crashing and creation are dramatic moments
2 - To reduce the noise of colour (no information added)
3 - to unify light that was heterogeneous because of the long span of shooting hours

I barely reframed the pictures
I removed nothing.

Giandra de Castro, born in 1971 in Brazil, is a self-taught photographer living and working in Paris for 37 years. From a very young age, she turned to music and writing and is a now published author and a singer or Brazilian music.
***
Photography took over all other passions in 2018 when she became a Speaker for the Water, with a body of work exclusively created with Water as a companion. Her photographic work contains aesthetics found in paintings.
***
Through the fast shutter speed exposures and unexpected choices of framing, she uncovers hidden worlds and untold stories about old times: when the world was created (Cosmogony series), ancient and primitive worlds (series Chimeras & Totems, Primitives, Atlantida), forgotten worlds and worlds-in-progress (series Drafting)
***
Giandra dedicates hundreds of hours to each series in order to combine the right states of water, the right state of weather, the right state of Nature or People, none of those parameters being under her control because no photography is staged.
***
All pictures of all series are aimed at stimulating imagination and our creativity. She then celebrates the creative power of both water and humans, as the observer takes a great part in finishing creating the picture with his own interpretations. Water here is the support of a personal oracle, and each time one finds a personal answer to the question “what is it?” he speaks outs the water he is made of.
***
She also honors the capacity of Water to unify our world (water evaporates here and reins elsewhere), and to unify what human concepts set apart and separate in silos. The horizontal surface of water erases the borders between Up and Dow, Under and Above, reality and reflections, reality and dreams.
This echoes the work of French Philosopher Gaston Bachelard : Essay of Water & Dreams
***
Giandra captures with no special effect during the click (no double exposure, no long exposure…) and editing is limited to color, sharpness, resizing, with nothing added and nothing removed.
She likes unique pictures, unpredictable and unrepeatable.
***
The aesthetic of Giandra work has raised attention since 2019 when she started going public with her work. Since June 2019 she is exhibiting in France and abroad during festivals and collective exhibitions.
SHARE
Support this photographer - share this work on Facebook.
< BACK TO GALLERY