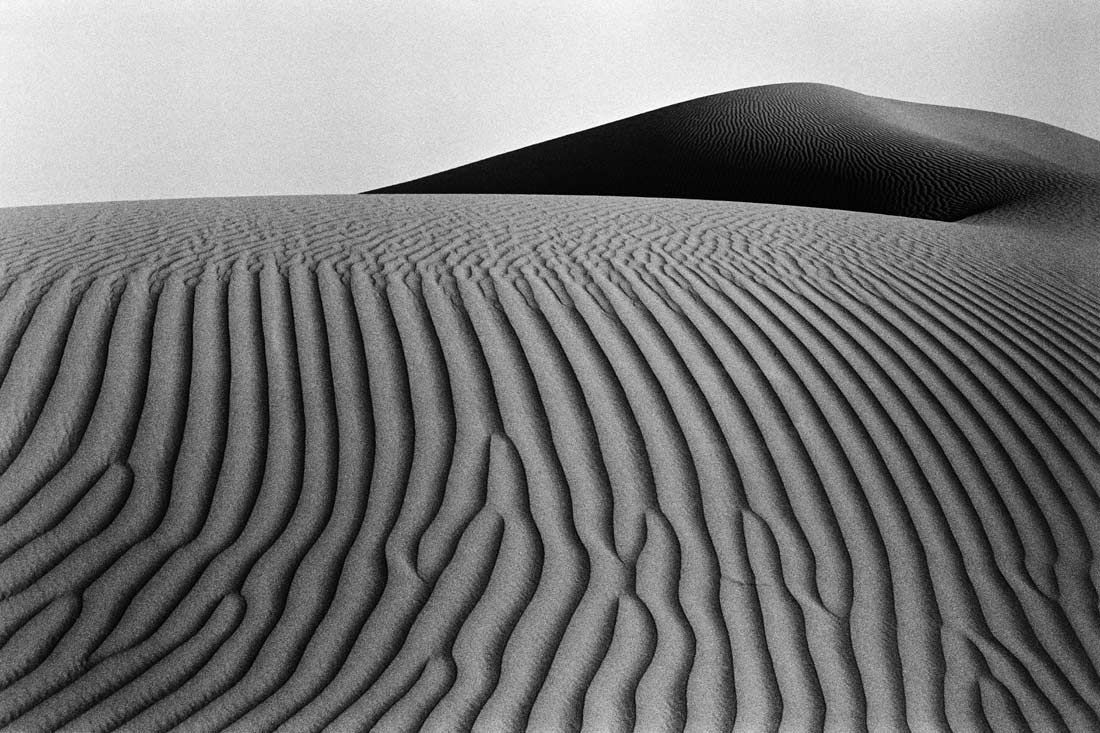 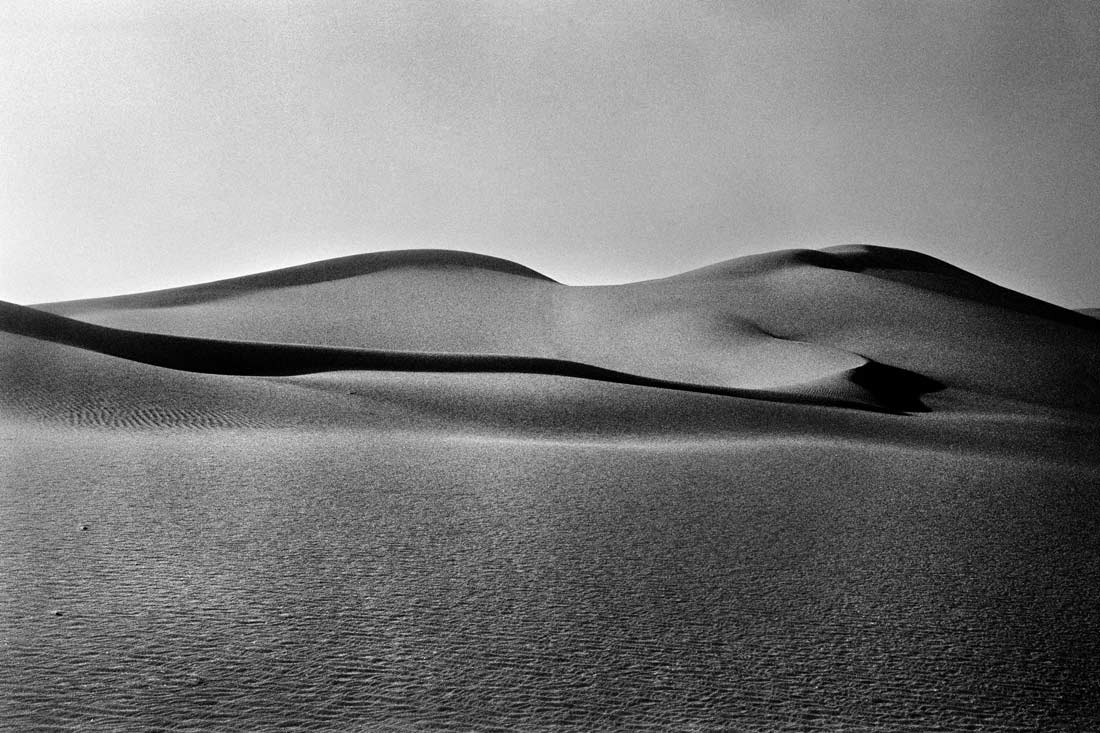 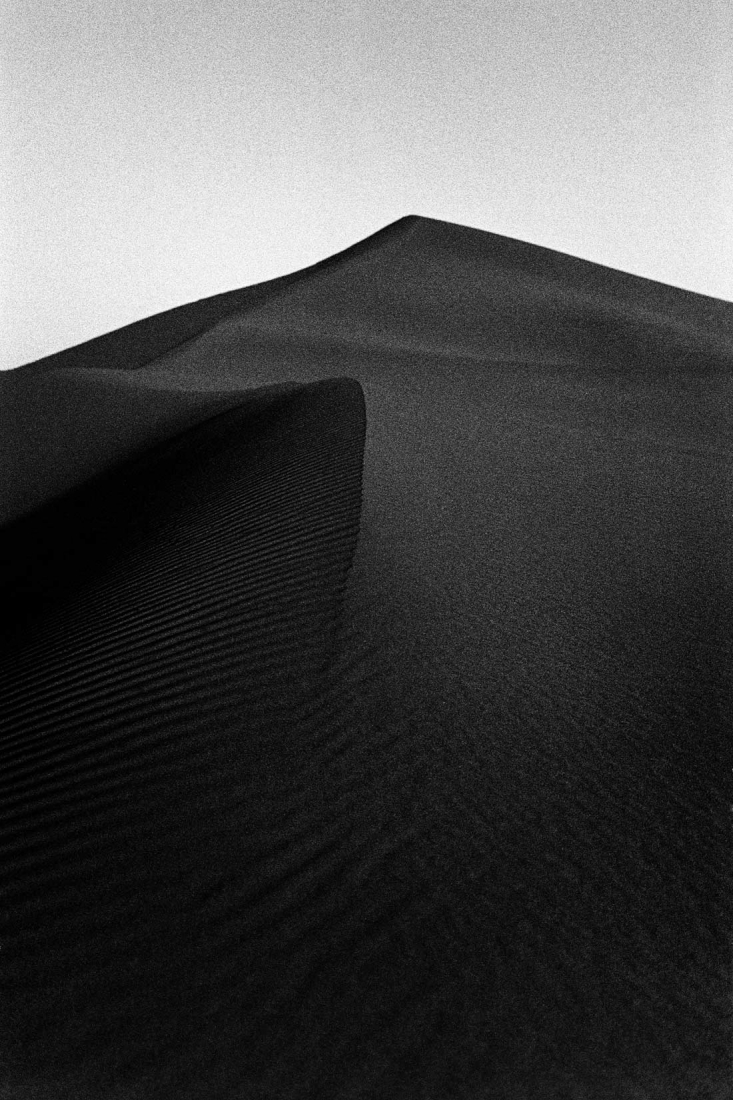 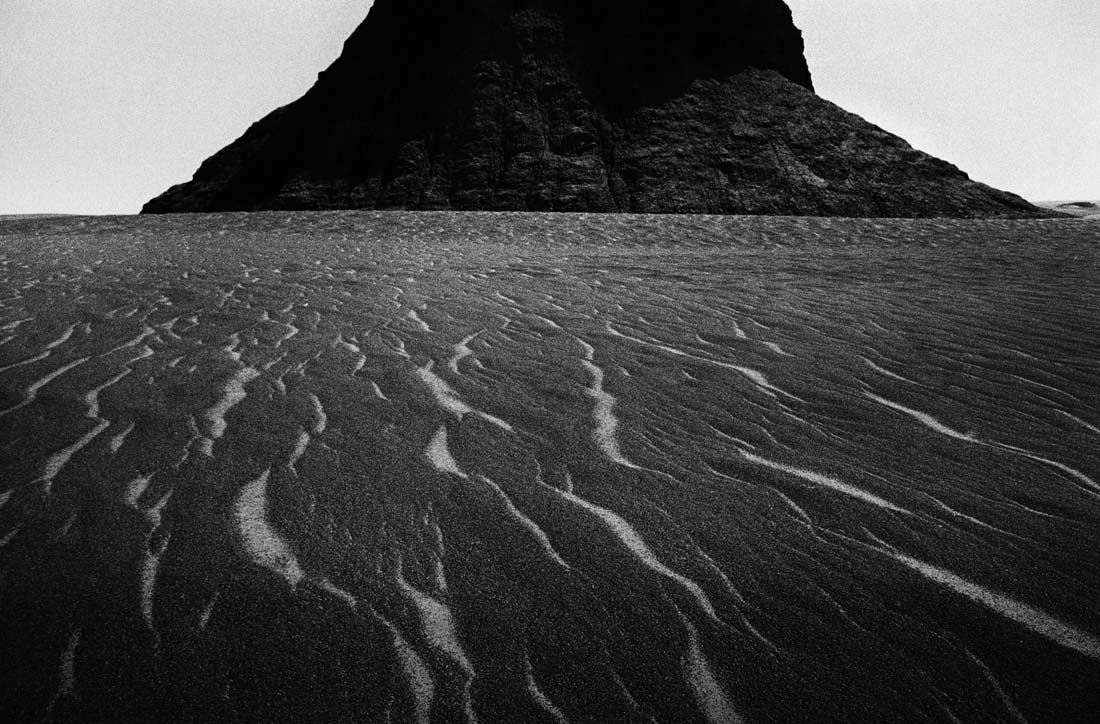 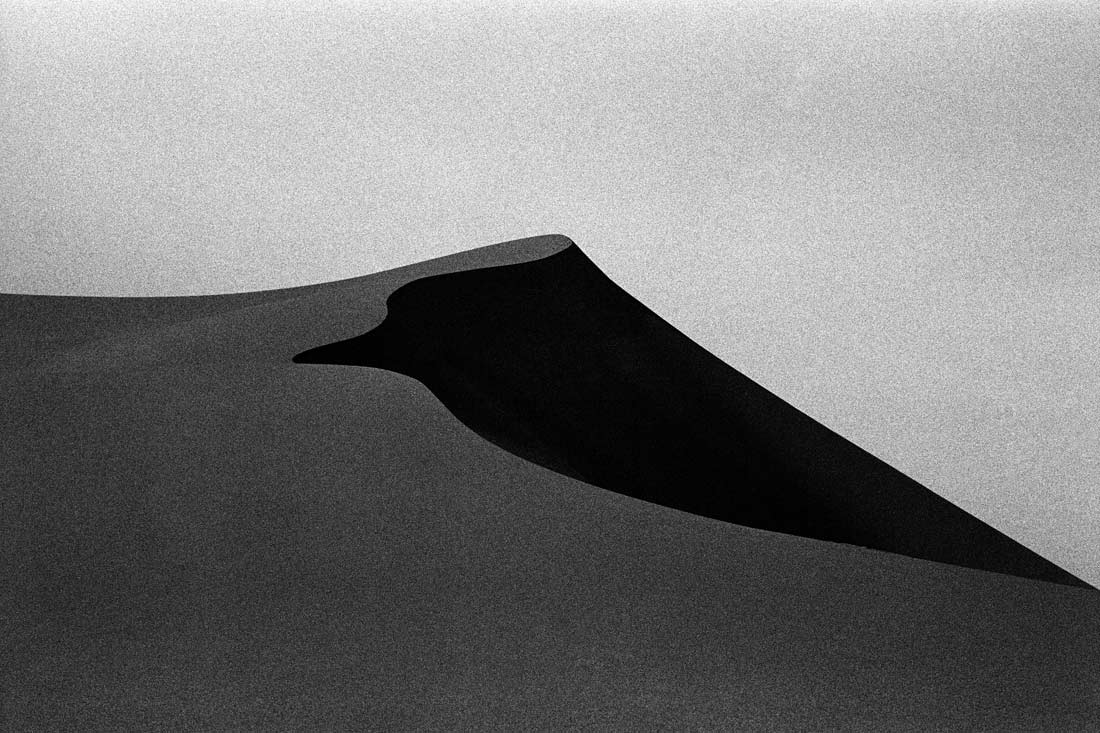 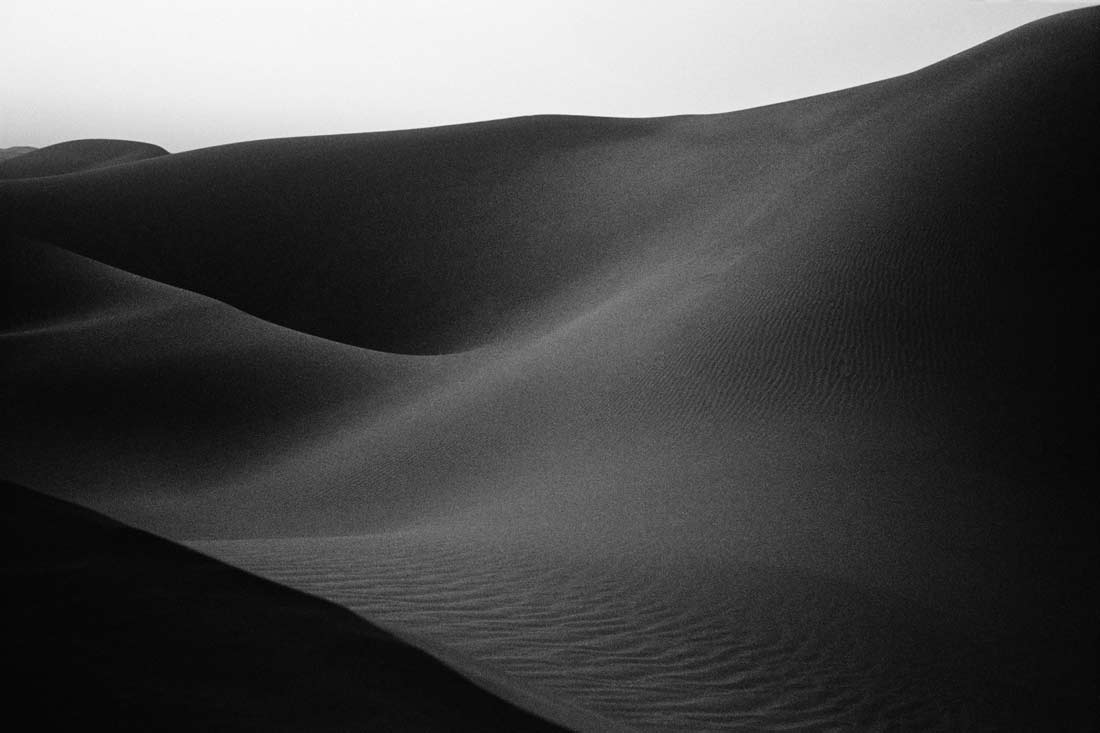 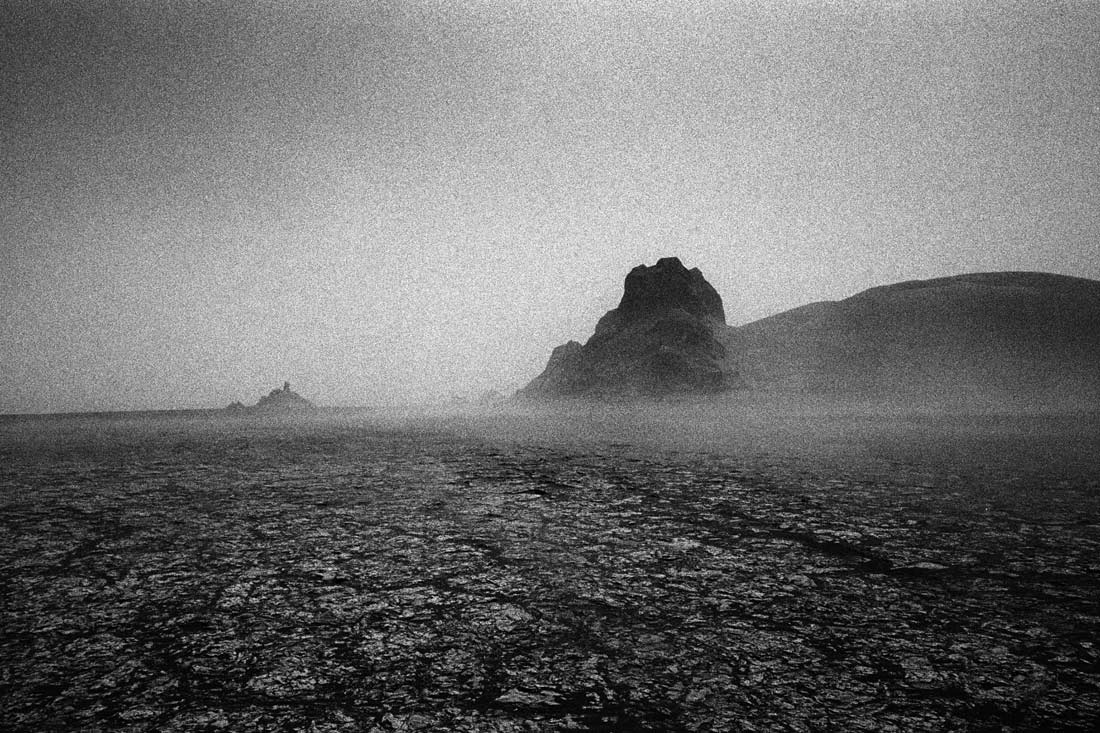 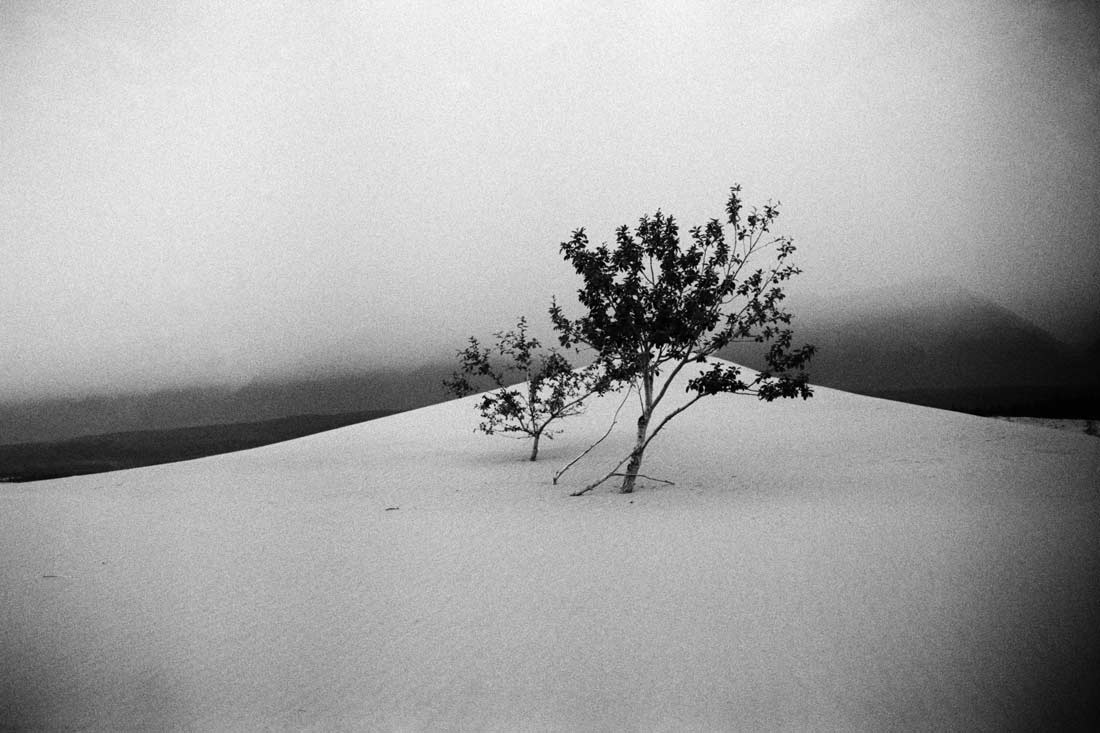 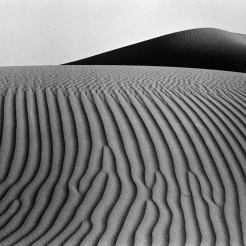 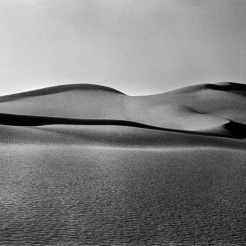 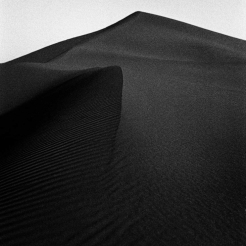 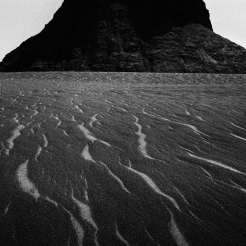 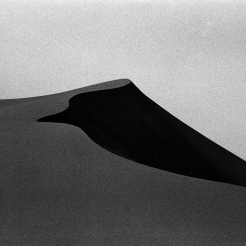 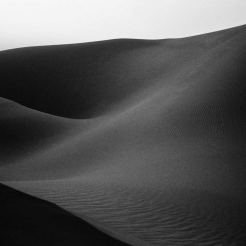 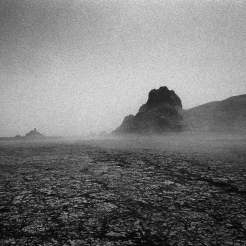 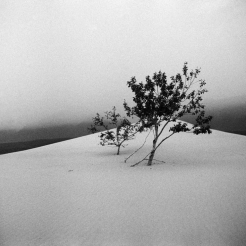 Often a photographer enters deserts to capture the beauty of the landscape with a setting sun or a beautiful cloud formation. It was not what I was seeking. I wanted to go further.

My concept has been to use the desert as a painter uses a virgin white canvas; and while traveling through different deserts of the world (from Russia to Egypt, Mauritania, Oman to the USA etc) I sought to discover what imagery was revealed to my eye.

In the South Sinai in Egypt or the dunes of Oman or the vast Dasht-e Lut, the lights and shadows transformed a seemingly neutral valley into the body of a young woman trying to emerge from the sands, into energy sources flying toward a mountain wall…

In one desert the moving sun would gradually transform a small valley into a beautiful bird. In still another desert in Siberia (Russia), a lonely tree spurts up from the white Sahara sand while an equally white, early morning, fog hovers over it; the arid desert and the water filled fog, hanging over that single tree, defiant to all odds… and I, like the painter in front of his canvas, with my small Leica, 35mm lens and Ilford HP5 film, attempt to capture this image and the soul buried within.

Conceptually I attempt to find the symbiosis between the landscape before me and the imagery buried within me. I do not seek the image rather the photograph finds me. Through this subliminal search the result is, hopefully, my photograph, my “canvas“ is an expression of my inner being, of what I feel as an artist.

John Randolph Pepper (1958) was born and raised in Rome, Italy.

Pepper’s career in black & white analogical photography started with an apprenticeship to Ugo Mulas at 14. He published his first photograph at age 15 and had his first exhibit at 17. Later, while at Princeton University he studied History of Art. Although he never abandoned his camera, he later became a Directing Fellow at The American Film Institute, and worked as a director in theatre and film for 20 years.

In 2008, he began to exhibit his work and showed ‘Rome: 1969 – An Hommage to Italian Neo-Realist Cinema’, which toured to several venues in USA and France.

In 2009 Pepper, in residence at The American Academy in Rome, began his ‘street photography’ book on Rome and the South of Italy. In 2011, “Sans Papier”, saw the light, with subsequent exhibitions in Rome, Venice, Saint Petersburg, Paris, and Palermo.

Pepper’s latest book “Evaporations” was published in 2014 with previews in Palermo and the Officina delle Zattere (Venice Biennale 2014). In July 2014 it had its official opening at Rosphoto (St Petersburg National Museum of Photography) and then travelled to eight cities in Russia, ending in Moscow in 2016. From November 2016 to January 2017 ‘Evaporations’ was shown at the prestigious Palazzo Cipolla in Rome sponsored by Fondazione Roma.
“Evaporations’ is a journey to the wastelands of solitude, fragility, and alienation. Silent, isolated figures stand au bord de la mer, facing distant horizons, cloudy skies, or dark skylines. A hint of discomfort goes through these intense, lyrical, and uncanny pictures. The American flag feebly waves in a desert landscape, or on the wall of an abandoned hut. Great dreams have been shattered yet there is still hope for tomorrow - -as tenuous, as it might seem.”
Since 2015 Pepper has been working on ‘Inhabited Deserts’.
“My concept, my goal, has been to use the desert as a painter uses a virgin white canvas; and while traveling through different deserts of the world (from Russia to Egypt, Mauritania, Oman to the USA etc) I sought to discover what imagery was revealed to my eye - -sometimes it was figurative, sometimes abstract.”
In September 2018 Pepper was one of the first Italian photographers since the revolution to exhibit in Teheran (co-sponsored by the Italian Embassy in Teheran and the Italian Foreign Ministry). After participating at Paris-Photo 2018 (Galerie Sophie Scheidecker) “Inhabited Deserts” travels to Tel Aviv, Israel, 6th ‘Festival Photo Is:Rael’. December 2018 ‘Inhabited Deserts’ opens at The Empty Quarter Gallery in Dubai (U.A.E.). 2019 will take the show to Saint Petersburg, Russia, and then again for tour of 6 cities before returning to Moscow in 2020. In 2020 it will be in Europe and the United States.
Technical information: Pepper works with a Leica M6, 35mm lens and uses Ilford HP5 film. He works exclusively in B&W with gelatin silver prints on Ilford Baryta paper, exhibition quality.