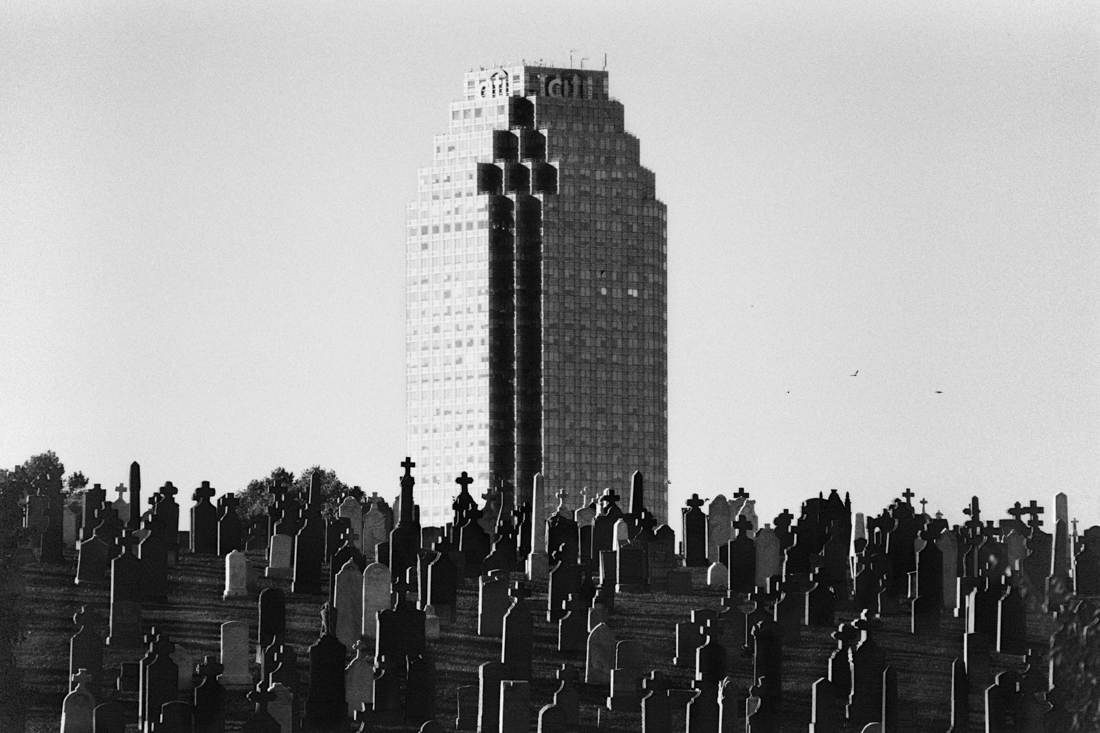 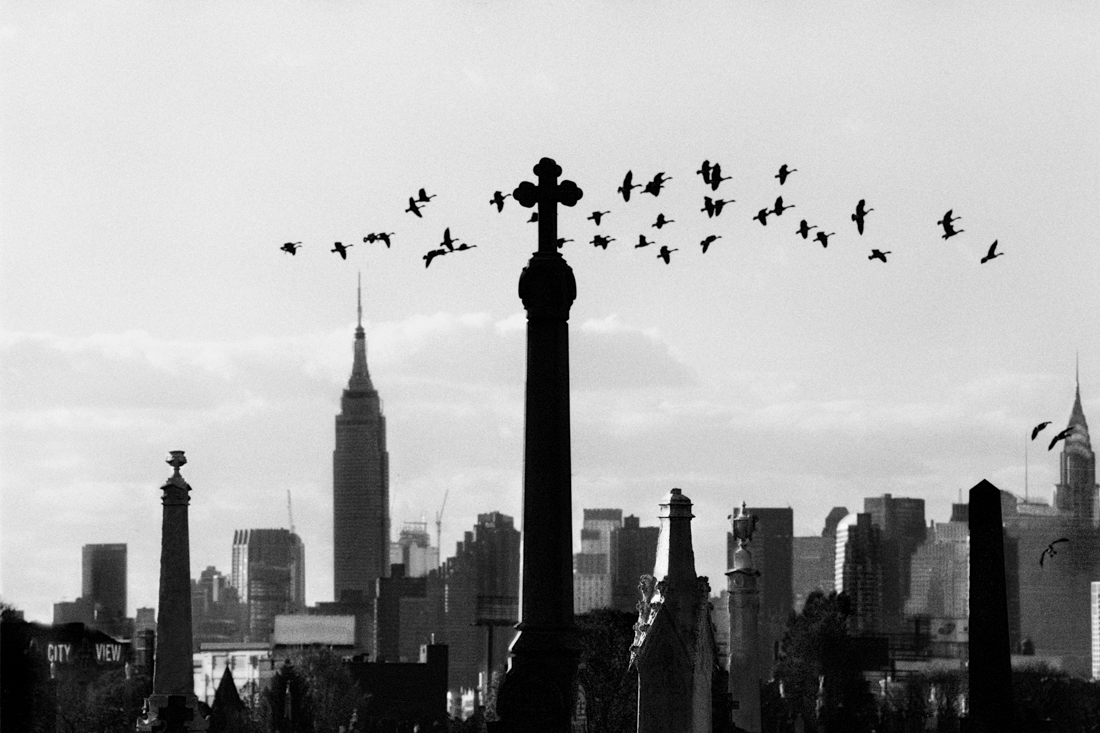 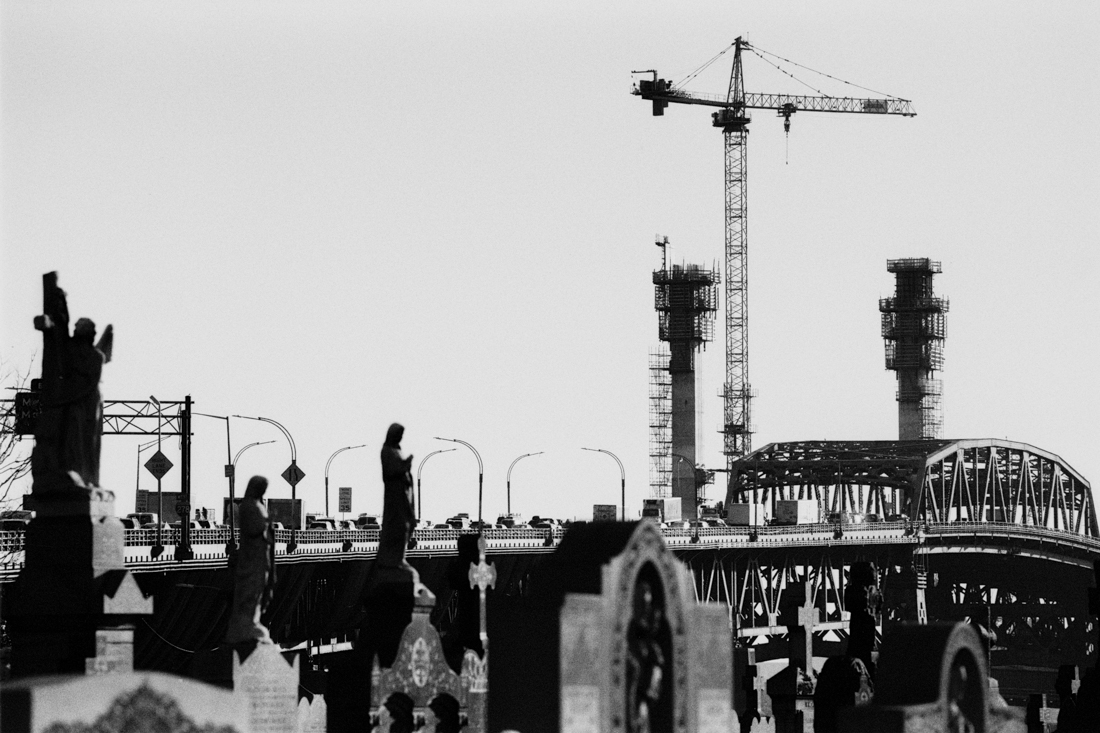 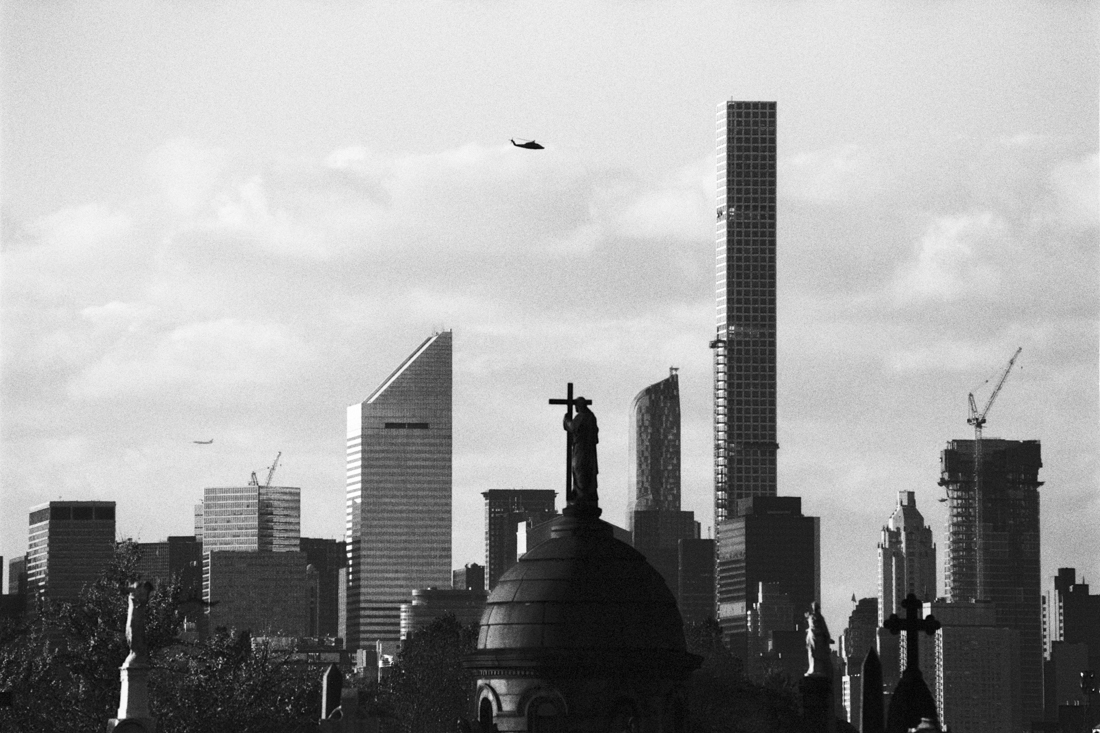 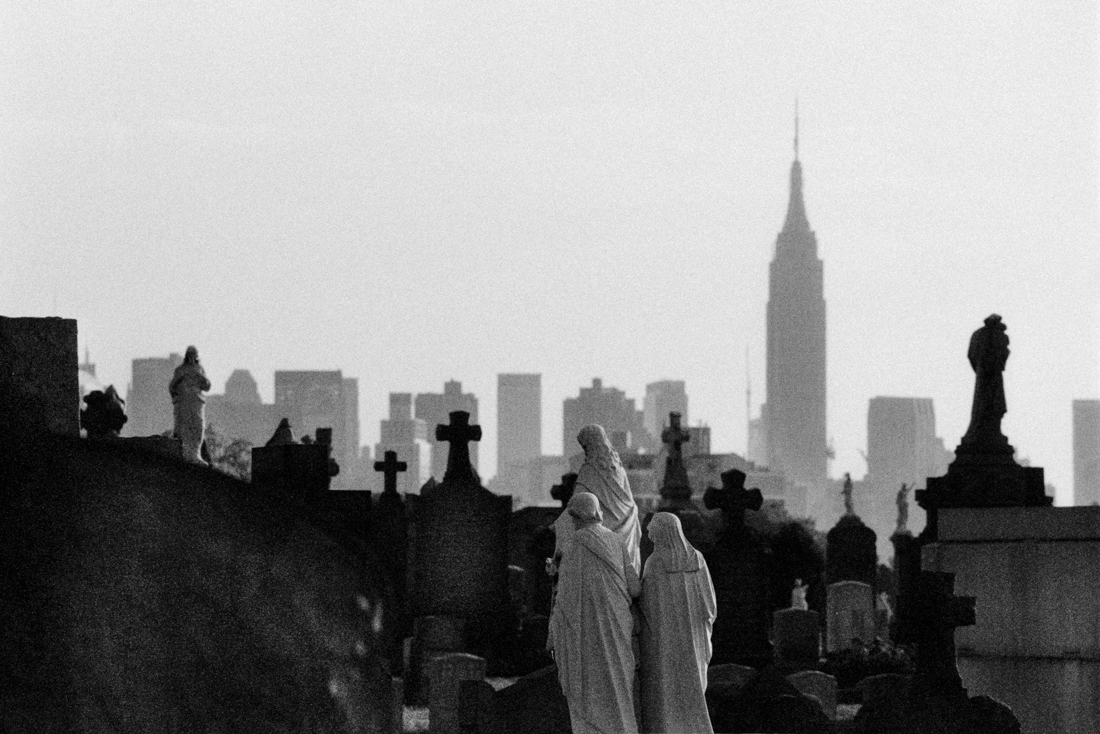 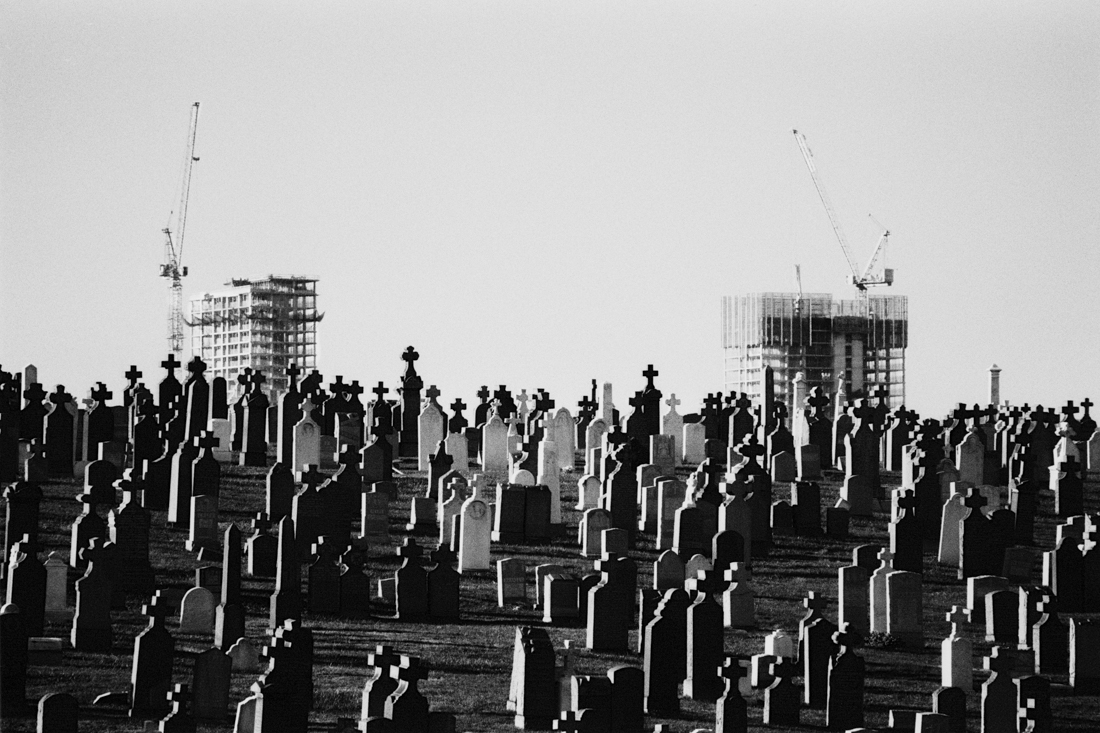 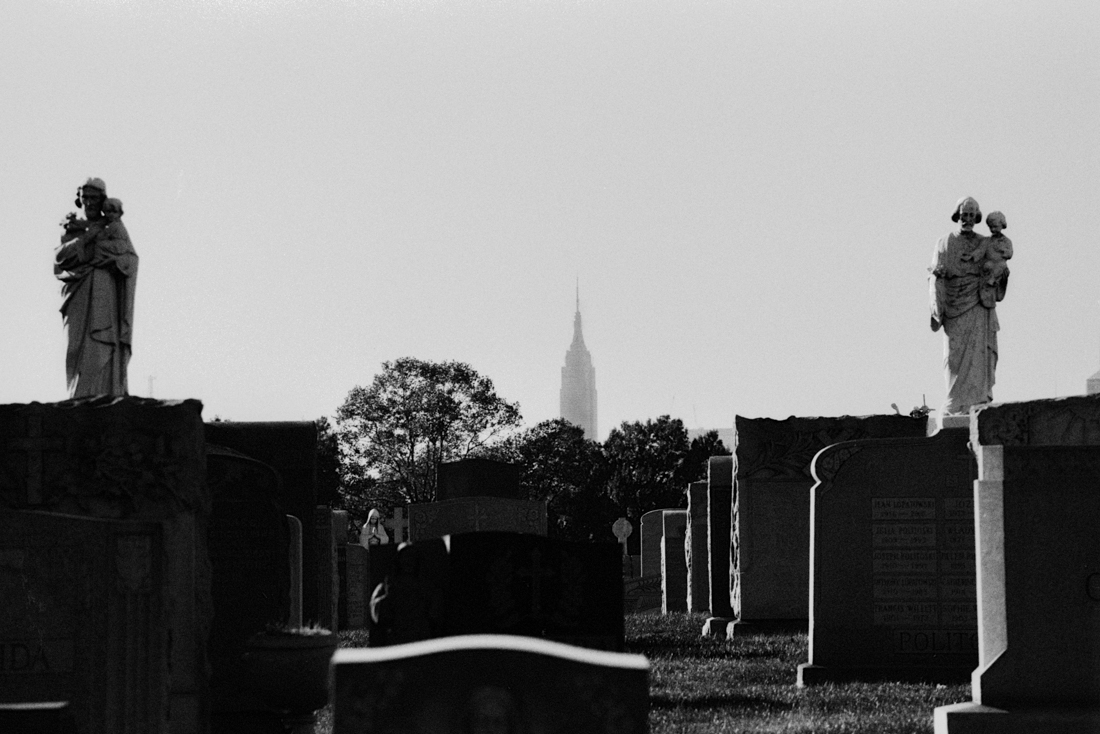 Many cemeteries of Queens are something of mirrored cities to New York City. Across the East River, all kinds of gravestones and tombs erected on the hill like the miniaturized landscape of Manhattan skyscrapers. Compared to sleepless metropolis, this miniature city seems to fall into sleep forever. Such still is only occasionally interrupted by noise from surrounding freeways and several flying birds. While I pass between gravestones and look the skyscrapers of Manhattan emerging from the horizon, these familiar buildings’ shapes suddenly become strange to me. Sometimes, these gravestones before my eyes are mixed with buildings in the far. It’s hard to tell whether it is the top of gravestones or the top of skyscrapers. All urbanites finally will make their last one-way trip from a familiar city to another unfamiliar one. These two cities in front of me are situated in two different kinds of time and space, and they are divided by the boundary between life and death. However, they share some surprisingly similarity and uniformity to some extent.

Holding a Bachelor degree from Beijing Institute of Graphic Communication with a concentration in Advertising, Li Sun graduated from New York Film Academy with a Master of Fine Arts in 2014. Both his parents are engineers. During Li’s childhood, he lived in suburb. After mid-school, his family moved to center city. Compared to young people growing up in the city, Li had a different feeling for city. "We live in a huge steel concrete jungle, instead of the function-oriented high-tech residences alleged by the modernist designers." These experiences are expressed in his works. Li mainly focus on photography territory. Strong lines and contrast color combinations are his commonly style. In January 2015, he published his first photography book 04012013 07:58. His work has been exhibited internationally, including 2016 The Berlin Foto Biennale, The 4th Nanjing International Art Festival and 2015 Photo Independent Art Fair in L.A. His work also featured on Photographer's Forum Magazine. He was awarded the 7th Edition of the Pollux Awards. At present Li Sun works in Los Angles, New York, and Beijing.
SHARE
Support this photographer - share this work on Facebook.
< BACK TO GALLERY